After two men were violently attacked late Saturday night in Williamsburg in an apparent hate crime, the suspect—whose photo has been spread all over news and social media—has turned himself in to police. Brandon McNamara, 25, of Middle Village, surrendered to the NYPD at the Lower East Side’s 7th Precinct. He was promptly arrested and charged with 2 counts each of hate crime assault, assault, aggravated harassment and harassment—McNamara does not have a prior criminal record.

Late Saturday night, two men had left gay bar Metropolitan (559 Lorimer Street). McNamara approached them as they were walking, about half a block around the corner from the bar on Metropolitan Avenue. He shouted a homophobic slur at them and then punched one in the face and shoved the other into a tree. He then beat both men unconscious and fled; the men were taken to the hospital, suffering broken bones. A bystander snapped a photo of McNamara, which was widely circulated this week as police searched for the suspect.

Party With the 94th Precinct Next Tuesday (8/7) 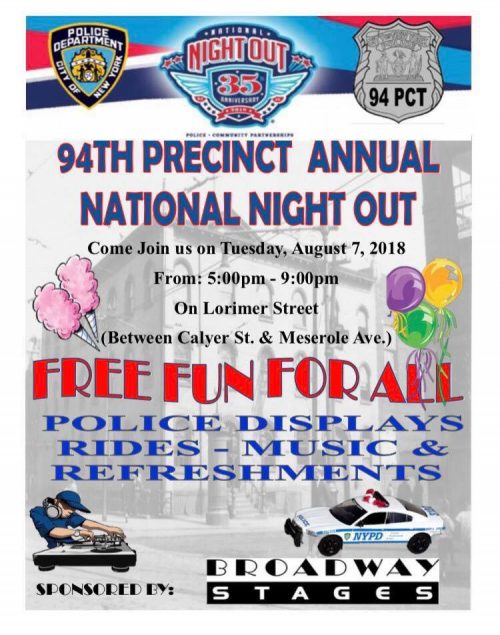 Greenpoint’s 94th Precinct is hosting their annual Night Out next Tuesday August 7th, from 5pm-9pm. Meet n’ greet your local officers, check out police displays, rides and games for the kids, and there’ll be promise music and refreshments too. And, it’s all FREE and happening right in front of the station on Lorimer between Calyer and Meserole. See you there!

Hey Greenpoint, do you know your Neighborhood Coordination Officers?  Out of 153 uniformed members of the 94th precinct, just 8 are NCO officers. Our NCOs are handpicked extensions of the detective squad, and are some of the best trained officers in the precinct, assigned to work directly with community members to address issues that are important to you.

Since NCOs are integral parts of this community, we wanted to know their favorite things about Greenpoint. We sat down with Captain William Glynn, head of the 94th precinct, to learn more about the NCO program, then chatted with each NCO officer to get the lowdown on their go-to spots around town and what they like to do on their days off. Check out their answers below!  END_OF_DOCUMENT_TOKEN_TO_BE_REPLACED 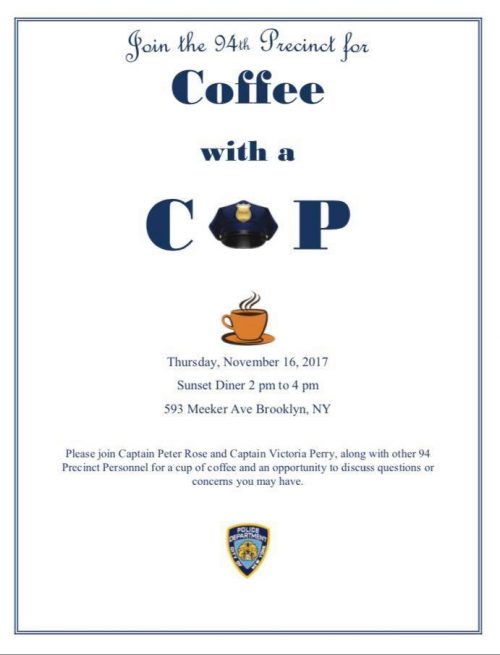 The 94th Precinct is hosting a coffee talk session this afternoon (11/16) at Sunset Diner (593 Meeker Ave) from 2-pm to 4pm. You’ll have a chance to sit down with Captain Peter Rose and Captain Victoria Perry, along with other 94 Precinct Personnel, for a cup of coffee and a chat about your neighborhood questions or concerns.

Several weeks ago, disturbing news of a sexual assault that allegedly occurred on Sutton St. near McGolrick Park broke on social media and rattled the Greenpoint Community.

The assault allegedly occurred around 2am on September 13, two blocks east of McGolrick Park. According to a post that was shared extensively on Facebook, a 34 year-old woman was walking to a deli on Sutton between Driggs and Nassau when she was attacked and raped by a group of teenagers, suffering serious injuries including a knife wound to the neck.

The first of these meetings occurred Thursday, September 22 in the basement of the Park Church Co-op. It was attended by nearly 100 members of the community, as well as several representatives of the 94th Precinct, including Captain Stefan Komar, Community Affairs Specialist Norberto Rivera, and Special Operations Lieutenant Matthew Delaney.

During the course of the meeting, citizens asked questions of the police regarding the alleged sexual assault. What they were told was frustrating, as Captain Komar recounted several inconsistencies and roadblocks in what had been reported to police. END_OF_DOCUMENT_TOKEN_TO_BE_REPLACED

Greenpoint has recently had a wave of robberies and a burglary that have disturbed neighborhood residents. Early in the morning on Sunday, Sept. 25, four separate robberies occurred within 90 minutes of each other.

The first robbery took place around 3:15am at the corner of Jackson Street and Meeker Avenue when four men approached a 26 year-old victim, attacked him, and took his backpack, iPhone, camera, and books.

The second incident took place around 4am at Jewel Street and Meserole Avenue when a 34-year old man was attacked by three men and robbed of his iPhone, $300 in cash, and wallet. The victim was struck in the face during the robbery and required stitches to close a laceration he received.

The third incident occurred shortly after at 4:30am at Leonard Street and Driggs Avenue when two men robbed a 33-year old man at knifepoint of his iPhone and credit cards. This victim was unharmed.

The final robbery took place at Meserole Avenue and Diamond Street and involved two men attacking a 32-year old man and stealing his phone and wallet.

Police have strong video and photo evidence in the robberies and are looking for a group of four men in connection with all of the incidents.

END_OF_DOCUMENT_TOKEN_TO_BE_REPLACED

We have some big issues in NYC to think about after the failure to indict the police offer who killed Eric Garner.

Lighting the Rockefeller Center Christmas tree is a celebration of our city and there was nothing to celebrate yesterday.When I posted about the protests there on Facebook last night, someone commented, “What does this have to do with Greenpoint?” Eric Garner is a New Yorker. And NYC police officers patrol 11222. Enough said.

If you feel so inclined to demonstrate, our favorite local activist Emily Gallagher sent us these tips:

What’s Up With Cops Ticketing Jaywalkers at McGuinness?

We’ve gotten a lot of emails from Greenpointers who are being issued warnings for jaywalking across McGuinness and Nassau over the last few weeks, so we figured we’d do a little investigating.

The local precinct confirmed that they have been stationing there “because it’s an accident prone location,” especially given the recent tragic death of 32-year-old Nicole Detweiler, who was struck by a vehicle while crossing at the intersection in December.

However the reaction to the accident from the police department, almost 2 months after Detweiler was killed, has been inefficient at best and completely illogical at worst.  END_OF_DOCUMENT_TOKEN_TO_BE_REPLACED

UPDATE: Hit and Run on Greenpoint and Franklin (10/28)

We received word this morning that a frightening hit and run/police chase went down on Greenpoint Ave and Franklin last night. A car hit a delivery man on a motorcycle at around 8:20pm; then the driver actually exited the vehicle and ran.

Here’s the story from our tipster:

He hit at least one car and a delivery guy on a motorized scooter, then drove about 30 yards down Franklin. The driver then stopped the car, jumped out and ran away. According to one witness, the passenger ran back to the scene of the accident.

The car that caused the mess was still sitting in the middle of the street when I got there, next to a cop car. The delivery guy had just been loaded into an ambulance. The car had a for sale sign in the window ($4,000 and 95,000 miles as one guy pointed out).

I was told the driver was chased down (not sure by whom) and taken away in a police car.

I hope the guy that got hit is OK – a couple witnesses told me he was moving and responsive but looked like he was in a lot of pain (they used the word “writhing”).

Gothamist reported that EMS transported the victim to Bellevue, but had no additional information on their condition. Several bystanders chased the driver and he was caught by police, who declined to comment.

If you have any additional information about the accident, contact us: greenpointers [at] gmail.com.

Sometimes I wish we had a neighborhood watch for this sort of thing. I wonder if it’s the same guy I have seen in plain daylight peeing with his you know what hanging out on Nassaue Ave by McGolrick Park, and no one (including me) did anything about it. But peeping into windows is a different story.

“There have been several reports of a prowler/peeping Tom on Humboldt Street between Nassau and Norman. It might even go beyond the one block. The latest incident was on Friday but there have been multiple cases of a man looking into windows. In one instance from a few weeks ago he was seen masturbating on someone’s porch (but the eyewitness did not call the police). Everyone who has seen this guy failed to call the police. Word has been spreading down the block and all neighbors are now on alert to call the police immediately at anything slightly suspicious. Police seem to be aware of the situation but no official reports have been filed and I don’t know if they are actively doing anything about it. A common description of the guy (this includes the masturbator) a few people have seen is: white, Polish (someone actually spoke to him so this is not an assumption) and in his late 30s – mid 40s. He seems to be out and about around midnight-1am on weekends.

A pretty generic description, I know. So I guess the overall point is that people in the area should be aware of this, especially if they live on ground level apartments, and call the police if they see anyone suspicious.”

If you see this guy, call the police!