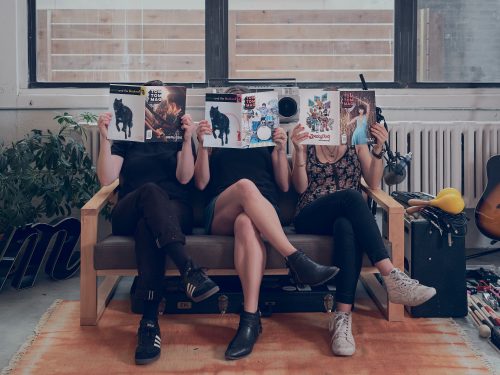 Mindy Abovitz Monk: In 2009, I was working at East Village Radio in the city and I had already been a drummer in New York for about seven years. I had volunteered at Rock Camp for Girls and I also experienced Riot grrrl as it was happening as a teenager and that had brought me to music in the first place. Around 2009 Riot grrrl was seeing a resurgence. People my age and people younger than me were becoming inspired by a movement that had already inspired me. It gave me anxiety thinking that possibly nothing had changed since I was a teenager in the effort to encourage girls and women to be the rock stars that we are. END_OF_DOCUMENT_TOKEN_TO_BE_REPLACED

Since last September, when the art space and creative incubator GAMBA Forest opened its doors at 231 Norman Avenue, it has hosted artists working in nearly every medium and genre. Last Saturday night, over fifteen of those artists came out to support the first of two fundraising events GAMBA is hosting as it gets ready to head to new digs. As artists shared their music, poetry and dance, one attendee welcomed others by passing out flowers.

GAMBA Forest and its welcoming vibes will be relocating in September, and is asking for your help to ensure that “the artist community that has united at GAMBA Forest will not be lost or displaced.” To do that, Melissa Hunter Gurney and Chris Carr, of Brooklyn Wildlife, who run the space, need “to raise the money for the ridiculous amount of funds attached to putting down on a new commercial space in Brooklyn.”

END_OF_DOCUMENT_TOKEN_TO_BE_REPLACED

Hot off the Press: Pics From The Brooklyn Dirty Book Fair

This weekend, Greenpoint played host to the first ever Brooklyn Dirty Book Fair. The event, presented by MATTE Magazine, lasted all day Saturday and Sunday at Point Green Studio (260 Java St), and featured not only titillating books, zines and gifts for sale, but also cheeky performance art (including a cake sitting performance by Lindsay Dye), music and more.

GAMBAZine: An Island of Literary Independence 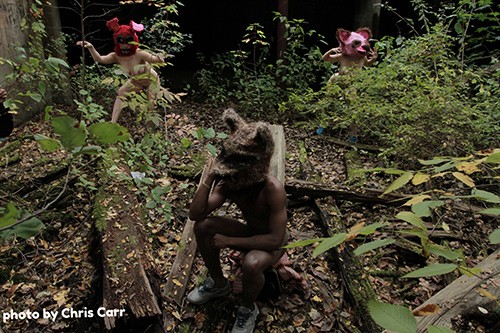 “What happens to all of the pages that people put under the bed?”

That is a question that artists Melissa Hunter Gurney and Chris Carr asked themselves during the months before they birthed GAMBAZine, an international publication rooted in Greenpoint and Bushwick.

From the beginning, Gurney says that GAMBA had an activist slant. The duo wanted to create a literary magazine free of the politics and favoritism rampant in mainstream publications.

“Sometimes it feels like your bio has to look a certain way,” Gurney says. But she explained that she and Carr didn’t want to choose work based on writers’ previous publications, literary accolades, or university degrees.

In the spring of 2014, they founded GAMBAZine. The name came from Gambazini, a mythical island that Gurney had dreamt about months earlier. END_OF_DOCUMENT_TOKEN_TO_BE_REPLACED 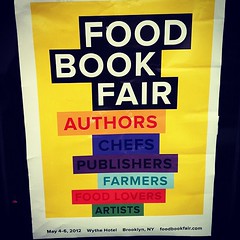 The Food Book Fair was this past weekend at the newly opened Wythe Hotel. When I think of fair I think of tractor pulls, farm animals, funnel cakes, and a lot of hoopla. I expected the Food Book Fair to be convention style, with tables, shwag, food samples, commotion. Instead there was a tiny and well curated “book store” in a nook in the hotel lobby, and talks and panel discussions were held in a beautiful ballroom. Food was for sale, and looked outstanding. And there were expensive dinners each evening. Hoopla came in the form of a pigeon sneaking into the event and making a raucous and flying up into the projector screen. The beast wrangler in me caught the scared bird and released it. 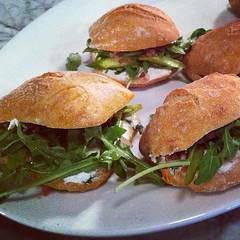 Over the weekend I attended 6 talks, which were well organized, very informative and hosted by leaders and innovators in the field of food, writing, cooking, publishing and technology. All were followed by book signings. I left with a wealth of knowledge and a brain full of inspiring ideas.
More public access, in the form of free events, and food samples is something I hope they improve upon for the next fair. Important info about the food industry as well as resources for hopeful food writers shouldn’t come at a price. That being said, I am sure a 3-day long event at the Wythe hotel was costly.

What follows is a brief summary of each talk I attended.