Like many other Greenpointers, I heard the news of the closing of the American Deli (97 Franklin St.) with great sadness. The bodega has been a neighborhood fixture for the twenty-five years I have lived here and its closure is just another sign of the disappearance of the once vibrant Puerto Rican community in North Brooklyn.

END_OF_DOCUMENT_TOKEN_TO_BE_REPLACED

Community Came Together for Gun Safety Townhall in South Williamsburg

On Saturday, April 7th, local politicians, policy advocates and community members gathered at MS 50 (183 South 3rd Street) for a Townhall meeting on gun violence. The event, hosted by Congresswomen Carolyn Maloney and Nydia M. Velázquez, took place on National Day of Action, following the March for Our Lives Protests, and included a panel of community advocates from New Yorkers Against Gun Violence, Moms Demand Action for Gun Sense in America and Los Sures. The politicians and advocates all see gun violence in the United States (and right here in New York City) as a public health issue, and have framed their local advocacy and and legislative agendas to tackle the issue through that lens.  END_OF_DOCUMENT_TOKEN_TO_BE_REPLACED 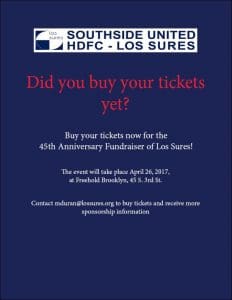 Southside United HDFC-Los Sures—a local non-profit committed to affordable housing, community development and advocacy in South Williamsburg—is celebrating their 45th anniversary this year, and kicking it off with a fundraiser on Wednesday, April 26th at 6pm. Freehold (45 South 3rd Street) will host the event. For tickets and sponsorship opportunities, contact [email protected].

“We hope that the community members will come out in large numbers to support our 45th anniversary fundraiser because it is through their involvement that we are able to provide the menu of services that we do,” said Los Sures’ Executive Director Ramon Peguero, Esq.

Over the years, their their mission has broadened, and now they not only help to develop and manage affordable housing units, but they also operate a weekly food pantry, hydroponic farm, and senior center and provide a variety of social services. They also run a local museum, El Museo de Los Sures (120 South 1st St.), which hosts artworks that celebrate diversity and the history of the neighborhood. Their next exhibit’s opening reception is on April 20th at 6pm.

If all of this sounds like a pretty cool way to support Williamsburg’s cultural heritage, you can also volunteer for Los Sures—click here to find out more.