At the celebration for the opening of the new $873 million Kosciuszko Bridge, New York Governor Cuomo flaunted how an increased number of lanes would speed up traffic by 65 percent.

Data compiled in September  — the first full month of operation since the bridge’s second-span opened — reveals no improvement for drivers going from Queens to Brooklyn during rush hour and an average three mile per hour reduction in speeds for drivers headed to Queens, according to a study by independent consultant INRIX, first reported by the Wall St. Journal. END_OF_DOCUMENT_TOKEN_TO_BE_REPLACED

The Kosciuszko Bridge’s second span, which includes four new bike lanes and a pedestrian walkway, opens to traffic on Thursday as Governor Cuomo hosts a week of events in commemoration. Four lanes of Brooklyn-bound traffic will open and the first span will be reconfigured for five Queens-bound lanes on Thursday.

The original Kosciuszko Bridge was a truss bridge that opened in 1939 and was demolished in 2017 after the first span of the new cable-stayed bridge opened.

The new $873 million structure is being marketed by Governor Cuomo as “on budget” and opening four years ahead of schedule. END_OF_DOCUMENT_TOKEN_TO_BE_REPLACED

The plans to transform seven acres beneath the Kosciuszko Bridge into “a public park, cultural destination, and ecological hub” were unveiled last month by the North Brooklyn Parks Alliance.

The ethos behind the design of the project draws contrast to “glamorous public spaces” like the Highline in favor of a “process-place that is firmly rooted in the local,” according to the presentation (PDF). END_OF_DOCUMENT_TOKEN_TO_BE_REPLACED 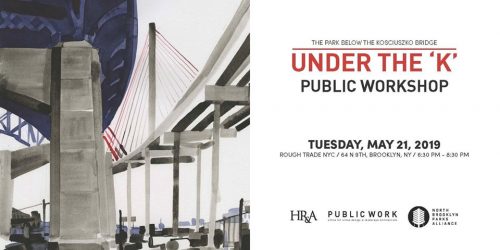 A visioning workshop that is open to the public to help plan the future park and green space under and around the new Kosciuszko Bridge will take place next week.
The “Under The K” public workshop is being hosted by the North Brooklyn Parks Alliance and the landscape architects Public Work on Tuesday, March 21, at Rough Trade (64 N 9 St.); registration is free.

NPBA was awarded a $100,000 grant via the Greenpoint Community Environmental Fund in 2018 to help convert to the area surrounding the Kosciuszko Bridge into a public park. END_OF_DOCUMENT_TOKEN_TO_BE_REPLACED

And speaking of rising again: The New York State Department of Transportation has unveiled its plans for the next stage of construction of the New Kosciuszko Bridge. The DOT expects the final section of the span to be completed in 2019 or 2020.  END_OF_DOCUMENT_TOKEN_TO_BE_REPLACED

A Goat on the Lam, Explosions of Love and Brooklyn in Paradise — The Hook-up (10/5)

The psalm says the Lord is our shepherd, and nobody seemed to know it better this week than the abandoned billy goat who took shelter under the steps of the Russian Orthodox Cathedral of the Transfiguration on North 12th and Driggs. Officer Jamar Ferguson, newly-dubbed official goatherd of the 94th Precinct, corralled the freelance goat into a cage and named him “Lil’ Ferg.” END_OF_DOCUMENT_TOKEN_TO_BE_REPLACED

Final Demolition of the Kosciuszko Bridge This Sunday 10/1

So far this summer, New Yorkers have reacted to the demolition of the Old Kosciuszko Bridge in a variety of expressive ways. There were the illicit parties held on the Bridge ahead of the scheduled July demolition, and the group of urban vigilantes ready to defend the bridge from demise with wolves and swords.

The city itself decided on a more muted end to the 1939 span that crosses Newtown Creek, connecting Greenpoint to Maspeth, Queens, than these events, or even the Bridge’s namesake, Tadeusz Kościuszko, a Revolutionary hero in both Poland and the United States, might warrant. Instead of the scheduled July explosion, the main span of the bridge was lowered onto a barge in Newtown Creek.

But, anyone who was hoping the bridge would go out with a bang can get psyched. While the final demolition was supposed to take place September 24, the new demolition date is now This Sunday, October 1st at 8am.

A Duck on the G Train, A Massage For Your Period and the Best Place to Photograph The Kosciuszko Bridge—The Hook-Up 8/25

Do you feel like things have been pretty quacked in Greenpoint this week? You’re not wrong. On Monday night, a leashed duck boarded the G Train, and as you can see from the video, he was not too pleased to be there.

If you’re feeling as stressed as that duck, and you think your period might have something to do with it, Massage Greenpoint (37 Greenpoint Avenue) has you covered. They’ve just rolled out “The Moon Cycle Massage,” aimed at alleviating those monthly aches.

The Brooklyn Daily Eagle went on a hunt for the best place in the neighborhood to photograph the new Kosciuszko Bridge, and concluded it’s a tough task. But they did manage to snag a pic of an ultra groovy bus on Lombardy Street.   END_OF_DOCUMENT_TOKEN_TO_BE_REPLACED

The Kosciuszko Bridge is Falling Down: Pieces Barged Out Today, And You Can Watch!

All day yesterday (Tuesday) the main span of the Kosciuszko Bridge was lowered onto barges on Newtown Creek. The bridge segments will be barged out of the Creek today, from 10am to 12pm. The pieces will be taken to a recycling facility in New Jersey. The Newtown Creek Alliance has a handy timeline of the bridge’s demolition, and future plans for a park on the Queens side of the new bridge.

Below, the NCA has put together a map of the best viewpoints for today’s barging, which include the very end of Greenpoint Avenue, the Newtown Creek Nature Walk, under the Pulaski Bridge, and the end of Manhattan Avenue. If you’re one of the lucky seafaring few in a boat, there will be security zones in place during lowering and barging; boaters are required to stay a minimum 500 feet away from the working barges.

The first death on the new Kosciuszko Bridge happened this week. END_OF_DOCUMENT_TOKEN_TO_BE_REPLACED