A small sample of the Viet cajun crawfish dinners were available to order last week and quickly sold out.

Di An Di will have “45ish” orders of their crawfish dinner on Wednesday starting at 5 p.m.; for $35 you get two lbs of crawfish, four shrimp, and a piece of kielbasa sourced from Kiszka in Greenpoint that is cooked with yukon potatoes, mushroom, onion, and corn, and tossed in a mildly spicy lemongrass and garlic butter sauce; order pickup or delivery via the Di An Di website.

45ish orders of Viet Cajun crawfish dropping tmw at 5pm over at @didi.nyc! $35 gets you 2 lbs of viet Cajun 🦞, 4pc 🍤 , 🥔 , 🌽 and Keilbasa from our neighbors in Greenpoint Kiszka! ONLY available for pickup / delivery via our delivery website (no caviar or grubhub sorry we’re working on expanding our delivery area), no preorders plz, no mods and no phone in orders plz! We’re a small team! Follow us over at @didi.nyc to get the link to order tmw! Be safe NYC! 📷: @spleetata

With his exceedingly popular noodle den, Di An Di (68 Greenpoint Ave.), chef Dennis Ngo’s plotting to take his contemporary Vietnamese fare to new heights as the restaurant approaches its first anniversary in Greenpoint. Ngo’s a go-getter. This statement will likely come as no surprise to any who knows him–the chef has been hustling his way through New York City’s gritty culinary scene for almost 13 years now.

Ngo and his partners Kim Hoang and Tuan Bui opened Di An Di last May, after years of flirting with the idea of bringing a specialty pho shop to New York–where they’d already made their mark in elevated Vietnamese cuisine with their beloved little Lower East Side shop An Choi.

Btw.. If you don’t order your Phở Gà with a side of Cơm gà and a side of clam pizza, you just aren’t living.

There’s the crowd-pleasing pho–a rotation which, at the moment, features a selection of buttery beef soups, a soulful veggie, and a clean, fragrant chicken noodle. But there’s also the infamous Vietnamese “pizza”–involving golden shears and a crispy grilled rice paper dusted with a toothsome medley of crumbly pork, shrimp floss, and their house-made hot sauce–and an understated, yet revelatory fried spring roll, which you can cradle in a lettuce leaf as you dunk in a fishy sauce.

Ngo, like his partner Hoang, hails from Houston, home to one of the largest Vietnamese communities in the country. From an early age, he dined on the foods of an era that predated him, recipes that Vietnamese immigrants took from their hometowns and–with the ingredients available to them in Houston–recreated with a new distinct taste. It’s the flavors and economic sensibility of Houston’s sprawling diaspora cuisines that infuse Di An Di’s menu. END_OF_DOCUMENT_TOKEN_TO_BE_REPLACED

The end of year lists and awards for new Greenpoint restaurants keep piling up. While Greenpoint has plenty of under the radar affordable eats, some higher end establishments like Oxomoco (128 Greenpoint Ave.), which currently holds the neighborhoods’ only Michelin star, continue to win praise.

French-Canadian restaurant Chez Ma Tante (90 Calyer St.) was awarded “neighborhood restaurant of the year” by Eater NY, as voted by their readers for “serving clean, flavorful fare with just enough edge to keep things interesting. That means dishes like a pig’s head terrine next to a particularly stunning Caesar salad, or a pate as an appetizer before a standout chicken confit.”

Thanks @eater_ny for awarding us best neighbor hood restaurant! But also thanks to all our neighbours!

The modern Vietnamese restaurant Di An Di (68 Greenpoint Ave) was voted in the same reader’s poll as having “best design of the year,” for its “neutral palettes, neon signs, rounded corners, copper-colored accents, and lots and lots of well-placed plants.” The pho is great too.

The”top NYC restaurant newcomers of 2018” list as identified by editors in a separate Eater NY post shouts out Di an Di and Paulie Gee’s Slice Shop (110 Franklin St.) for their quality food. Hint: you should really try Paulie Gee’s Freddy Prince slice that includes a hidden bottom crust of full of sesame seeds.

END_OF_DOCUMENT_TOKEN_TO_BE_REPLACED 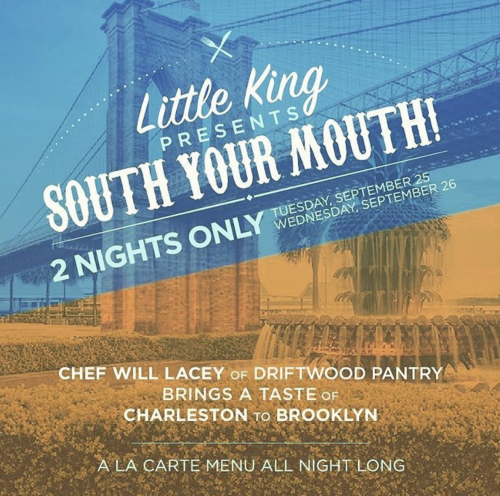