A Look at The New All-Day Cafe, One Bedford

It wasn’t that shocking when Nights & Weekends closed in early March. The bar had always been the “cool” spot while occupying the triangle space of the Bedford/Nassau/Lorimer/McCarren intersection. But the crew parted ways with the owners of Five Leaves back in November, and it was destined to become something else. Thankfully, it wasn’t closed for long. One speedy renovation later, it’s now open as One Bedford. Not only is the interior redesigned, the restaurant now has a whole new day-long menu.

The morning shift is your typical café with Devocion coffees and lattes, plus a small selection of pastries. The one receiving all the press is the Cornetti Al Mascarpone. It looks like a croissant in shape, but the flaky layers are filled with whipped raspberry mascarpone cheese and it’s covered in a raspberry orange blossom glaze. Not something you eat every day for breakfast, but if you’re one who can handle sweets in the morning, this is definitely worth the trip. 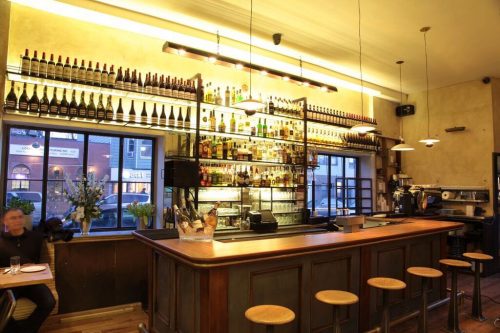 While casual Nights and Weekends was very tropical in flavor, One Bedford is decidedly more continental. The cocktail list alone sets the theme. You’ll find classic aperitifs like a kir, a ricard, and a negroni for your pre-dinner drinks before deciding from the nineteen-deep cocktail menu rich with vodka, wine (red, rosé, and sparkling), and rum tipples, many with citrus twists. Drinks will set you back $12.

The dinner menu is a good mix of lighter seafood fare and comfort food. A few dishes I’ll be wanting on hot summer nights are the paper-thin slices of zucchini topped salty capers and slivers of parmesan; the seared octopus atop a slightly spicy caponata; and the shrimp a la plancha with jalapenos and citrus aioli. For those who are fans of cracker-thin crust pizzas—the only type that hasn’t become “a thing” in New York City—finally have their pie joint, but those who aren’t will be left slightly disappointed. It is really an acquired taste.

It’s in the entrées that you find your requisite burger. There are two types, one is composed of a beef/chorizo pattie with baby Swiss cheese, which I’m not entirely sure works since the chorizo’s spiciness (and grease) are a bit overwhelming. The other burger, “The Mikey,” is beef with caramelized onions and aioli. There’s a spectacularly done rustic chicken with morel-infused sauce and polenta. More comfort can be found in the half moon ravioli that might get more neighborhood love if they were renamed pierogi. The thicker, chewy dough surrounding farmer’s cheese, potato and onion leans more Eastern European than Italian, though brown butter, sage, and pine nut topping make it an understated fall dish I crave year-round. 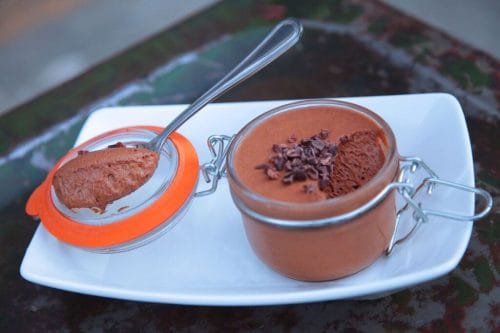 In the desserts, they do make a good effort towards a very boozy flaming baba au rhum, though it might be better presented in a bowl and slightly less syrup. I preferred their airy chocolate mousse made with Valrhona chocolate and topped cocoa nibs. Those of you who need late-night eats, there is an entirely different menu during the early morning hours. Word on the street is chicken and waffles meets French toast riff is available, along with Croque Monsieur and other breakfast-like items.