Williamsburgs’ Enchanted Fillmore Place and the Author Who Immortalized the Street

Thanks in large part to the writings of celebrated author Henry Miller and the stately Italianate houses on the street, Fillmore Place were landmarked in 2009 and will forever preserve the charm that enthralled the young Miller, who first saw it as a child in the late 1890s. The atmosphere of late 19th century Williamsburg is rtetained on the street in an area that rapidly gentrified over the past decade and lost much of its history: Fillmore Place is a gem and a throwback to an earlier era of local history. Gazing upon the austere brick facades of the old row houses on the south side of Fillmore Place, it is easy to imagine Williamsburg before the bridge and why Miller loved the neighborhood so strongly. 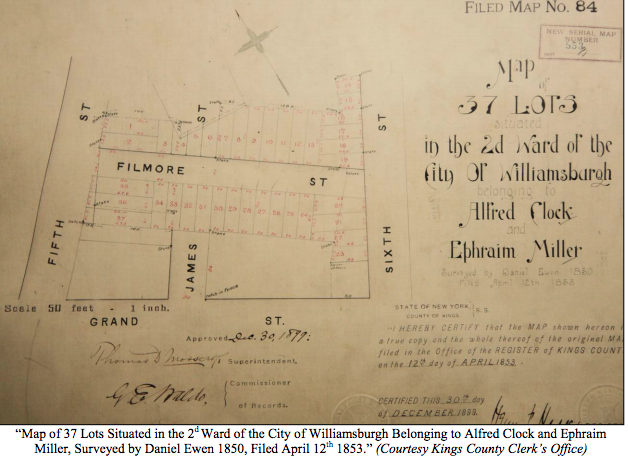 In the 1840s two merchant tailors could see that Williamsburg was prime real estate ripe for development. In 1846, Connecticut-born businessmen Alfred Clock and Ephraim Miller began acquiring parcels of land on the block bounded by Grand Street, Roebling Street, N. 2nd Street (renamed Metropolitan Avenue), and 5th Street ( Now Driggs Avenue). They purchased 12 lots from one owner and Clock and Miller also acquired three more lots from another landowner in 1847. Finally, they added a small strip of the David Van Cott farmstead in 1848. Now owning a contiguous parcel of developable land, Clock and Miller then hired a surveyor in 1850 to lay out a new, more regularized set of city lots on the property. The cumbersome dimensions of the block—each frontage was over 300 feet in length—also lead the pair to cut a narrow road through the middle of their development, which they named Fillmore Street (soon renamed Fillmore Place), after the president of the United States at the time Millard Fillmore.

In 1852, an advertisement in the New York Times proclaimed,“Messers. Clock and Miller have commenced opening, at their own expense, a new street, from
South [Sixth] and Fifth-Street, between Grand and North First. It will be built up with magnificent dwellings.” Within a couple of years, many of the lots on the north side of Fillmore Place had been sold to individual property owners. Samuel G. Baxter, for example, purchased lot on September 30, 1853 for the sum of $725. Five years later he sold the same property for $4,000. These prices probably show that—at least for the parcels on the north side of the street—Clock and Miller were selling unimproved lots.

It was a different story for the south side of the street, which was speculatively built for Clock and Miller as a uniform development. Property records show that the pair retained possession of most of the lots on that part of the street into the late 1850s and early 1860s, several years after they had sold off the properties on the north side. It appears that by 1854 they had hired builder Jacob Sheppard to construct eight houses there, while Sheppard’s associate John Rourke likely constructed a ninth. The finished row, today numbers 12-28 Fillmore Place, was almost identical and the uniformity of these Italianate houses explains a lot of the architectural charm of the street.

By 1881, the empty lots on the north side of the street had been built with houses that mirrored the row houses across the street and the pretty little block has changed little since then in its appearance. Miller’s father was a German-American tailor. Was there some business connection to Clock and Miller? We do not know, but the writer, who was born in Manhattan, moved to the area in the first year of his life and celebrated it in print for decades after he left it.

The German-American Miller family moved into the house at 662 Driggs Avenue a few years before the opening of the Williamsburg Bridge in 1903. The area was heavily German in those days, but the bridge would quickly change the ethnic composition of the area. Miller whose writings were so salacious that they could not be published for decades left when Jews from the Lower East side used the new bridge to enter the area. Miller’s writings sadly contain horrible anti-Semitic references to the newcomers, although in other writings he writes warmly of Jews.

His family moved on to more heavily German Bushwick, though he returned to the area he loved to go to attend Eastern District High School. Miller soon left Brooklyn for France, but for decades after his autobiographical works such as “Black Spring,” “Tropic of Cancer,” and “Tropic of Capricorn” drew heavily upon his memories of living opposite of the elegant street, though he lived on Driggs Avenue for less than a decade as a young child from 1891-99.

This epoch, however, proved to be a powerful happy recurrent element in his writings. Reflecting on his life in a New York Times article from 1971, Miller recalled, “I began my sojourn in Paradise in the first year of my life at 662 Driggs Avenue, Brooklyn, and I remained there until 1899…these few years are ineradicably engraved in my mind.” Many of Miller’s published works contain lengthy descriptions of Fillmore Place and his home perpendicular to it on Driggs. In “Black Spring,” Miller writes that “there were three streets—North First, Fillmore Place and Driggs Avenue. These marked the boundaries of the known world.” His description of Fillmore Place in “The Tropic of Capricorn” perfectly captures many people’s love for the historic little block: “[it was] the most enchanting street I have ever seen in all my life. It was the ideal street—for a boy, a lover, a maniac, a drunkard, a crook, a lecher, a thug, an astronomer, a musician, a poet, a tailor, a shoemaker, a politician.”

Miller perfectly preserved in print the world of 1890s Williamsburg. Miller, who as a little boy played on the street, immortalized the quaint little street he so adored. If you do not know this timeless section of Williamsburg, then it is worth the trip. Reading Miller and walking in the area, you can perhaps envision the little German-American boy playing on the street he loved above all others.