Mayor Bill de Blasio, now in his lame duck era, has been cheerleading the Amazon search since last year, coming full circle from his days as NYC public advocate when he led the effort to keep Wal-Mart’s attempted NYC expansion at bay. 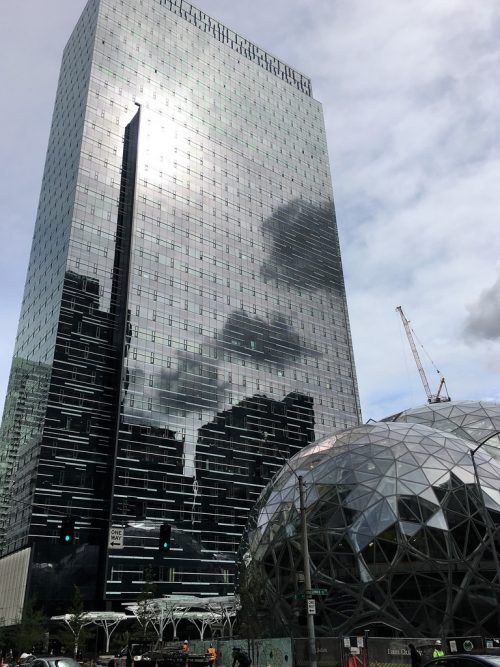 A blog post this morning from Amazon outlines the tax incentives for choosing NYC:

“Amazon will receive performance-based direct incentives of $1.525 billion based on the company creating 25,000 jobs in Long Island City. This includes a refundable tax credit through New York State’s Excelsior Program of up to $1.2 billion calculated as a percentage of the salaries Amazon expects to pay employees over the next 10 years, which equates to $48,000 per job for 25,000 jobs with an average wage of over $150,000; and a cash grant from Empire State Development of $325 million based on the square footage of buildings occupied in the next 10 years. Amazon will receive these incentives over the next decade based on the incremental jobs it creates each year and as it reaches building occupancy targets. The company will separately apply for as-of-right incentives including New York City’s Industrial & Commercial Abatement Program (ICAP) and New York City’s Relocation and Employment Assistance Program (REAP).

The community will benefit from New York City providing funding through a Payment In Lieu Of Tax (PILOT) program based on Amazon’s property taxes on a portion of the development site to fund community infrastructure improvements developed through input from residents during the planning process. Amazon has agreed to donate space on its campus for a tech startup incubator and for use by artists and industrial businesses, and Amazon will donate a site for a new primary or intermediary public school. The company will also invest in infrastructure improvements and new green spaces.”

In return, Amazon says that it plans to invest locally in public green space and infrastructure including a school in LIC, and space at the new campus for a start-up incubator to boost artists and early-stage businesses.

The corporation is also offering millions of dollars to engage its neighbors at the Queensbridge Houses with training programs and workshops.

Despite the city’s announcement of plans to invest $180 million in LIC infrastructure, the area severely needs more schools and greater sewer capacity to absorb tens of thousands of new residents.

“Offering massive corporate welfare from scarce public resources to one of the wealthiest corporations in the world at a time of great need in our state is just wrong,” Gianaris and Van Bramer said.

Cuomo was not as critical in his statement:

“When I took office, I said we would build a new New York State – one that is fiscally responsible and fosters a business climate that is attractive to growing companies and the industries of tomorrow. We’ve delivered on those promises and more, and today, with Amazon committing to expand its headquarters in Long Island City, New York can proudly say that we have attracted one of the largest, most competitive economic development investments in U.S. history.”

With an average salary of $150,000 per year for the tens of thousands of new jobs Amazon is creating in Queens, economic opportunity and investment will flourish for the entire region. Amazon understands that New York has everything the company needs to continue its growth. The State’s more than $100 billion transportation infrastructure program – the most ambitious in our history – combined with our education initiatives like K-12 tech education and the first-in-the-nation Excelsior Scholarship program, will help ensure long-term success and an unrivaled talent pool for Amazon.”

As both Cuomo and de Blasio are trying to position themselves as 2020 presidential contenders, they’re banking on tying their legacies to one of the world’s largest corporations with a growing list of concerns from watchdogs.

Amazon has been courting Trump’s favorite deportation task force, ICE, to use its “Rekognition” surveillance tool featuring facial recognition tech to track people in real time and identify pedestrians, according to the ACLU.

The hiring practices of Amazon have also come under fire. Utilizing an AI process for sorting applicants, the corporation received criticism for discriminating against female applicants, Reuters reports.

Amazon is also in the midst of a push to open 3,000 cashierless Amazon Go stores, with one store already planned in Manhattan, that would sell everyday items to compete with smaller convenience stores and Wal-Mart.

As Wal-mart is making moves to offer NYC residents same day delivery via Jet, with a 205,000-square-foot warehouse in The Bronx, Amazon is seeking to beat them to the chase.

With homelessness in NYC reaching Depression-era levels at over 60,000 people, the vacancy levels of apartments in the city is also skyrocketing to more than 247,000 vacant units.

Congressmember-elect Alexandria Ocasio-Cortez, who will rep part of Queens, points to the threat of further displacement due to rising rents.

Displacement is not community development. Investing in luxury condos is not the same thing as investing in people and families.

Shuffling working class people out of a community does not improve their quality of life.

Real estate brokers in LIC are already reporting a surge in sales via text message from eager buyers seeking to ride the Amazon wave of rent inflation, according to the Wall Street Journal.

Amazon also announced a third and smaller site in downtown Nashville, Tennessee, where it plans to install a regional operations center with 5,000 new jobs.