And the good times didn’t stop there. Next up was actually a jump back, to Scratch Acid, the band before Jesus Lizard. After that, was the Cherubs.

I’ll try to break down the experience of hearing “Baby Huey” for the first time, because it kind of encapsulates my whole reaction to hearing something from Austin (or San Antonio, in the Butthole’s case) for the first time.

At the risk of trying to sum up a few bands who’re all very different, my adulation for the music comes from the fact that they each in their own way abuse the idea of music, treat it like a rag doll that’s being thrown around a room, but at the end of the day have enough wherewithal to not leave the listener hanging, to not waste their time, and let them still walk away with a song, and an experience.

All right, for “Baby Huey”, there’s the sample. If you’re friends with drummer Brent Prager on social media, there was a big reveal last May (!!!).

There’s the menacing riff. Is menacing the right word? It’s heavy like Black Sabbath, but not as prolonged, and too heavy for punk. It absolutely skips over No Wave and Seattle, in my opinion, with maybe the exception of Mudhoney. And there is no (huge sigh of relief) room for shoegazing. This is like the exact dead opposite of shoegaze. It’s like a third or fourth or fifth thing all on its own.

Then bass, drums and vocals all come in, like three drunk people crashing through a door at once.

The drums and bass are frayed but tidy (?), and make for a formidable rhythm section. That is always something to be reckoned with in these bands.

For the non-bass and non-guitar and non-drum part, I want to write the word ‘singer’ or ‘vocals’ here but not sure which or if either apply. It’s a whine, but not an annoying one.

The singer could be four, or sixteen, or thirty.

If it is annoying, it’s in a way that someone could somehow listen to it all day. Like a bratty kid you can’t help but like. And while the words themselves are obscure, the outline of a chorus or verse can be made out. Or can it? Is that the chorus it starts off with? And if so what does it transition to? I think I hear the word “Huey,” but I’m not sure.

Then it all wraps up, like someone finishing an argument that you might not have understood a word of but all you know at the end of it is they are fairly certain they made their point, and that your life is the better for it. 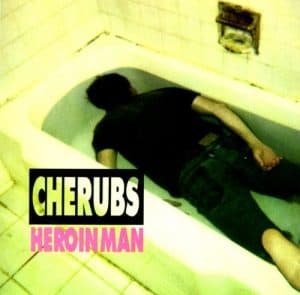 “Baby Huey” is like the hit off Heroin Man. According to the band’s wiki, the album has a foreboding background, occasioned by a friend’s overdose. For all the disarray, for all the suspension-of-disbelief, there’s a levity to the record. Gravitas, if we can get fancy for a moment. It’s something that’s missing from a lot of current music, and is instructive of the sound from that time.

There are deep cuts on Heroin Man—“Icing” is a must hear—and both the newer record and EP, 2 Infynyty and Fist in the Air continue to throttle while even delving into melody and taking another route. Check them all out.

It was good to see their name back in print in May, when they played Saint Vitus, and it’s good to know they’ll be here in a week again as well.