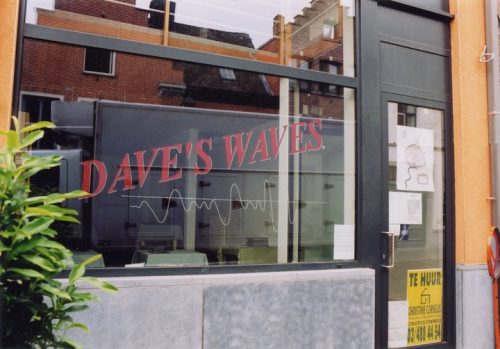 For two weekends in September (14-16 and 21-23) the Sunview Luncheonette (221 Nassau Avenue) and experimental composer David First team up to present Dave’s Waves Sonic Luncheonette. Below, David gives an overview of what inspired the project, all its previous incarnations, and what to expect during the two weekends.

Greenpointers: How’d the idea for a sonic restaurant come about?

David First: I was asked to participate in an exhibition in Lier, Belgium in 2002. At the time I had begun mucking around in the area of brainwaves and binaural beats because it was something I had already been doing in my music. The “new age” community likes to make a correlation between the alpha brainwave range and the Schumann resonances, so, of course I found a trove of fascinating, fantastical stuff online that I dove into unconditionally. When I decided I wanted to present this work in Lier, the idea of making it a restaurant where you order these different compositional “dishes” from a menu seemed like a fun way to do it. END_OF_DOCUMENT_TOKEN_TO_BE_REPLACED

One morning at the McGolrick Park Farmer’s Market last Fall, I had the opportunity to taste a spirit I didn’t know much about. Though, coming from a half-Italian family, I was not a complete stranger to amaro. And living in a bar culture like Brooklyn’s, the spirit turns up every now and then too.

But both encounters were prohibitive. Being a kid at family parties, trying something red in color, you want it to taste a certain way (like Dr. Pepper). Amaro got quickly filed under “gross” and “adult,” which I filed under “boring.” And today, going to a fancy bar, the prospect of a sixteen dollar cocktail sometimes has me looking for the beer list, specifically “cans.”

So, running into the Greenpoint-made amaro brand St. Agrestis on that Sunday in the park cut through my personal red tape.

First off, the label is eye-catching: a simple blue print of a woman holding a branch in one hand, and a small medicine bottle in the other. Then there’s the name. How, after twelve years of Catholic school, did I not know of a St. Agrestis (it turns out St. Agrestis is not real!)? Then there’s the color. It’s a deep shade of red, not quite letting you see all the way through the bottle, but sort of half-way through.

The whole package was intriguing, as was the flavor. Which is on the right side of bitter, and the right side of sweet— it sort of approaches both, and pulls away just before either becomes too much. In any case, I felt it was cause enough to buy a bottle and to later follow up with its maker, Louis Catizone, to find out how this mysterious alcool is made. END_OF_DOCUMENT_TOKEN_TO_BE_REPLACED

And the good times didn’t stop there. Next up was actually a jump back, to Scratch Acid, the band before Jesus Lizard. After that, was the Cherubs. END_OF_DOCUMENT_TOKEN_TO_BE_REPLACED

The talk, coupled with the sign, elicited a chorus of mixed replies: some owners praised the idea of gravel, noting it would clean their dog’s paws and possibly help with the endless amounts of broken glass that seemed to rise, Poltergeist-like, out of the mud after every heavy rain. Others were more wary, saying the mulched and dirt-y run provided pets a little relief from the concrete of the city, and the switch to gravel would take that cushioning away. Also, there was speculation about dust—an oft-heard complaint about the newer dog runs in Cooper Park and Bushwick Inlet. END_OF_DOCUMENT_TOKEN_TO_BE_REPLACED

Even Keel: Wow-worthy Nature Inspired Soaps Made in Greenpoint

I recently had the chance to get burgers and beer with Greenpoint resident En Tsao, in the backyard of Williamsburg establishment The Meat Hook. En is the brains and the creative force behind Even Keel Soap.

Even Keel’s products, in the face of a market flooded with all kinds of natural, organic, and locally sourced ingredients remain unique and fresh.

“It’s interesting,” he says, “to see artists respond when you put limitations on them.” The limitations are familiar to anyone who attends shows or is a musician in New York. They come down to two things: noise and space. “It’s almost always worked out. One or two cases, maybe.” One aspect that keeps things going is a good relationship with the neighbors. “They all have my number. They’re great. Sometimes I get a text saying, ‘hey, last night was a little loud,’ but for the most part, the relationship is really good.” Another is just figuring out who could and should play. Who does the approaching? “It’s pretty much word of mouth, musicians putting me in touch with other musicians,” he says. END_OF_DOCUMENT_TOKEN_TO_BE_REPLACED