For the past few years, an under-the-radar celebration of all things sumo has been regularly taking place at Brooklyn Brewery. Hosted by photographer Michael Harlan Turkell and owner of The Brooklyn Kitchen Harry Rosenblum, the evening centers around chankonabe, the stew sumo wrestlers consume while training and a live stream of grand tournaments. But the stew isn’t all there is to eat, there’s bento boxes, Japanese whisky, shochu, sake, tea, and Brooklyn Brewery’s own beers on tap for every guest. And the 17th round of Sumo Stew is next Wednesday, the 15th.

Turkell & Rosenblum do everything possible to turn Sumo Stew into a joyous communal experience while teaching their guests about the finer traditions of sumo. For instance, you’re greeted with bowls of chankonabe, a protein-rich stew made of meats and vegetables, that helps sumo wrestlers gain weight before tournaments. At Sumo Stew, the chicken and yuba chankonabe is made by Brooklyn’s own Momo Sushi Shack. 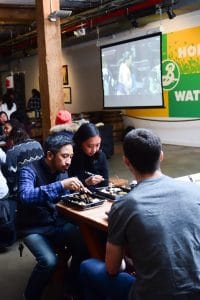 After you feel one with the wrestlers, you can get your bento box and begin making friends. The current plan for the Wednesday’s bentos is Wasan’s spicy koji-miso-marinated grilled chicken by Wasan; Otafuku’s pork belly okonomiyaki; Oka’s ramen with calamansi ponzu, panko, prosciutto & yolk; and Samesa’s carrot and turnip pickles.

Brooklyn Brewery’s own Sorachi Ace, named after the Sorachi Ace hops developed in Japan in the 1970s, is, of course, a cornerstone of the evening. But if farmhouse ales aren’t your thing, you can have a “Makushita’s Revenge” made with Nikka Coffey Grain, Mizu Shochu (made with fermented barley and black koji), and Soto Sake.

But it’s not all food. Everyone gets their own Wuhao New York tenugui, the traditional hand-dyed Japanese cotton towels, as a souvenir. Or, if you really want to go all out, Kikuichi, a company whose history dates back to the time of the samurai, will be selling their beautiful Japanese knives. Plus Master Knife Sharpener Mr. Ryusuke Takahashi will be on-hand to engrave those knives.

Once you’ve eaten all you can and picked up a knife (they make great holiday gifts!), it’s time to sit back and enjoy more cocktails with your friends and watch all the sumo wrestling. Until they kick you out. A ticket to the 17th round of Sumo Stew is $55 with a portion of the proceeds being donated to the Japan Society. Each participant is guaranteed a bento box, bowl of chankonabe, beer token, and two drink tickets to be used for a taste of sake, shochu or whisky.