Adventures on the Ramen Railroad—Ramen Popup at Budin

The Greenpoint restaurant scene offers a wealth of wonderfully diverse and exciting dining options, but for some reason, finding a soul-warming bowl of ramen has remained elusive. While the American ramen obsession has often been credited to chef David Chang and the bowls he started serving at Momofuku Noodle Bar, Japan has been riding a rollercoaster of emotion over ramen since it was brought to them by Chinese tradesmen in the nineteenth century.  Over the last few decades, Japan has created museums to ramen, ramen-themed video games and has even established ramen dating services to pair you with a partner who shares your passion for the dish.

Greenpoint is long overdue for its ramen moment.

While many would lament this culinary gap and continue to accept their fate of having to venture further afield for their broth, Greenpoint resident Daniel Birnbaum decided to take matters into his own hands. His passion for the hearty warming soup has lead him on a nourishing adventure which ultimately meant changing career paths in order to bring ramen to the neighborhood.

“I was working in retail leasing as a commercial broker and I thought it would be a fun project to try to bring a ramen shop into the neighborhood. I loved living here and I loved ramen and I saw a need for it. I found myself traveling to the West Village all the time and so from a selfish point of view, I wanted to have the convenience of walking a couple of blocks away for ramen. So that was a project I worked on. I made some set ups, I found some retail space and I was really excited about it.”

When that avenue didn’t lead where he hoped, undeterred, Birnbaum decided to try to partner with established ramen chefs. “They all wanted huge salaries and it would have been a massive investment. I just wasn’t sure if it was sustainable.  So, I thought, alright, I’m going to learn how to make ramen myself.” 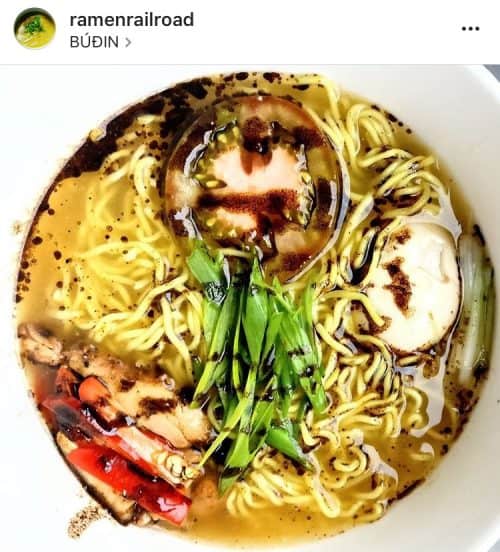 The decision to change course and venture into the food industry didn’t come entirely out of left field. Birnbaum grew up around the business; he has a cousin who works for Mario Batali and his grandfather ran a catering hall. He also spent a year as a line cook in Los Angeles so he had established some solid instincts when it came to creating new recipes. “I knew what I liked in terms of the flavors of ramen and then six months ago I started getting more serious about coming up with recipes. I did a lot of research online and I talked with a lot of the chefs that originally I had been hoping to partner with. They introduced me to new ingredients and I started making it at home. I was seeking out all of these weird things that I’d never dreamt of using, like chicken feet.”

If you’re wondering how a Greenpoint resident managed to source chicken feet nearby, it turned out to be surprisingly easy. “The funny thing is that C-Town on Manhattan Avenue sells chicken feet. They are the only supermarket that sells them and they’re right around the corner from where I live. I went in and they had a couple of packs. It was pretty convenient and I took it as a sign.”

Initially Birnbaum started what is now Ramen Railroad as an outlet for hosting ramen parties in his apartment. “It was mainly just friends coming over and we’d have dinner parties and that was it.” However, he knew he was ready to take things to a wider audience when an unlikely source gave him some encouragement. “I was getting positive feedback, but I think I knew that I was really ready when my ex-girlfriend came to pick some stuff up. I was making some ramen and she tried some and said, ‘Do it. This is it. You don’t have to experiment any more. Just do it’.”

Not long after, Birnbaum fortuitously met Budin’s owner Crystal Pei. “I asked if they were interested in doing ramen and they said that that would be awesome.”

Pei adds, “Greenpoint is such a neighborhoody place and we love doing pop ups and we like to have diversity. We have the Grilled Cheese pop up and last winter we had Kenny (Monroe) and Emma (Gonzalez) from North Brooklyn Farms here through their off-season, so we really like to have a variety of food pop ups.”

The neighborhood response to the Ramen Railroad pop up at Budin (114 Greenpoint Ave) has already been incredibly positive. “Everyone’s been really supportive and excited. I feel really lucky and blessed to be here. The people working here are really cool and the people coming in are awesome. For the foreseeable future, Budin is a great partnership.” 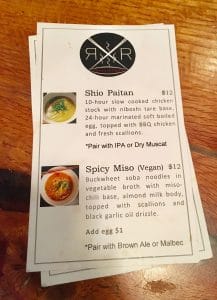 The Ramen Railroad pop up currently features two ramen options. Birnbaum explains, “At first, I just started out with the shio paitan which is a slow-cooked chicken-based stock with a fish flavoring. I figured it was the perfect balance between something hearty, but also maybe a little cleaner so that it doesn’t leave you feeling like a train just hit you. Of course this being Greenpoint, when I started making that here at Budin, people were asking whether I had anything vegan or vegetarian, so I thought I’m going to have to appease the vegans!” he laughs. “So I came out with a spicy miso vegan dish and I actually love eating it now. I’ve also been thinking about doing a pumpkin-based miso around Halloween.”

There has been an ongoing debate online as to the various ways to eat ramen and whether loudly slurping up your meal is viewed as complimentary to the chef. At Budin, you’re supplied with a wooden ladle and chopsticks and slurping is welcomed. “The most satisfying thing for me other than hearing people slurp their ramen, if that’s what they’re doing, is seeing an empty bowl. Someone told me once that you’re not supposed to finish the broth and that it’s rude to do so, but I’ve never heard that so I’m finishing my broth!”

Ramen Railroad is popping up at Budin (114 Greenpoint Ave). Go slurp your bowl as a sign of appreciation for Daniel’s service to ramen on Mondays, Wednesdays and Thursdays for lunch and dinner between 12pm-10pm. The ramen menu comes with suggested wine or beer pairings and Budin offers a dollar off draft beer and wine with any ramen purchase.