“It’s interesting,” he says, “to see artists respond when you put limitations on them.” The limitations are familiar to anyone who attends shows or is a musician in New York. They come down to two things: noise and space. “It’s almost always worked out. One or two cases, maybe.” One aspect that keeps things going is a good relationship with the neighbors. “They all have my number. They’re great. Sometimes I get a text saying, ‘hey, last night was a little loud,’ but for the most part, the relationship is really good.” Another is just figuring out who could and should play. Who does the approaching? “It’s pretty much word of mouth, musicians putting me in touch with other musicians,” he says.

YouTube plays a role. With music production what it is—available at the click of a button—it’s important to see how a performer or group of performers comes off in person. Then there’s the question of payment. It comes up. “Some people ask for a guarantee. I have to tell them, the bar has to make money first. Once it gets past a certain amount, they get a percentage.” Because there’s no cover charged at the door, this is more than fair, and usually the artist gets something.

So at what point did Troost move towards music? Was there anything or anyone specific?

Speaking of the question of origins, where is John from? “Los Angeles. But I’m not an Angelino anymore,” he says. “I still go back.” He’s lived in New York since 1997, and moved straight to Williamsburg, at a time when the neighborhood – well, desert, would be a generous word for it.

Ghosts of music venues past garner mention— Tonic, The Cooler, Tramps, Brownies. 9C in the East Village, North 6th, on, well, North 6th. There was no shortage of places to see some fairly tumultuous stuff. “It’s starting to come back,” he says. Were there any other venues he had in mind? “There was a place called Louis’s in the East Village, a jazz bar that never charged a cover. Then there was a place in London called the Wag Club, which did lunch time shows—imagine that. I never went to it (it closed in the early 80’s) but I was always kind of fascinated by the idea of it.”

And plans for the future? “We’re in a good place with the lease,” he says, “but it won’t last forever. So, the hope is a second place or something will happen down the line. We’ll see.” Before the evening wraps up, I’m curious if there is a way, something secret to keeping anything open in New York, particularly in Greenpoint, since one avenue away, on Franklin, rents went up by an average of 42% last year, the highest in the city. There’s no one ingredient, it turns out, but the words “living sculpture” come up. After contractors built the space up to code, John and his business partner did the rest of the layout, design and construction. “I did some carpentry on the side, and kept that up for about a year while business picked up. But we did the design, and still make some adjustments. We tweak it. For the most part, it looks the same as it did, but there are a few changes. You watch people while they’re here, see how they respond to things. See how the space is used, and if any part of it could be used better.”

Troost is the tale of an owner keeping a stake in their own game. And it’s a good one. 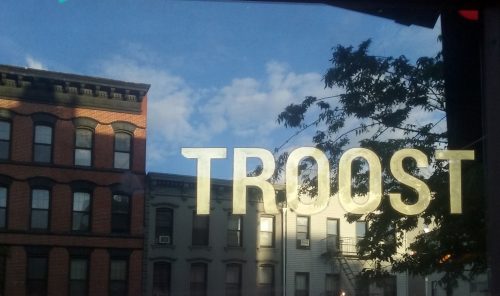