Amami, Greenpoint’s Own Izakaya With a Sushi Brunch Bonus

Sauvage isn’t the only new restaurant to pop up at the great Bedford-Nassau-Lorimer-Berry-McCarren exchange. Amami (57 Nassau Ave) opened its doors in late July bringing us sushi, sashimi, and most important now as cold and flu season beckons, bowls of steaming hot ramen. But one look at the space—which formerly housed Mexican restaurant Sindicato de Cocineros—and you can tell this isn’t your regular sushi joint. Yes, there are the “regular” sushi dishes we’ve come to know and love, but underneath the beautiful floating terrariums, are dishes made from seafood fresh enough to be on higher-caliber (read: $200/person) omakase menus, alongside little touches like house-fermented soy sauce and freshly grated ginger. And then there’s the real kicker: sushi brunch. 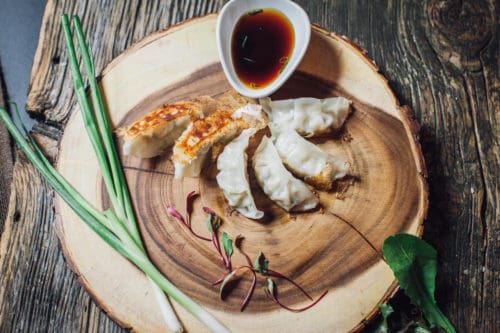 Amami is actually the second neighborhood restaurant for Chef Nick Wang; he also owns and runs Ako Sushi up on Bedford Avenue in Williamsburg. Chef Wang immigrated to America in 1993, and worked his way up in the restaurant world after starting as a delivery boy. The focus at Amami leans towards an izakaya with a whole section of the menu dedicated to small bites like pork buns, negimaki (teriyaki-marinated beef), and ika maruyaki (grilled squid). 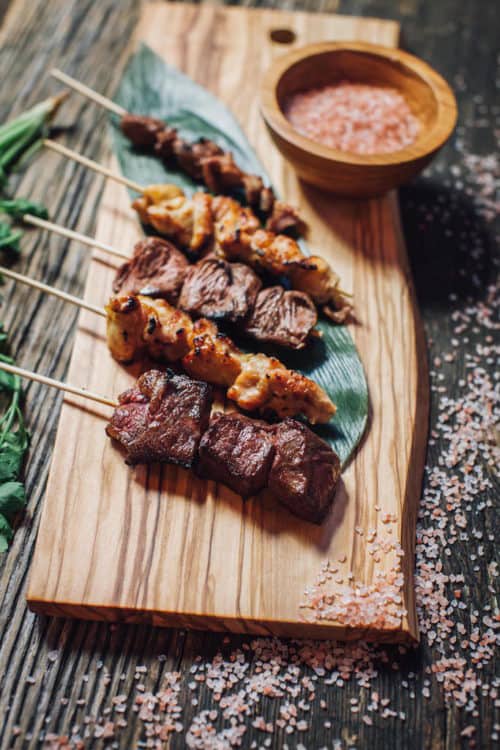 There are also various skewered yakitori options including popular chicken gizzards and chicken hearts. Though the ramen options are limited—there are only five at the moment with one being vegetarian—they help the dearth of ramen we have in Greenpoint. Going with the Japanese gastro-pub theme, Amami’s drinks menu is a near-perfect match for its plates. One has to be very careful with booze and traditional Asian dishes as a misstep can quickly cause off-flavors that can ruin a whole meal. I’ve especially loved the details that have gone into their cocktails, all of which have played well with my given night’s choices. 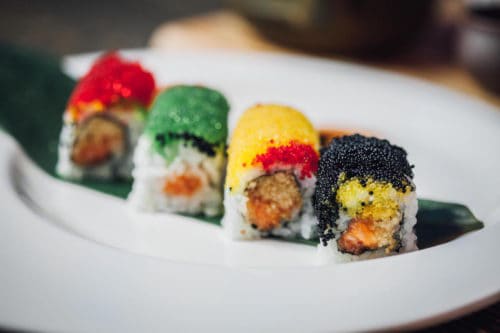 But chances are when you’re going to Amami, you’re going for a sushi/sashimi dinner, and that is where the menu excels. There’s otoro (fatty tuna), hamachi (yellowtail), kampachi (amberjack), and uni for the sashimi connoisseurs, but everyone will want to get something from the signature roll menu. Almost every roll there has some special twist whether it’s being topped with jewel-toned caviar or slivers of toro, or brought to you with a sauce not usually found in sushi houses (creamy mango sauce, spicy cherry aioli, and bbq sauce all make appearances). Exploring this side of the menu is a great way to see how a chef can incorporate little touches of Western cuisine into traditional Japanese flavors. Plus, everyone likes to feel special with a little caviar every now and then.

Then there’s brunch. The less adventurous or more breakfast-inclined should go with the azuki (red mung bean) waffle or okonomiyaki (Japanese-style pancake). Those needing something a bit heavier can turn to katsu don (panko-breaded and fried pork cutlet), a curry rice bowl, or vegetable kakiage (lightly battered vegetables). There are also bento boxes and a weekend sushi special. With everything $15 or less, this is quite the neighborhood brunch steal and a great spot for those seeking out a different weekend lunch spot.