All Aboard: Greenpoint’s OG Pirate Dr. Klaw is BACK

If you’ve lived in Greenpoint long enough, you’ve probably heard tale of Dr. Klaw. Six years ago, Dr. Klaw was illegally slinging seafood out of an apartment in Greenpoint. You texted Klaw, and he texted you a location—sometimes a street corner, sometimes behind Peter Pan Donuts—where you could swap cash for his addictive homemade lobster rolls.

Before too long, Dr. Klaw got popular with locals and celebrities alike. He won’t reveal who his most famous customers were, but there were some big names jonesing for his lobs, and at max production he was trafficking up to 250 lobster rolls a day, had up to $30k worth of lobster in his refrigerators, and a lot of illegal propane tanks. And he even had an imitator invading his turf, who dealt grilled cheese sandwiches in the East Village. “We had words,” Klaw says.

After admitting the lobster roll was the best he’d ever had, the local fire chief warned Klaw, “Do me a favor. Just get a real fuckin’ job.” But even after greasing the palms of a couple fire inspectors with buttery lobster rolls, he got threatened with jail time and shut down by the health department— the Underground Lobster Pound was dead in the water.

Dr. Klaw happens to be tight with Ben Sargent (though we can’t officially confirm whether Dr. Klaw IS actually Ben Sargent), who ended up becoming somewhat of a celebrity and getting a show on the Cooking Channel after the whole affair. But doing the show and the health department shutdown meant that Dr. Klaw had to go back into hiding. A network exec told Ben, “You work for us now. There’s no more Dr. Klaw.” And he was gutted.

But now, thanks to a Kickstarter project and a motorcycle fashioned into a lobster, Ben is tracking down Dr. Klaw once again, and you can follow his seaworthy adventures to secret locations while grubbing on fresh catch along the way. 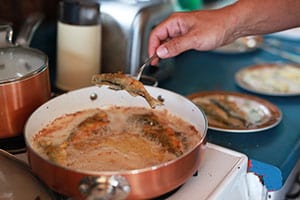 We caught up with Dr. Klaw at an undisclosed marina that required locks, key retrievals, passwords and secret door knocking combinations just to enter. As soon as we arrived, he had some baby bluefish he had caught earlier that morning ready to fry in the pan. It’s difficult to discern the cut of Klaw’s jib—he dons sunglasses and a bandana concealing his face, a captain’s hat with a gold lobster on it and a giant gold claw on a thick chain around his neck. He swears like a sailor, and his voice is a growl (sort of like Dr. Claw from the Inspector Gadget cartoons), but he’s anything but menacing. Despite the hard-to-crack thuggish exterior, if he’s invited you into his lair you’re IN his club. And by backing his Kickstarter you’ll become a part of a curated group of fresh catch loving keyholders. Klaw is a warm and inviting host ensuring everyone has a great time, which always means a little booze and bamboozling.

After eating the bluefish and drinking Mike’s Hard Lemonade, Klaw invited us for a spin on his motorboat. He showed us the half-sunken pirate ship where he hosted a private sushi dinner for a small crew, only accessible by boat. And he’s also an urban angler, so he cast a few lines while we were out. “[Fishing is] just like gambling,” he says, “I see that look in people’s eyes and they get crazy about it. If the fish are biting you know they’re out there.”

His favorite New York catches are fluke, bluefish, flounder, porgi, weakfish, albacore and striped bass. “Fishing in the East River is the most exciting form of fishing I’ve ever done,” Klaw says, and you can tell even through the bandana and sunglasses that fishing intoxicates him. He and his friends used to go down to the Greenpoint waterfront and cut fences down to access the best fishing spots. “There’s something about catching a fish with a view of Manhattan…,” he trails off, and for a moment Dr. Klaw gets emotional. His heart drifts at a rhythm in sync with the tides, and he reveals that he’s a lonely pirate, forever setting sail to search for his mermaid.

You should back Ben’s Kickstarter to stay in the loop on secret intimate events—and if you’re lucky the illusive Dr. Klaw might make an appearance too.