The Village Voice’s Fifth Annual Brooklyn Pour Craft Beer Festival last weekend filled the Brooklyn Expo Center with over 60 breweries and their fans. Amid a melee of Frisbee, games, balloons, food trucks and tables, there was still room for all the attendees to drink, mingle and even compete in a stein lifting competition. 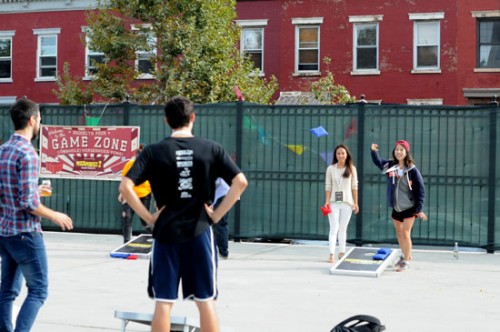 Brewers came from near — from Albany, from Long Island, and from our very own fine borough of Brooklyn — as well as from Vermont, Virginia and San Francisco. They came hauling kegs and cans of beer in every flavor, color and strength.

Misty Hackworth, brand manager for Williamsburg’s Brooklyn Brewery, was glad that the Pour had chosen the Brooklyn Expo Center.

“It’s great to have the event here because it’s not a giant convention, like Denver,” Hackworth said. 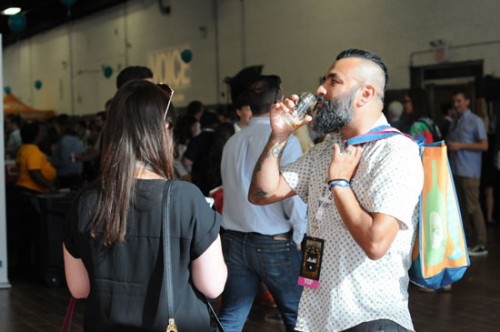 Attendees were pleased with the mix of large breweries and small breweries.

“I was pleasantly surprised to see a lot of breweries I know are here with beers I didn’t know they have,” Andrew Morinelli, who lives on the Upper East Side, said. 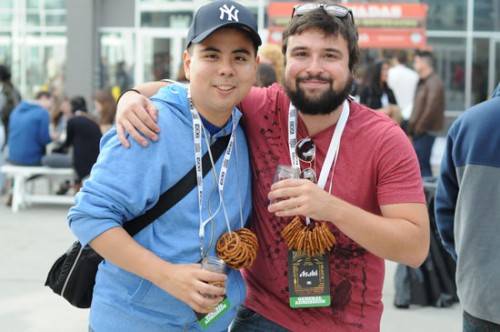 “We’ve been around for 27 years, and we’ve been able to find a way to fulfill every market,” Misty Hackworth, brand manager at Brooklyn Brewery, said. “Our special beers are a big hit, including the BQE series, usually 750 milliliter bottles, and the BMR, the Brewmaster Reserve series.”

Another Brooklyn favorite, Coney Island Brewery, represented with a candy-like hard root beer. With Madagascar vanilla, birch and licorice, it was dangerously easy to drink. 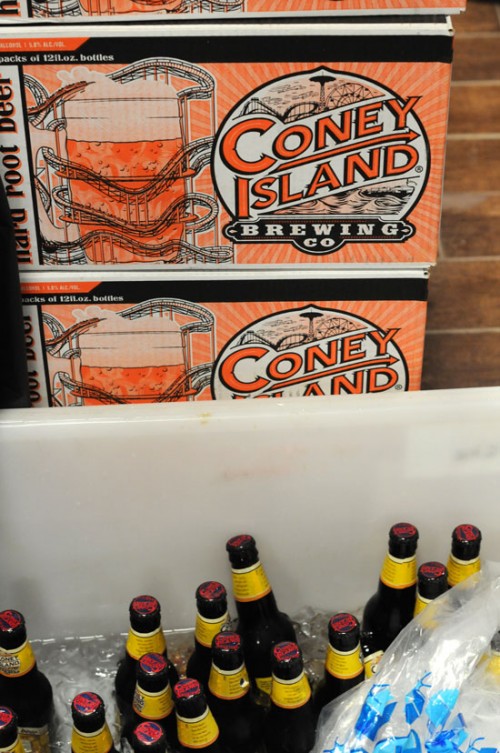 “It’s delicious straight up,” Zach Weissman of Coney Island Brewery said. “But we definitely recommend it as a root beer float too.”

“We do beer true to style,” sales manager Mike Descarfino said about his brewery. “We do it our way and we don’t conform to anyone.” 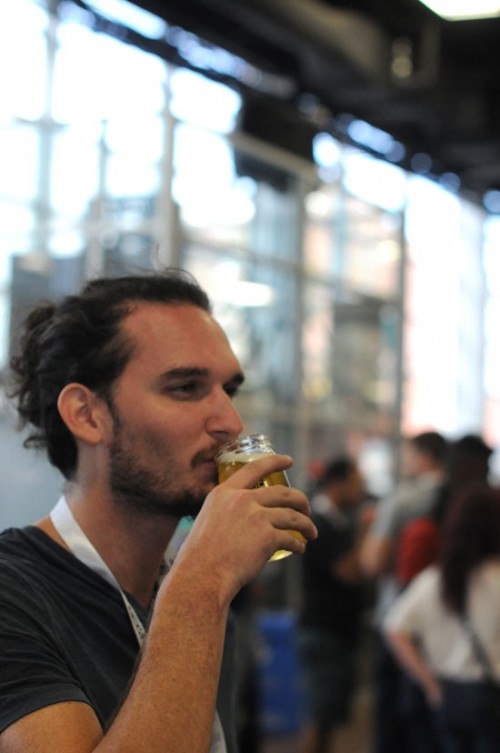 Speaking of conforming, pumpkin beverages made their presence known at the event.

And that’s not even counting the other fall brews at the fest. Cranberry ales, Oktoberfests, pear ciders, and spiced orange ginger beer from Crabbie’s rounded out an incredible seasonal lot. 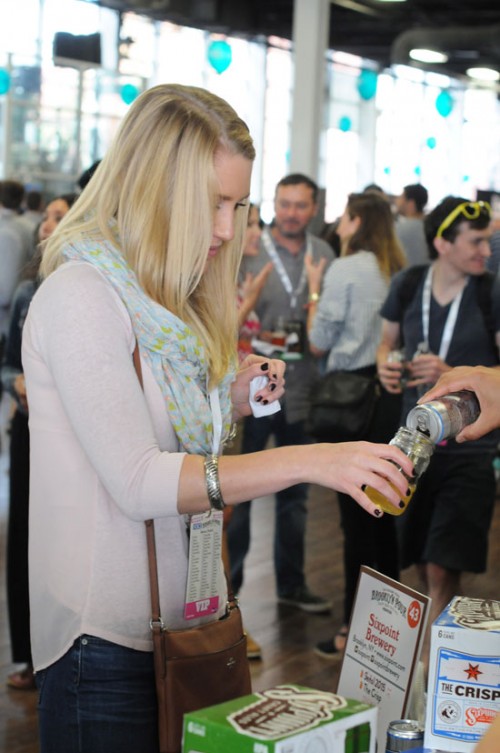 When asked about other trends, beer reps had two things to say: cans, and sour beers.

“We just started our cans, and they retain flavor, protect against light and are more environmental,” Speakeasy Ales & Lagers representative Enrique Blandino-Ripley said.

“Sour beers are all the rage,” Hackworth said. “And also beer in a can.” 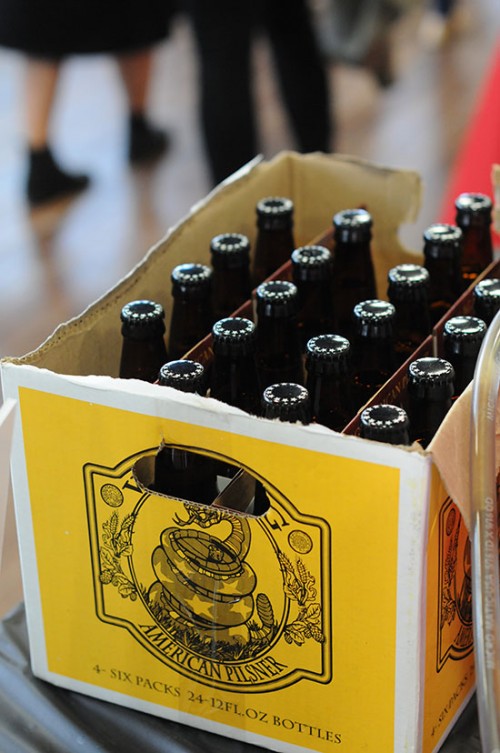 Erica and Greg Besso of Hell’s Kitchen found out about the Pour at the last minute, and really enjoyed the event as a couple.

“He’s gotten me to love beer more,” Erica, an IPA lover, said of her partner Greg, a porter and stout fan and owner of BodoBeers.com, a Yelp for beer. “Beer is more casual, so beer places have more of a fun atmosphere.”

“We love the venue,” Greg said. “It’s all on one floor, and I love the outdoor space. Every year it’s getting better. The quality and creativity are going up every year. I appreciate the hard work and want to support the New York breweries.” 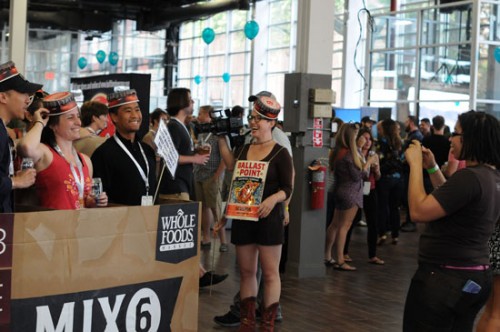 “I was brought here for my birthday,” attendee Eugene Choi, who came from Bay Ridge, said. “I love all the beers, but the Traveler Grapefruit Ale was my favorite. I like IPAs and strong, hoppy beers, and I’m always looking for a good craft beer.” 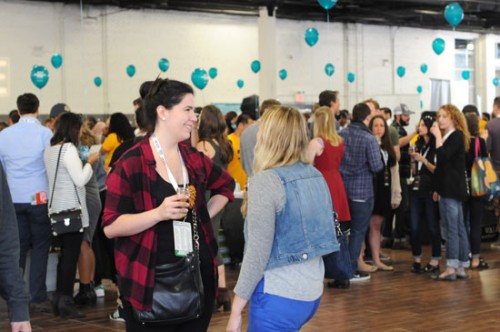 A liquor booth by Jameson and coffee shandies by Grady’s Cold Brew provided an after-beer digestif.

Happily tipsy attendees checked off the breweries they had visited on their nametags and made sure they’d obtained all their Brooklyn Pour Bingo items, from their tasting glass to beer koozies, pretzel necklaces, photo booth photos and fake mustaches. As the day progressed, favorites were tapped and certain beers were no longer available, but there was still plenty for attendees to drink.

Blandino-Ripley of San Francisco’s Speakeasy was impressed by the level of knowledge in the attendees.

“The beauty of this market is that Brooklyn knows what it wants,” Blandino-Ripley said. “We’re growing exponentially and interacting with people here is something we really want to do.”