Since opening in August, Greenpoint Fish & Lobster Co. (114 Nassau Ave.) has become one of the biggest local success stories of 2014. With a fish market counter at the front, and an eat-in bar at the back, it’s their focus on sustainably sourced, simply prepared seafood that keeps customers coming back for more. I live on the same block as the restaurant and it’s always packed whenever I pass by.

Owners Vinny Milburn and Adam Geringer-Dunn receive a new supply of ocean-fresh seafood each day and the menu changes depending on what they  get in. Their collaborative group of talented chefs use simple, delicious ingredients to create dishes where the fish is always the star. There’s no freezer on site, which means that when an ingredient’s out, it’s out. “We’d rather be selling out of fish than wasting what’s leftover” says Vinny whose, family has been in the fish trade in Boston for five generations. As a result of his well-connected heritage, he gets first dibs on the best hauls in the area, meaning that there’s usually something spectacular on ice in the window or at the raw bar.

Given the popularity of Greenpoint Fish and Lobster Co., the good news is that they recently extended their opening hours from noon-10pm (11pm on weekends). Along with these new hours they have introduced a weekday lunch special where $20 gets you half dozen oysters, a 16oz Narragansett, and a choice of baja fish tacos, fish chowder, or kelp noodle pad thai. $20 for a weekday lunch may sound decadent, but when you consider that six of their gorgeous oysters alone would set you back at least $15, this starts to sound like a pretty good deal.

They have also started serving weekend brunch from 12PM-4PM. Again, the menu changes slightly depending on daily fish varieties, but everything on offer when we visited last weekend sounded amazing. This is what we had: 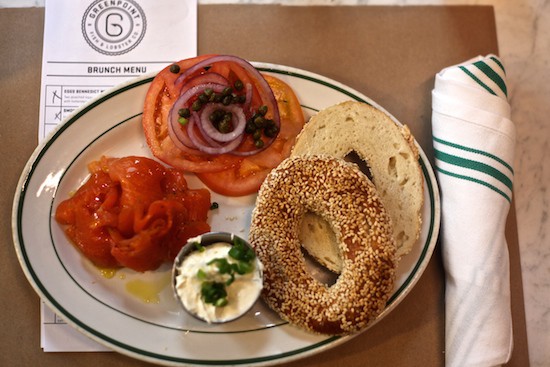 Until trying this I really believed that the much hyped Black Seed bagels would have black seeds on top. They don’t, but they are delicious. Very slightly crisp on the outside and soft, dense and chewy on the inside, they are a real treat with all of the accompanying ingredients heaped on top. 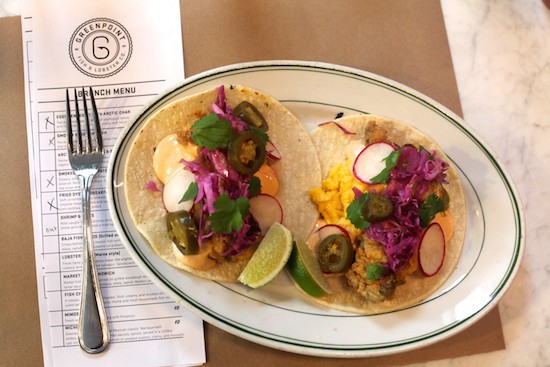 Stop.  These tacos are too good (even at breakfast which wouldn’t normally be my taco hour of choice). Perfectly fluffy scrambled egg, oysters in a crisp batter, a lovely crunch from the red cabbage, and extra flavor from the the chipotle mayo and jalapeños. 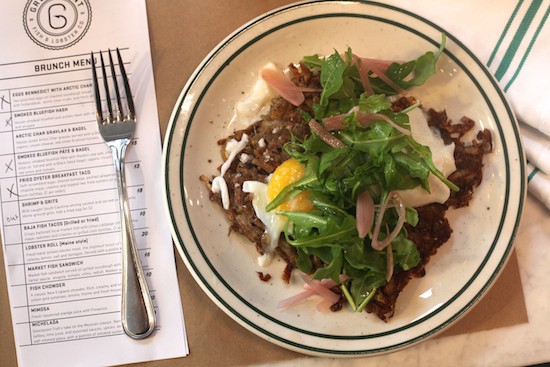 Vinny’s dish of choice. The presentation is rough and ready (c’mon, it’s a hash, how else could it look) but the taste is sublime, and anything with an egg on top gets points from me. A great comfort dish to ease a hangover or the drear of a cold day. 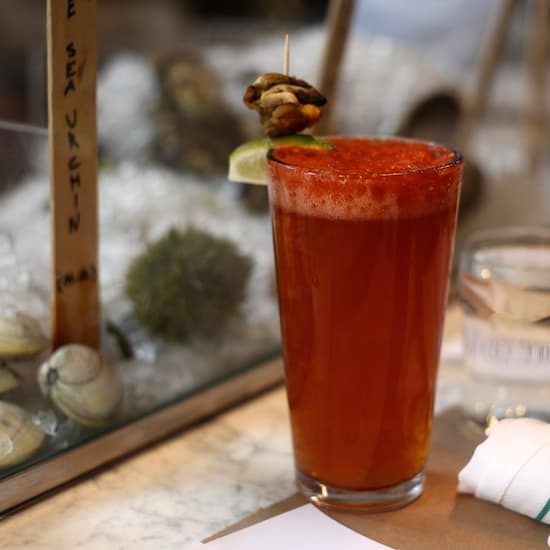 Michelada with a garnish of smoked oysters, clams and mussels.

This giant michelada comes accompanied by the remaining half of its Narragansett 16oz tallboy, which meant, with a few of these little top-ups, it lasted me all through brunch. The addition of clam juice is lovely touch and it’s not overtly spicy which is a relief. If beer’s not your thing they also offer mimosas and, as of this week, there is also a Chilean Sauvignon Blanc on tap.

Also on the brunch menu are dishes such as shrimp and grits, Maine lobster rolls, and eggs benedict with arctic char, and with so much good food on offer it’s little surprise that they’ve been ranked among Thrillist’s top 11 new restaurants of the year. (For those interested to know more about this list, there is a ticketed event in Williamsburg on December 6th to sample dishes from some of their favorites and sip unlimited Grey Goose vodka cocktails.)

Greenpoint Fish & Lobster has also been shortlisted by the Time Out ‘Love New York’ awards for best restaurant in the Williamsburg/Greenpoint area. Voting has now closed and winners are announced soon, but in the meantime why not go and judge for yourself. By following their instagram you can keep regular tabs on their catch of the day, so when you see your favorite fish come on the menu you’ll know to get there early and beat the crowds.

Greenpoint Fish & Lobster Co. is at 116 Nassau Avenue (at the corner of Eckford Street).
They are open noon-10pm daily (and 11pm at weekends).