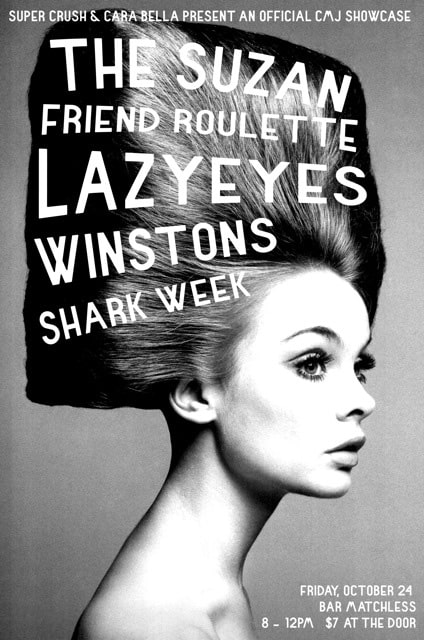 It’s Friday! Why not kick off your weekend with some great music and good people? Come on down to Matchless tonight at 8:00 for our CMJ Showcase, which we present along with Carabella and Supercrush Studios. For just $7, you can see five great bands and three DJ sets. That’s not even a dollar an act. You’re losing money NOT coming. But you know what? Forget about that money. It’s about the experience, which will be great. All of these musicians will come to play. The atmosphere will be intimate and fun.

The night kicks off at 8:00. You can see the actual order of performances in the poster above, from last to first, top to bottom. (So the Suzan finishes and Shark Week starts), but I thought it would be more fun to go through the bill here in alphabetical order. So first we have Friend Roulette, a coed six piece band. Their music has an otherworldly vibe, at times pop, and others almost classical, but in an experimental way. To me it’s like film scores of the feelings in your head. It’s broad and personal. Check out their recent tune “I Guess.”

Next is Lazyeyes. I remember hearing their song “Wait” from their self-titled EP last year and really digging it. This trio of Brooklyn dudes has a way with guitar tone – not to slight the other musical contributions. That’s just what I hear first. If “Wait” was a bit more ethereal, their latest track “Adaptation” pulses with fuzz and energy. Just what you want for a killer live set.

Shark Week played this very showcase last year, so while I know all the other bands will be awesome, I have actually SEEN Shark Week be awesome. The only band coming from out of town (DC), they have a sound steeped in vintage West Coast surf blues and hit the sweet spot between elegant harmonies and raucous garage. Trust me, you want to be there right when this starts so you can catch them. Here’s “Go West.”

Jumping from first to last, we have The Suzan – a group of ladies originally from Japan, but who are based here in NYC now. They will certainly close the night in style. Their sound is upbeat and fun, brimming with punk thrills and utter catchiness. Seriously, just try getting “Home” out of your head after you watch the video – which should you give you a sense of their live show. Maybe it won’t be as kaleidoscopic, but it should be just as colorful.

Finally we have Winstons, who just might be the youngest band on the bill. I’m talking in terms of their history as a band. Facebook says they formed in January 2014. Listening to a song like “Still Cry For What I Did,” you don’t get the sense they will be green. It feels like their blues rock is imbued in their very souls. I am always impressed by a duo that plays bigger than their size would imply, and the Winstons have a huge sound. The drums crash, the guitar is heavy as hell, and the vocals are bringing all kinds of emotion.

Besides these bands, we’ll have DJ T*O*N*Y*, Dead_Beat_Dad, and Spiritual Abuse spinning. Once again, it’s at Matchless, starting at 8:00, and you can RSVP via Facebook here. Hope to see you tonight! And be sure to check out plenty of other great music this weekend at CMJ, there is lots happening in the neighborhood.