(A version of this interview appeared for boygirl Magazine)

Late in his life, Henri Matisse would turn to creating cutouts, which eventually covered the walls of his lofty studios from floor to ceiling inside the Hotel Excelsior Regina Palace at Cimiez in France. Matisse would direct his numerous assistants and his Russian mistress, Lydia Delektorskaya, with a 12-foot long bamboo cane from his bed, and they would all rush to adjust his colored paper compositions. Echoing Matisse in his own way, and paying homage to the beauty of industrial America, multimedia artist Michael Hambouz has created a series of 18 large-scale, cut-paper collage works called Factory Made using paper stock from the mill located in his hometown of Niles, Michigan. We met in front of The Richardson, and walked to his studio a few doors down, where his cat, Pickles, was waiting. 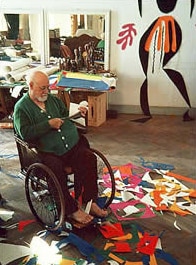 Michael Hambouz just moved into the two story space where he lives and works, but the living room and kitchen are already set up in such a way that he could have been there for years: artwork lining most of the available wall space (that’s almost all trades for friends’ work, he says); a nice, comfy leather sofa; and a sense of home that some people pay to develop. There was a big table right next to the next kitchen, covered with colored paper cutouts and blown up pictures of the insides of the French Paper Company mill that Hambouz has made the focus of his latest efforts.

The Frenches have been manufacturing quality paper in Niles for over 140 years, and the business is in its sixth generation of being family operated by a French. These days, it stands as something of a relic of America’s proud, industrial past, before “outsourcing” and “tech bubble” were part of the casual vernacular. And, Hambouz fits the picture of the American Dream child: a descendant of Flint, Michigan autoworkers on his mother’s side, and his father was a Palestinian refugee. He grew up playing football and skateboarding around Niles, although, he says, “Nobody really talked about what they did inside the paper factory. It wasn’t until I left to go to college…I went to Antioch in Ohio…that I met these graphic designers and print makers who were obsessed with this paper.”

So, we dive right into the questions:

MH: It’s kind of a quintessential, mid-western, Norman Rockwell-ian small town. I think there were around 30,000 people there when I was growing up. It was very industry heavy, and most of that has collapsed since then. And, this paper mill that I’ve been working with is really only one of the few major manufacturers left.

MH: I did. In retrospect, I appreciate the fact that I got to grow up having the wilderness around. We had a central downtown area surrounded by farmland and forests, so I grew up fishing and hanging out in the woods, riding dirt bikes, doing things that a lot of city kids couldn’t do, and worked in landscaping for a lot of high school. I like having been raised with the fundamentals of small town living, and now being in the city and feeling like I have a well-rounded ability to be comfortable and adapt in all surroundings, while genuinely friendly.

GPers: When did you move to New York then?

MH: Right out of undergrad, I spent a year as a substitute teacher at my old high school, which was a crazy experience, and used that money to move to New York.

GPers: What subjects did you teach?

MH: Every single subject that they called me at 5AM requesting me to teach…except for art. I even taught Robotics twice, and did a really terrible job. A lot of the substitute teachers that I had had in school were still there, and were baffled by why I was there…it was not the right fit. So by the time I moved to New York, it was two weeks before my 23rd birthday.

GPers: Where were you living?

MH: I lived in Gowanus, on 4th Avenue from 2000 to 2004, and that building burned down. There was an electrical fire caused by the landlord. So, that forced me to move out of a $350-a-month apartment.

GPers: That rent was a sweet deal.

MH: Yeah, it was pretty normal. It was not that long ago, but that was rent then.  And, I moved to Greenpoint early 2005, and there has been no turning back.

GPers: So you’ve seen it go through some changes?

MH: Oh, yeah absolutely. I’ve had a band rehearsal space at Greenpoint and Franklin since 2004. Pencil Factory was at the corner, and that’s about all that I remember. There were none of the clothing stores, no record stores. It was pretty desolate…but luckily I love records, and clothes are a necessity to avoid indecent exposure tickets.

GPers: When you first moved to Greenpoint, were you doing art?

MH: I came to New York with so much student loan debt that the concept of being a starving artist was too overwhelming to me. I grew up without much money, and I didn’t want to extend my seemingly perpetual brokeness here, of all tough places to survive. So I sadly abandoned working on art for the most part for almost a decade. I spent my first summer here doing rooftop landscaping and a lot of penthouse high-end installations, and lugging trees up ten flights of stairs—very interesting way to get introduced to this city.

MH: I moved here blindly, without an apartment or a job. I just knew that this is where I needed to be, and I took what I could do right away. I realized that I needed to at least be working to support the arts if I wasn’t making art—which led me to five years at BAM in five different fundraising roles. Then I saw a position open up for Director of Special Events at Pratt, and I went for it. I worked at Pratt for five and half years, raising scholarship funds for students via gala benefits, and producing lectures series and commencement at Radio City Music Hall.

GPers: Then at night you’d be doing your own artwork?

MH: No, I worked pretty solid 10 to 12 hour days that whole time—the non-profit fundraising world is no joke and serious work. Honestly, it was really, really difficult for me, when I had any free time at all, I just couldn’t isolate myself in a room by myself making art. I was either exhausted, or I just needed to have social interaction. So instead of making fine art, I was playing in bands as a means to be creative and social.

GPers: What do you play?

MH: I’ve been playing guitar in Greenpoint-based band Cobretti for 13 years now. We’re  named after Sylvester Stallone’s character in Cobra. And have played bass and drums in various other side-project bands.

GPers: So what kind of kicked you into doing art one day?

MH: My grandmother passed away during my last year working at Pratt. I had put off three different visits to hang out with her because of work. She was 95. I felt terrible about it. I had guilt-tripped myself out of doing normal things because my job always came first.

I just wanted to do a great job, and in order to do a great job, I felt like I had to put in a ridiculous amount of hours and never go anywhere. I never traveled. And that was the push that was like, “I’m doing things wrong. Not only am I not following my passions directly, but I’m also not even taking care of the people that I care about.” At that point, I already knew that I had learned all that I possibly could with that position, so I created a strategically smooth plan to transition out on the heels of producing two big fundraising benefits for Pratt. I saved up enough money to at least make a break for six months, to pursue art full time and it’s been 3 years now. I’m going to knock on wood.

[knocks on the floor]

Hear that? I’ve been selling work, getting freelance commercial art jobs, and doing freelance fundraising consulting for arts non-profits on the side, and somehow keeping all those juggling balls in the air to get the bills paid and sustain happiness.

GPers: Before your latest series, you were previously using acrylic and then on this project you switched mediums completely?

MH: When my mother passed away unexpectedly at the end of 2012, I spent a lot of time traveling back and forth to my hometown…it was extremely tough for me…my creative streak came to a halt. With the passing of my mom, and essentially that last remaining anchor to my geographical roots, I ordered a bunch of paper samples from French as a means to reconnect with the area. I tried to start painting with it, but it did not work the way I’m used to painting. It just did not hold paint…but I had so much of it! I randomly started cutting it one day as a means to fulfill a promised art trade with pal and Greenpointers’ very own illustrator and French Paper fanatic, Libby VanderPloeg, which was something I had never done before, and it was a lot of fun—it felt right. I was learning all this new process and medium. The sample packs that I got were all different stocks, thicknesses, and weights, and they cut differently. I had to figure out how to treat each kind of paper differently.

MH: I also asked my high school friend Troy at the mill if he wouldn’t mind doing a little recon photo mission for me, like a day-to-day about how the paper’s made, and what it looks like from his perspective as the floor manager there. He sent me these really incredible pictures, which I went into, cropping and isolating compositions that I really liked that had beautiful harmony of shapes, perspective, and lines. I replicated those in the paper that they make, reinterpreting the shapes and colors of reality with their palate of super-candy-colored, beautiful, vibrant papers. And the results are beautiful–I’m very happy with this series. It’s tricky to see, too, online, but they’re quite big, with lots of layers, depth and dimension.

GPers: You just moved, but are still in Greenpoint after all these years. What’s one of the things you like about living here?

MH: Greenpoint has such a supportive network of friendly, good-hearted artists. I think it’s a little difficult these days to find a community of artists that’s not super cut-throat and ultra competitive that actually want to help support and collaborate with each other. †

Multimedia artist Michael Hambouz‘s exhibition Factory Made is on view now from September 10 to November 21, 2014 at Lobby Gallery on 1133 Avenue of The Americas (between 43rd and 44th Streets). There’s an RSVP required, so please e-mail [email protected] to confirm your attendance. You can follow Michael Hambouz on Twitter and IG (@mhambouz).