We Invented a New Subway Line: Over the New Kosciuszko Bridge (and Beyond)

Visting the Kosciszko Bridge, on Earth Day, no less, got us thinking: was there ever any consideration for a mass transit line on the major project about to replace the structure, and perhaps to extend it even farther along the BQE?

When we came up with nothing, we created our own dream subway line. And we’re calling it the K Train.

As you can see (above), Eastern Greenpoint and Maspeth would see immediate transportation benefits, and the ramifications could positively impact many more commuters.  Expansion of the line could finally provide direct rail service to La Guardia Airport. The K Line could also serve areas like the Brookyln Navy Yard, Wallabout, and Red Hook, while also connecting neighborhoods that currently require a trip into Manhattan, allowing commuters to coast down the Brooklyn waterfront, something that as of now, we can only do to a very limited extent, by ferry.

We decided to ask some experts if this idea was ever considered.

“Definitely seems like a missed opportunity,” Alan G. Brake, Executive Editor of The Architect’s Newspaper, told us over Twitter.

“I think we started out very big at the very beginning of the process, as in no suggestion was too expensive or big to start off with,” said Teresa Toro, a Greenpoint resident who was part of the Kosciusko Bridge Stakeholders Advisory Committee. “But I honestly don’t remember if putting a transit option [on the bridge] was ever suggested.”

The rendering of the bridge that will soon be erected is certainly sleek and elegant, warding off infrastructural decay and possible calamity. But the additional goal of expanding to nine lanes, to supposedly “alleviate congestion,” is a fool’s errand: building more roads only causes more traffic.

But what if our leaders had accepted that traffic is inevitable, and in fact will only decrease when cleaner and more sustainable alternatives are available? What if we reacted to Hurricane Sandy with ideas that were less susceptible to storm damage, like above-ground lines? What if we realized that New Yorkers’ lives and careers are increasingly oriented from one outer-borough to another, and don’t always involve Manhattan? What if we thought about the amount of commuters who are needlessly shuttled into Manhattan when going from Williamsburg to say, Dumbo?

Similar ideas (old and new) to connect these outer borough neighborhoods have included streetcars and trolleys, but seeing as we are certified transportation experts, we can one-up those.

Our other brilliant idea is the Triboro Rx line, to be enacted on existing (but discontinued) freight rails. The two lines could work seamlessly together to transform the commuter experience:

Perhaps the problem with new Kosciszko Bridge project is that most of the community participation meetings occurred about a decade ago. Even just ten years back, NYC didn’t have as much of a pro-mass transit culture as it does today. During these meetings and reviews, the proposal for a rail line in conjunction with the new structure was rarely, if ever mentioned (a freight rail was considered at one point, while a pedestrian path and bike lanes have actually been included in the new design, which is a first for this particular roadway).

An obvious concern with constructing new mass transit, of any kind, is cost.

“Including mass transit on the K bridge is a huge idea that would need lots of funding and support,” explained Laura Hoffman, another Kosciusko Bridge Stakeholders Advisory Committee member.

“The added capital cost, plus the maintenance cost, can be prohibitive, and it creates a static use of a portion of the bridge,” Toro added. “So, many transit advocates have shifted from promoting things like light rail and streetcars, and now we push for bus rapid transit-type systems, which can be implemented more easily and at a fraction of the price.”

However, no such options are currently planned. Even with the cost of a static train line, there would be little to no tunnel-boring required for an above-ground rail (this was the major cost of the second avenue subway’s $4.45 billion price tag). And it would be involving a project with $800 million already allocated, and the once-in-a-lifetime opportunity that comes with constructing something from scratch. It seems like a sad waste of vision and leadership that mass transit was not more seriously considered.

Greenpointers has reached out to the New York State Department of Transportation, the Metropolitan Transportation Authority, and advocacy groups like Transportation Alternatives, among others, for comment. Should anyone have qualified comments or information as to why such a mass transit plan would be infeasable, prohibitively expensive, or, in contrast, plausible, we’d be happy to update this piece with your viewpoint.

Full resolution mock maps appear below (click on the images): 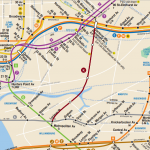 A proposal involving a shuttle / train only over the bridge itself. 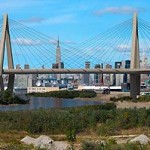 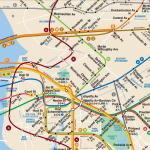 The proposed “K” line would serve areas like the Brookyln Navy Yard, Wallabout, and Red Hook, while also connecting neighborhoods that currently require a trip into Manhattan. 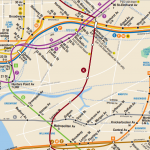 The extension of a proposed rail line along the BQE. 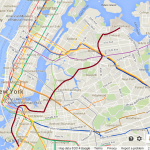 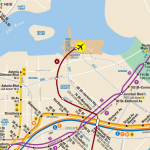 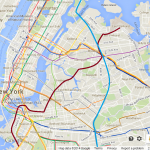 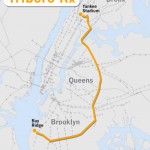 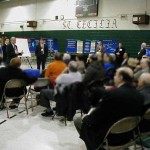 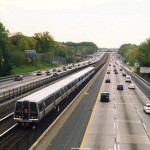 A stretch of the DC Metro’s Orange Line runs in conjunction with I-66. 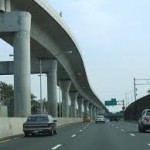