Five weeks after releasing a statement announcing that the L train shutdown is averted, the MTA announced its “Alternative Service Plan” for construction on the Canarsie Tunnel during nights and weekends, when L trains will run every 20 minutes from Bedford Ave to Manhattan.

The work would begin on April 26, and is estimated to last 15 – 20 months. The previous plans to lengthen the G train and provide shuttle buses across the Williamsburg Bridge are not included in the new plan, but service will increase on the G, M and 7 subway lines. An MTA shuttle will run from Bedford Avenue to the J/M Marcy Avenue station and to the G/L Lorimer Street station and back, according to amNew York.

According to NBC New York, the plan includes (and excludes):

END_OF_DOCUMENT_TOKEN_TO_BE_REPLACED

Service changes for the G train are slated to begin March 1, to make way for construction crews to install three elevators at the Greenpoint Ave stop, Councilmember Stephen Levin posted on Facebook:

We have some service changes to the G Train coming up as we make the line better. Here are the details

1. The next phase of the project to bring full ADA accessibility to the Greenpoint Avenue G station, including three new elevators and other accessibility features, will require round-the-clock track and platform access to construction crews. Beginning at 10:00 p.m. on Friday, March 1, 2019 until 5:00 a.m. on Monday, April 1, 2019, northbound G trains will not stop at Greenpoint Avenue. Customers will be able to access the station by taking MTA NYC Transit bus service or taking a northbound G train to 21st Street in Queens and then back riding on a southbound G train to Greenpoint Avenue. There will be no change to southbound G service during this time at this station.

2. Beginning at 12:01 a.m. on Monday, March 4, 2019 until 5:00 a.m. on Monday, April 1, 2019, southbound G trains will not stop at the Flushing Avenue G station. This southbound bypass is necessitated by an MTA NYC Transit flood prevention project at the station, as the staircase leading to/from the southbound platform of the station will be closed for the flood mitigation upgrade. Customers will be able to access this station by taking a southbound G train to Myrtle-Willoughby Avenues and then taking a northbound G train to Flushing Avenue. There will be no change to northbound G service during this time at this station.

A shuttered Shell gas station at 2 Bushwick Ave. where five spills were reported from 1989 – 2006 is being identified as the potential source of the L train petroleum stench that has resulted in multiple sick passengers and workers since last week, NY Daily News reports.

The Dept. of Environmental Conservation received the spill reports from the former gas station owners whose business operated directly above the L train between Grand Street and Graham Avenue as recent as 2017.

The DEC is not officially placing the blame on the former gas station for the L train oil smell, the NY Daily News explains:

Transit officials said the tank was abandoned for more than 20 years after DEC officials opted not to remove it, citing its proximity to the subway tunnels. But their timeline may be off — fuel was sold at the gas station as recently as 2017.

DEC spokesman Sean Mahar said Monday that the agency had not yet identified a single source of last week’s disturbing odor, and that a comprehensive investigation into the issue was ongoing.

City Councilman Antonio Reynoso, whose district includes the vacant station, said his office received very little communication from the MTA on the source of the L train stink.

“To make matters worse, the information we have received is conflicting and leaves many unanswered questions about the gravity of the situation and its impact on the health of the riders and residents,” said Reynoso. “This is especially angering and adds insult to injury when considering that north Brooklyn has a history of experiencing environmental injustices, specifically oil spills.”

Seems like the @NYCTSubway has brought in some extra fans to place on top of the L train tunnel in order to vent out the diesel fumes.

Not really helping much as I’m standing on the platform.

This is on Graham Avenue in Brooklyn.

END_OF_DOCUMENT_TOKEN_TO_BE_REPLACED

Nighttime and weekend L train service will be suspended starting tonight through Mar. 18, for maintenance to the Canarsie Tunnel that was planned prior to Andrew ‘Amazon’ Cuomo’s intervention last month.

What’s the work? As part of the revised L Project, we’re still moving forward on the long-term reliability improvement work we had originally planned. This includes installing brand new rail in the tunnel and along other critical sections of the L line, and preparing key switches and signals. For you, this means our track will be safer and trains will run faster and smoother, and that we’ll have the right signals to run the one-track operation come April.

This work requires full track access because of how the track installation and signal work is implemented, meaning that there will be no L service between 8 Av and Broadway Junction during these weeknights.

Between Broadway Junction and Lorimer St, connecting with Marcy Av J subway
Loop between Marcy Av J, Hewes St J, Broadway G, Lorimer St-Metropolitan Av G, and Bedford Av.
These shuttle buses are free and will stop at L subway stations between Bedford Av and Broadway Junction. You can also use the MYmta app for the latest trip-planning information and check out these timetables for estimated last train departures, from key stations:

What’s the work? As part of the revised L Project, we’re still moving forward on the long-term reliability improvement work we had originally planned. This includes installing brand new rail in the tunnel and along other critical sections of the L line, and preparing key switches and signals. For you, this means our track will be safer and trains will run faster and smoother, and that we’ll have the right signals to run the one-track operation come April.

What should customers do? If you’re travelling between Manhattan and Brooklyn, you can take special weekend M service, A or C trains and free shuttle buses. M trains will operate to and from 96 St Q station in Manhattan. To connect with the A, C and M trains, as well as free shuttle buses for service in Brooklyn, you can use Myrtle-Wyckoff Avs and Broadway Junction stations.

If you’re traveling in Brooklyn, the L will operate between Broadway Junction and Canarsie Rockaway Pkwy. We’ll also be running three shuttle bus routes making stops at all L stations between Bedford Av and Myrtle-Wyckoff Avs:

Be sure to check back here as we work through the details of the revised L Project plan for any changes to service. Be sure to plan ahead using the MYmta app for the latest trip-planning information.

END_OF_DOCUMENT_TOKEN_TO_BE_REPLACED 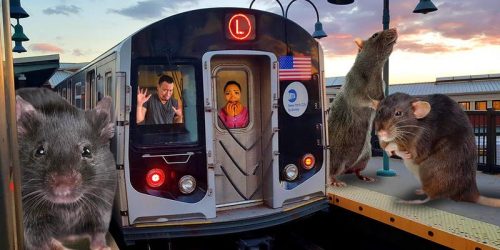 The MTA is holding an emergency L train public meeting Tuesday at noon to discuss the new plans regarding the non-shutdown of the Canarsie tunnel between Manhattan and Brooklyn. The meeting will be live streamed.

Cuomo’s announcement two weeks ago rocked the Brooklyn universe and understandably upset the renters and business owners who already relocated, not to mention the community leaders who worked for three years on mitigation plans and questioned the announcements’ lack of specifics.

The L train was scheduled to see 15 – 18 months of major service disruptions beginning in April, but as the story goes, a distraught Brooklyn man pulled Cuomo’s lapel, inspiring the Governor to assemble an engineering team of experts to visit the Canarsie tunnel. END_OF_DOCUMENT_TOKEN_TO_BE_REPLACED

Imagine how much easier it would be for alternative transportation with the L train apocalypse if there was a parallel subway line from Williamsburg providing another route to Manhattan!

In 1929, such a godsend of a line was not only planned but began construction; the plans did not get very far. The city dug out a tunnel that still sits under Williamsburg at S. 4th Street. Subway historian Benjamin Kabak described the tantalizing phantom subway line in his blog Second Avenue Sagas.

Kabak revealed the existence of the huge subway shell as part of his underbelly project. He claims that the envisioned subway tunnel was intended to accommodate four subway lines, which would have made it one of the largest stations in the city. Cruelly, the partially excavated tunnel sits just above the Broadway stop on the G line. The plans were tragically visionary: According to Kabak, both the Sixth Avenue and Eighth Avenue lines would have passed through this station, bound for multiple points east, south and north.

In September 1929, the Board of Transportation announced a subway expansion plan called the Second System, which is documented in Joseph Raskin’s book The Routes Not Taken, a Trip Through New York City’s Unbuilt Subways. END_OF_DOCUMENT_TOKEN_TO_BE_REPLACED 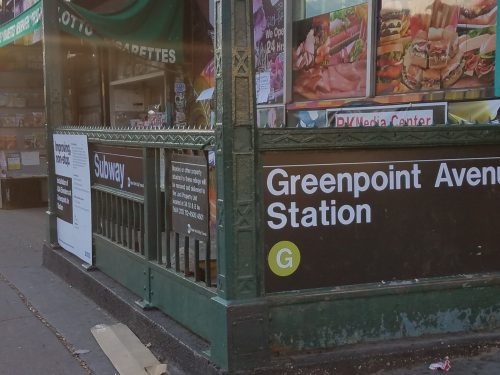 The Greenpoint Ave G train station will experience a series of service interruptions this winter starting Nov. 30, the MTA announced on Wednesday.

December will see the most interruptions for the Greenpoint Ave G train station, which is scheduled to close during weekends, and weeknights 9:45 p.m. – 5 a.m. from Dec. 3 through Dec. 24. Southbound G train service is also suspended from the station Nov. 30 through Dec. 31, but northbound trains will run.

The closures are due to the upcoming L train reconstruction and the ongoing $23.4 million MTA project to make the Greenpoint Avenue G subway station compliant with the Americans with Disabilities Act by installing three elevators, powered gates, and braille signage amongst other upgrades.

Construction on the elevators commenced in September and is estimated to wrap in spring 2021. The southern end of the station will have elevator access on the East side of Manhattan Avenue between Greenpoint Avenue and Kent Street. Two addition elevators will be installed for the north and south G train platforms. END_OF_DOCUMENT_TOKEN_TO_BE_REPLACED 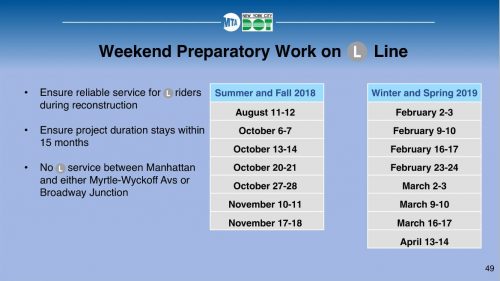 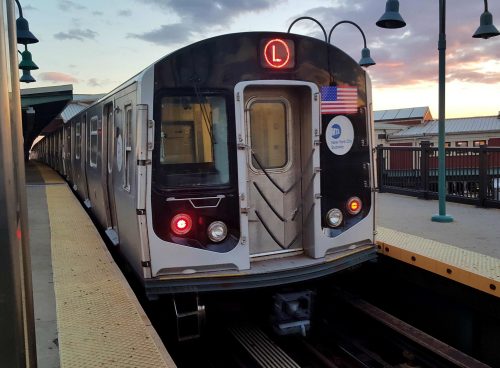 Good morning, Greenpoint! It’s Friday, and time for the Hook-up. Sometimes, I think we should just rename this column “Another Week, the Same MTA,” since it seems that most of the things that get a line here are subway-related. That’s true as ever this week. Punch, Pepper-Spray, Hardware and High School are all, in their myriad and sundry ways, subway stories. So, step in, stand clear of the closing doors.  END_OF_DOCUMENT_TOKEN_TO_BE_REPLACED