While crossing over the East River during my daily ride on the East River Ferry, I would often see fishermen cast their lines into the dark polluted waters, hanging out on India Street Pier having a good time, in the rain or sunshine.  Some of them were members of Brooklyn Urban Anglers Association, whose fishing derby this year would end with an East River Fish Fry. 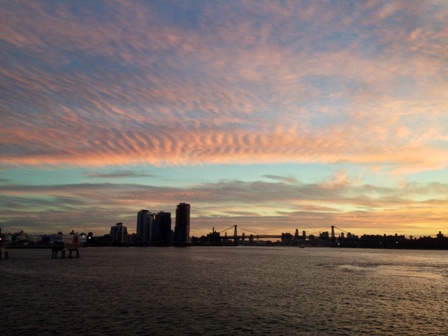 Last weekend was the 2013 Brooklyn Fishing Derby and it was freezing cold. Many competitors stayed out practically all night or started early morning during the weekend, at many different fishing spots along the river.

There was good energy felt among the familiar faces on the pier and unsurpassed patience while waiting for the sounds from the small bells on their fishing rods, to signal a fish has taken the bait.

Despite the high winds, many urban anglers were in great spirits and benefited from their time spent in tranquility. I always feel at peace when I wait for the ferry in the early mornings, because there is never a dull moment when I stare into the water and its surroundings. A flock of ducks fly overhead or a group of cormorants would dive down into the water below to hunt for crabs or little fish.

Jan Gorz, a BKUAA member, explained that fishes larger than 28 inches are allowed to be kept, while smaller ones are supposed to be released back into the river. On the first day of the derby he caught a 11 lbs, 32″ Striped Bass.

The past derbies were usually a month long and had cash prizes for the biggest catch, but this year Ben Sargent wanted to do things differently. He expressed that he wanted to bring back the feeling of community and more importantly remind everyone of their ability to be self sustainable.

In the past the East River thrived with clear water and salt marshes, but oil spills and sewage run off contributed to the river’s deteriorating health. In spite of the signs saying “CAUTION: No Swimming, No Fishing, No Canoeing” people still do it.

One might think twice about eating anything from the East River, but the main two fishes of interest are the Blue Fish and Striped Bass, which are migratory fish that swim through.

As previously mentioned: “These are the same fish being caught in Montauk and Martha’s Vineyard,” Sargent said, “We want to show the public that people can eat the fish here.” I found myself repeating this to my friends and to people interested in the outcome of the derby. Would you eat fish caught from the East River?

While waiting for the big fish to rise up to the bait, other specimens were caught, like ling codfish, perch fish, and a baby spider crab.

Scott Behr, has been fishing since 2010 and owns Total Metal Resource, a metal shop in Greenpoint. He caught a  33″ 12.08 lbs bass putting him in the lead on Saturday night, after Jan Gorz’s 32″ 11 lbs bass.

Alex Marquez, an avid fisherman, makes time every Tuesday to catch what the tide might bring in. Fishing for him has become a fun past time and he occasionally fishes out in Montauk bringing home a fish to cook for his family.

Just hours before the end of the competition John Ruffino (pictured at top) caught a 36″ bass and by 3 pm there was a final weigh in. The three competing fish were packed away in the cooler, as Ben Sargent weighed them one by one at Dream Fishing Tackle. It was John Ruffino’s fish that won the trophy, weighing at 15.52 lbs. 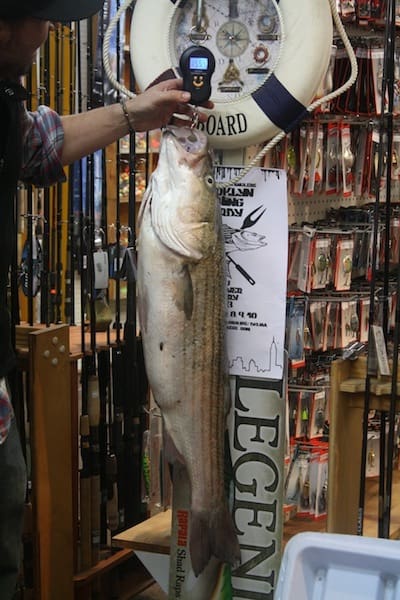 After celebratory hugs all three fish were sent to the backyard to be cleaned and eventually eaten. 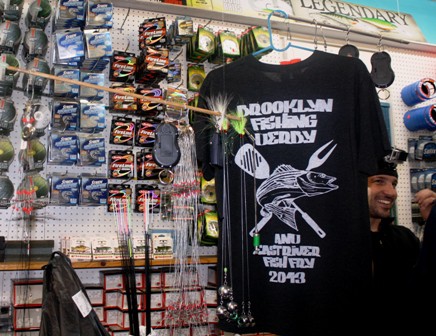 Keep in mind this isn’t just a man’s sport, a couple of fisherwomen braved the strong freezing winds to take the challenge of catching a bass. I asked Barbara Piskorska, daughter of Robert Piskorska, who owns Dream Fishing Tackle, if she participated in the derby. She and a couple of her co-workers fished on the North 5th Street Pier from 9 pm to 4 am on Friday night, and on Saturday she stayed out till 1 am. “It got too cold and I took a break in my car to warm up!” Barbara said.

Fishing has been her father’s passion, and what first started as a hobby turned into a business. “Originally my father owned a leather jacket store at 674 Manhatten Ave, then he put out a table of fishing gear and it sold right away.” This led to Robert expanding his idea and Dream Fishing Tackle was born.

In the Dream’s backyard the cooks were starting up the grills, in preparation for the fish. There was also Blue Fish (that wasn’t caught from the East River) on the grill from a restaurant in Park Slope, called Fort Reno.

Adam Geringer-Dunn, Vincent Milburn, and Ben Sargent chopped up Jan Groz’s Striped Bass as an ingredient for the chowder soup. 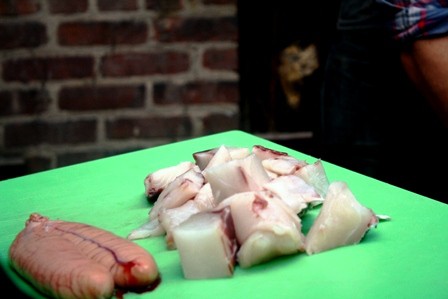 Chef Jacques pulled out the roe (fish ovaries) from the other Striped Bass and layed it on the green cutting board. “This would be great huevera!” my sister said excitedly, as we eagerly waited for the chowder to be done.

The chowder was ready, John Ruffino’s fish was smoked whole, and the roe was grilled. “If you aren’t here tomorrow, you’ll know why!” Ben jokingly said as he passed around the soups.

The cooks behind the grills were Jacques Gautier (Palo Santo and Fort Reno), Tim Coughlan (pit master at Fort Reno), and Adam Geringer-Dunn and Vincent Milburn, both from Greenpoint Fish and Lobster Company.

The food was amazing, everyone loved it and survived! 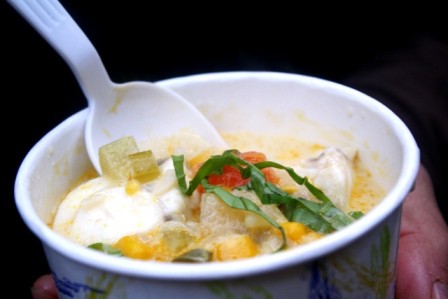 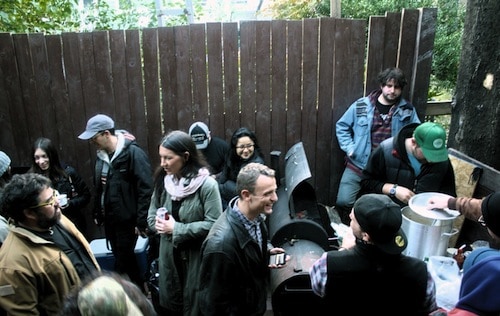 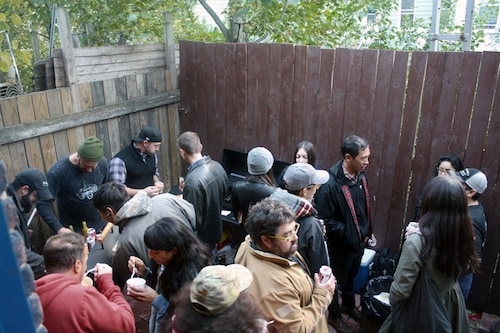