Growing up, I lived a stone’s throw from Lake Michigan.  Nearly every day during the summer I’d go to the beach, but on the hottest afternoons, I stayed indoors. On these lazy days, I’d grab a fistful of freshly peeled carrots (this was before the ubiquity of packaged “baby carrots”) and a stack of picture books, and disappear for a while to my hiding spot— above a floor vent, under a sunny window, behind a big, blue chair.

On my summer reading list: Tomie DePaola’s Strega Nona, The Funny Little Woman by Arlene Mosel, Peggy Parish’s Amelia Bedelia, and anything that included cooking. One of my favorite books was a Looney Tunes Little Golden Book featuring Porky and Petunia Pig harvesting carrots of all shapes, sizes, and colors: yellow, white, purple, orange, long, short…and so on.  I found all of this variation fascinating, as I’d only seen my favorite crunchy snack in orange.

It wasn’t until I was grown up and at an NYC Greenmarket that I experienced my own awakening to the world of carrots. It’s just as Porky said it would be, I thought. There are so many different kinds of carrots, each with unique characteristics — some sweeter, some crunchier, some squat like a turnip. I love them all, which is why I want to keep them all…forever…in my cellar…mwwwahahaha… Or maybe just keep them for a week or two in my fridge, in a  lovely brine of my own creation! After all, they’re so irresistibly tasty that they’re not likely to hang around for more than two weeks. 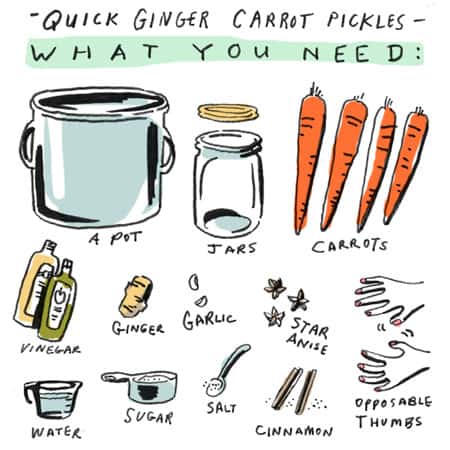 Pickling for Beginners: If you haven’t tried making pickled vegetables sooner because you thought you needed some special canning equipment and know-how, think again. Yes you can! Start with the simplest technique— the refrigerator pickle. Unlike making shelf-stable pantry preserves, you will not need to use a boiling water canning bath. With quick pickles, you generally just slice up your vegetables, bring your brine to a boil, and pour the boiling liquid over the fresh, raw veggies. The mixture is then cooled to room temperature, packed into some sort of air-tight container, and kept in the fridge for a couple of weeks to a month. Start with a tested recipe, but don’t be shy about using your own favorite spices to create your perfect pickle.

These Ginger Carrot Pickles are a variation on Smitten Kitchen’s Pickled Carrot Stick recipe. Where she used dill, I warmed the flavor up with notes of star anise, cinnamon and fresh ginger. I like to put these on shredded chicken lettuce wraps, then top finish with an extra splash of brine and a squeeze of lime.

Directions: Lay carrots in a medium-sized, heat-proof bowl. In a medium-sized pot, combine the water, vinegar, sugar, garlic, salt, and spices. Bring the brine to a boil, then reduce heat and simmer for 2 minutes. Carefully pour brine over carrots and allow the mixture to come to room temperature. Pack into jars or Tupperware and chill for a day so in the fridge to let the flavor develop. The recipe divides nicely into two pint-sized jars, but you can also just pack them into one tupperware container. Carrot pickles will keep nicely in an air-tight container for up to a month.