(Not) Forgotten Greenpoint: “Taj Mahal For All The Birds… & Elvis!” – Beverly’s Memories & Karen None Of Your Business 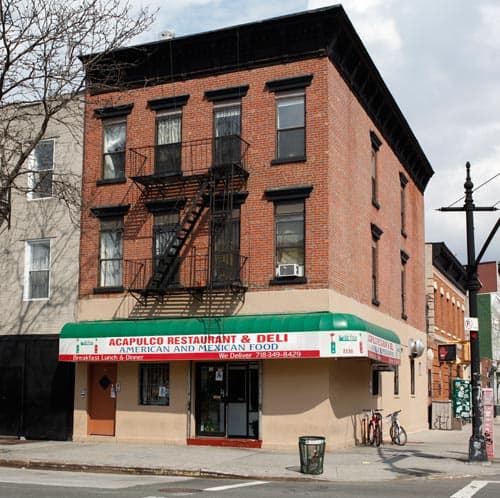 When I first took over Greenpointers, Beverly, an original Greenpointer who now lives in Florida and stays connected through the website, wrote me one of the most inspiring messages about her mother’s Irene’s Social Column that was in the Greenpoint Gazette in the 70s.

Her warm wishes made me feel that I’d made the right decision to work on this amazing blog and serve Greenpointers who don’t even live here anymore – but still love it and want to keep up with the neighborhood.

She recently wrote me to ask a favor, to fulfill her birthday wish by doing what I do best, photography! She asked me to send her a photo of the building she grew up in, which happens to be the home of Acapulco Restaurant on Manhattan Ave and a house her parents owned on Clay St.

With Beverly’s permission I share her special email that gives us some great insight into Greenpoint of the past:

My Grandparents had the apartment next to us and on the first floor where the other two apartments are (even though it is one flight up), lived an Aunt and Uncle in each apartment.

Although we did not own the building, at one time it was only rented to family members of mine.

There use to be a Bar & Grill downstairs that closed up very early in the 50’s and stayed that way well past the 60’s and if not mistaken into the 70’s.

One unique thing about the apartments in that building, the apartment one flight up and on the left hand side has a unique thing within it. From the kitchen into the bedroom and parlor, you actually had to walk up like 2-3 steps and then walk down 2-3 steps.

My Dad raised Pigeons there and had a huge Pigeon Coop on the roof that he and my Grandpa treated like it was the Taj Mahal for all the birds.

My Dad raised and trained those Pigeons to fly in formation and also raced them, as at that time there were many “Pigeon Clubs” throughout the New York City area.

When you first enter the building and pass the double doors, there is a long hallway before you get to a staircase that curves to the right which brings you to a rather large landing. On that landing is where my Aunts kept the Baby Prams and where my brother and I kept our bicycles and sleds, roller skates and assorted “stuff” under the staircase area that leads to the second landing.

Then of course the last staircase led to the roof where the Pigeon Coop was.

I remember when they first installed steam heat in the building. Of course that meant putting in “risers” so that the heat can come up and because they placed a riser in the bathroom where none of us were use to it. One day as I got out of the bath tub as a little girl and bent over to get my clothes on, YEP……….I burned my butt on the riser and it was so hot that I actually had a huge blister.

My Dad was furious that no one thought to put an insulating protective cover around it and called the landlord late at night waking them up and making them come take care of it first thing in the morning.

Back then, we never ever locked our apartment doors as this allowed various family members who lived in the building to just come in any of our apartments. The ONLY door that was ever locked was the inner door when you entered the vestibule.

There was a machine shop next door for a few years and next to that was an apartment building that had “Pete’s Grocery Store” on the ground floor. Pete and his wife lived at the back of the store and on Sundays if you needed something (stores were closed on Sundays back then), you would walk all the way to the back of the hall and knock on their “private quarters” door and Pete would let you get what you needed and put it on your “TAB” which was an index card with how much you owed and how much you paid.

Back then most of the places in Greenpoint like that had “in house charges” for their regular customers. They knew the men got paid on Thursday or Friday and before they went home from work, they would go to whatever store it was and settle up the weekly bill. I know it worked really great for my brother and I as if we wanted candy, ice cream, soda or something, all we did was go to Pete’s, pick what we wanted and tell him to put it on the bill. This way we didn’t have to bug Mom for the money and also risk her saying NO. Dad would pay it and Mom never knew the junk we had consumed all week and how much we also bought for our friends too. It was a great set up!!

Next to Pete’s Grocery Store was another Bar & Grill that was owned by a lady named Sophie. Sophie lived in the only apartment that was over the Bar & Grill and I remember it being furnished absolutely gorgeous !!!!! I can tell you with 100% fact, that Sophie had a daughter who was trying to make it into show business named Dorothy and please believe me when I say that Dorothy was dating Elvis Presley for awhile. In fact, Elvis had given a Black Poodle to Sophie named BUTTONS. The dog actually belonged to Elvis and Dorothy but with them on the road so much, they felt it was not fair to Buttons, so they gave the dog to her Mom. Since Sophie was busy running the Bar & Grill, it was my job to walk Buttons before school, after school, and after dinner and for my “time”, I not only got to play with Buttons all I wanted, but got paid 25 cents each time I walked him.

Jennifer, Greenpoint was a community of many surprises. Many famous people walked the streets of Greenpoint at one time or another. Mae West, Elvis and not sure if you are aware of it, but even Pat Benatar was born in Greenpoint ! Yep, she too is a nice Polish Girl….LOL

But all this is a walk down “memory lane” for me and this brings me to my request. Do you think if you have the time and if you even remember, do you think it would be possible to take a picture of 1116 Manhattan Avenue for me? It was my dream to return to Greenpoint for my 60th Birthday and have my picture taken in front of the building where I was born and raised…

My Dad’s Mom owned the house at 38 Clay St. refusing to sell to Harte and Co. for them to expand thus forcing them to buy up many houses on Dupont Street for their expansion. The house was in my family until my Dad’s sister passed away and I never did get a picture of that house either.” 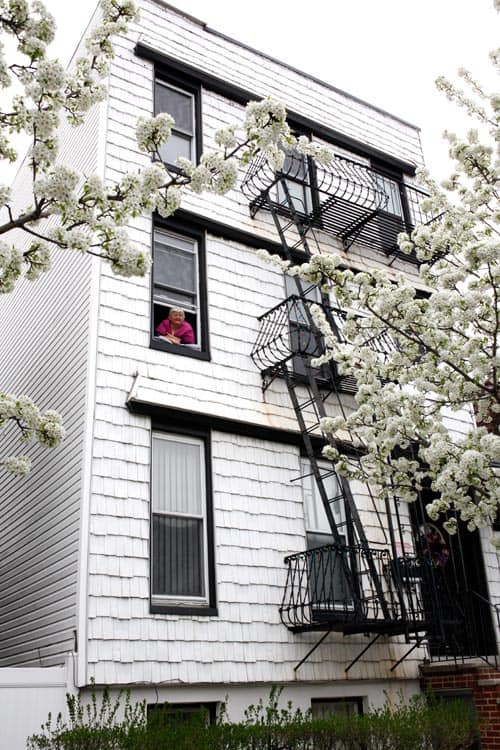 This is 38 Clay St and the woman in the window told me her name is Karen None Of Your Business. At first I thought that was a funny last name, but then realized she was just being a good New Yorker. She told me she grew up around the block on Dupont St and said she noticed how the neighborhood was “coming up,” how there are “no more drugs.” It was so bad at one point she moved to “the other side of Greenpoint,” closer to McGolrick Park, but now is back on Clay St, enjoying the views of the Manhattan skyline.