Chicano Batman packed Warsaw (261 Driggs Ave) for their second night in New York City. The fall tour supports their album Freedom Is Free, released in March. The album is among Billboard’s Best Albums of 2017 So Far and was recorded at Diamond Mine Recordings in nearby Long Island City. The tour kicked off in their hometown of Los Angeles late September, with three sold-out shows at The Fonda Theatre.

Openers Khruangbin & The Shacks started off the evening with mellow vibes and some instrumental tracks that felt almost improvised. The tempo eventually revved up a bit to pump-up the audience in preparation for the energetic headliners. Chicano Batman blends the sounds of soul, Brazilian Tropicalía and a bit of old school R&B. Like the well-dressed performers of their 1970’s predecessors, these are show men. You can see a display of that showmanship in their debut Conan performance filmed earlier this year. END_OF_DOCUMENT_TOKEN_TO_BE_REPLACED 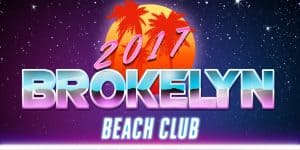 Join Brokelyn for boozin’ and beachin’ this Saturday (August 5) @ Coney Art Walls (3050 Stillwell Ave)! Unlimited drinks for three hours, games and more summer fun than you can stuff into your Speedo! Use discount code “GREENPOINT” for $14 off tickets. 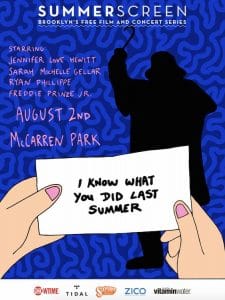 ♦ SummerScreen: I Know What You Did Last Summer @ McCarren Park, 6pm, FREE, Let’s toast … to us, to our last summer of immature, adolescent decadence. Gates open at 6pm, Sammus performs at 7:30pm, and the film starts at sundown, More info
* Trivia Night @Archestratus (160 Huron St), 8pm, FREE, Categories various, beer innumerable, arancine aplenty. There will be three rounds + a lightning round, but only one epic trophy, RSVP
* Goldeneye Tournament @ Sunnyvale (1031 Grand St), 11:30pm, FREE, 4 Fresh Controllers, 8 characters, But only one Oddjob. Martinis at Happy Hour prices and $3 beers, More info

# Long Island Breweries Night @ Barcade (388 Union Ave), 4pm, FREE, Bevy of breweries for a night celebrating all things Long Island, More info
# Lust, Brains, and Taste @ MOFAD (62 Bayard St), 6:30pm, $30, Titillating evening exploring how taste, smell, and all of our other senses drive attraction and desire, Buy tix
* The Mx. Nobody Pageant @ Brooklyn Bazaar (150 Greenpoint Ave), 8pm, FREE, The Nobodies are back with the second year of their signature un-pageant. Competitors throw down the Newness, Outlook, Passion, and Eeugh it takes to make us scream NOPE, More info
END_OF_DOCUMENT_TOKEN_TO_BE_REPLACED

On June 3 & 4th, 400 local artists will open their doors to the public and showcase works and works in progress during this year’s Greenpoint Open Studios! Check out the the full schedule of events here!
There are more events in our weekly calendar! Submit Greenpoint events, too! 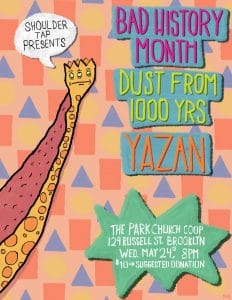 * Fight the Feed @ Legion Bar (790 Metropolitan Ave) 8pm, $10, How do you really affect change? Does marching in the street actually reach the offices of power, or do you need to get a meeting in those offices before they’ll really listen. We break down the protest memes, and get to what really makes a difference, Buy tix
♫ Bad History Month, Dust from 1000 Yrs, Yazan @ Park Church Co-Op (129 Russell St) 8pm, An intimate show of solo performances, More info
♫ Deep Space Brooklyn @ Output (74 Wythe Ave) 10pm, $10, Known as an adventure into future dub, spacey vibes, and abstract grooves, Deep Space features dj’s, musicians, dancers and poets who represent a breathtaking range of styles celebrating dub’s impact on so many forms of art, Buy tix END_OF_DOCUMENT_TOKEN_TO_BE_REPLACED

On June 3 & 4th, 400 local artists will open their doors to the public and showcase works and works in progress during this year’s Greenpoint Open Studios! Check out the the full schedule of events here! 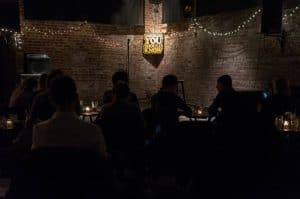