Cue the sad trombone music. Beloved Franklin Street watering hole, t.b.d. (224 Franklin Street) will shutter its doors this Sunday, March 4th. Pour one out for the bar, and of course their epic backyard featuring Greenpoint’s most Instagrammable wall, that—because Greenpointers are trend setters—was painted well before the dawn of Instagram. The bar will have discounted drink prices on wine, beer, and liquor. We’ll see you there for a fond farewell. Doors open at 4 pm.
END_OF_DOCUMENT_TOKEN_TO_BE_REPLACED 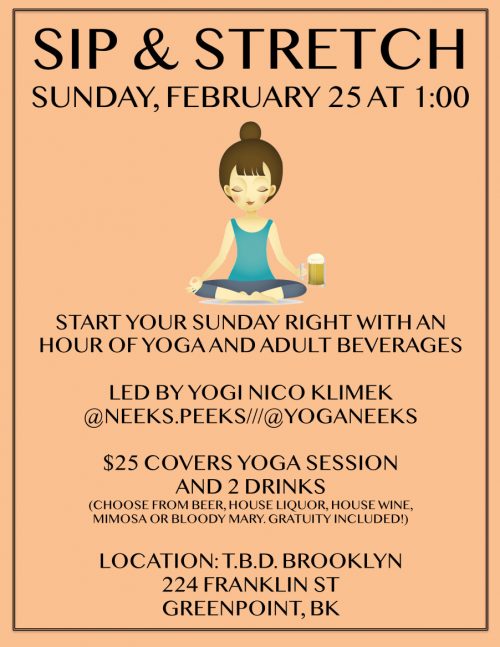 Greenpoint Beer & Ale (7 N. 15th Street)
Sip some delicious local and house brews, while grubbing on their tasty brewpub fare. Happy hour from 5-7, $5 beers and $10 for a share plate and a beer.
END_OF_DOCUMENT_TOKEN_TO_BE_REPLACED

Where to Drink Outdoors During This Two Day Heat Wave

Greenpoint (and pretty much all of NYC) will be experiencing record breaking temps of almost 70 degrees over the next two days. It’s March, people. Are you ready to strip off those coats? Here are some of our favorite outdoor spots in Greenpoint where you can soak up some of that good ol’ Vitamin E.

Lobster Joint – 1073 Manhattan Ave.
Open from noon every day, they’ve got a lovely New Englandy open air beer garden in the back of their seafood restaurant. Grub on a lobster roll and chill out with a beer.

More hotspots after the jump… END_OF_DOCUMENT_TOKEN_TO_BE_REPLACED On Saturday, September 20, the Rebel Alliance – and their friends and foes – will converge for a night of fun and debauchery at t.b.d. brooklyn (224 Franklin St). The huge lounge will be kitted out in Star Wars theme, including a full-sized Han Solo carbonite (see video), Salacious Crumb figure, Sith and Jedi light sabers, Mandalorian warrior probe and more. Original Star Wars artwork will be featured on the walls. END_OF_DOCUMENT_TOKEN_TO_BE_REPLACED

If you can’t make it to Brazil to find out then t.b.d. (224 Franklin St) is your best bet for watching all the World Cup madness. Soccer’s premiere international competition is just two days away and t.b.d. is your spot for every bit of world-class play. Plus they have some sweet drink deals! END_OF_DOCUMENT_TOKEN_TO_BE_REPLACED

Brunching for a Cause: Brunchtacular!

In Brooklyn, when we brunch we brunch HARD.  But, to brunch AND be philanthropic all at the same time?  Last Saturday Rally Downtown hosted Brunchtacular:  the mother of all brunches, in which a portion of the proceeds benefit The Lamp and Greenpoint Reformed Church Food Pantry.

The event was hosted at T.B.D., the largest beer garden in Greenpoint, featuring local restaurants:  Anella, Action Burger, Cafecito Bogota, Ovenly, The Bagel Store, Mabels Smokehouse, Selamat Pagi, and Brooklyn Label.    And get this: it was a three-hour, all-you-can-eat brunch, with bottomless mimosas.

In the midst of the brunch-madness, I was able to be chat with founder, Tom Gray and grab the inside scoop on Brunchtacular:

Greenpointers:  What was the impetus of “Brunchtacular” ?

Tom:  We thought it was a unique way to highlight local businesses, while supporting some great nonprofits organizations that serve Greenpoint and the rest of Brooklyn. END_OF_DOCUMENT_TOKEN_TO_BE_REPLACED Join us for a Taste of Greenpoint – Brunchtacular, Saturday April 27th 2013 at t.b.d. (224 Franklin St) from noon-3pm. A ticket will get you access to the largest beer garden in Brooklyn, a sampling from Brooklyn’s finest eateries as well as unlimited mimosas. All of this while supporting a local small businesses, and the NYC based nonprofit The Lamp.