Kicking off our series of local shops pulling together some of their favorite music for us, we have a mostly-vintage, acoustic-twinged and quite moody playlist from local vinyl source Record Grouch (986 Manhattan Avenue).

This is the kind of playlist you want to gently put on for a chilly and drizzly Sunday morning, while you curl up on the couch with a blanked sipping hot tea and reading zines. And by the time the Donna Summer track hits in the last half, your inner fire will truly be lit.

If you haven’t been down to Record Grouch, the cozy little shop’s got an eclectic mix of r&b, punk, metal, rock, kraut, and psych. You’ll find some rarer gems mixed amongst stuff you really should own but probably don’t have yet. This playlist, in addition to being Fall-themed, is a reflection of some of the things you might find there digging through the bins. END_OF_DOCUMENT_TOKEN_TO_BE_REPLACED 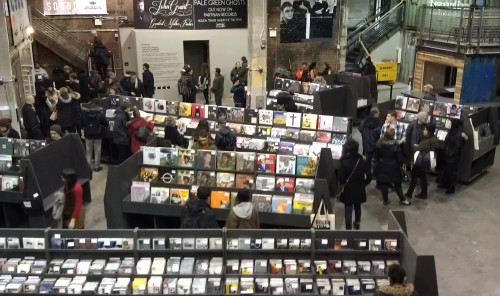 On Monday, Brooklyn’s newest record store opened its doors at 64 North 9th Street. It’s the New York home of famed British store/label Rough Trade and it seems like it will be a nice addition to the neighborhood. END_OF_DOCUMENT_TOKEN_TO_BE_REPLACED

Vinyl is alive and well. Besides a smorgasbord of little and medium-sized record stores throughout north Brooklyn, today marks the opening of Rough Trade, a 10,000 square foot monster of a music store with all the bells & whistles.  (NY Times)

Speaking of big buildings, the Pencil factory building next door to where Kickstarter has opened for business on Greenpoint Avenue is for sale.  “The three-story structure includes 17,485 square feet of space and is zoned for hotel, retail or office use” As long as it doesn’t become a Duane Reade I’m good.  (DNA Info)

The push to help those affected by Typhoon Haiyan continues locally with the help of the owners of Dalaga who are asking for much needed supplies, including: energy bars, tents clean blankets, towels, batteries, soap and medications. They will also be donating 100 percent of the proceeds from the store’s own line of jewelry, greeting cards and tote bags to the cause. Awesome.  (Greenpoint Gazette)

Our friends at Brokelyn let us know that somebody in Greenpoint was selling their Pee Wee Herman Chairy Chair on Craigslist and that’s news because Pee Wee Herman rules.

And finally, a rowdy bar in Red Hook hiked their drinking age to 25 because it was too noisy late at night. It’s a controversial move, but I’ll admit it, it sounds kind of nice.  (Time.com)