Another longtime Greenpoint Polish-owned business will close next week as the owners of Sikorski Meat Market (603 Manhattan Ave.) have decided to retire after 45 years in the butcher business.

The owners, Pat and Jim Sikorski, also operate a Bethpage, Long Island location of the meat market which will also close, according to a thank you note on the business’ website:

After 45 years of business we will be closing our stores on December 23, 2019 and retiring. It has been our pleasure serving you and we thank you for your loyalty and patronage. We will miss you!

END_OF_DOCUMENT_TOKEN_TO_BE_REPLACED

A Chopin and Gershwin concert with pianist Paul Bisaccia happening this Thursday in Greenpoint was originally scheduled at Carnegie Hall, but the event was canceled following controversy over the main sponsor’s anti-gay background.

The rescheduled event, From Chopin to Gershwin: For Our Freedom and Yours, Za Wolnosc Nasza i Wasza, is this Thursday (11/14) at 7 p.m., at St. John’s Lutheran Church (155 Milton St.); tickets range from $15 – $30 and are available here. END_OF_DOCUMENT_TOKEN_TO_BE_REPLACED

A new pierogi shop that was inspired by another restaurant based in Poland will open Wednesday on Manhattan Avenue in Greenpoint.

Pieroƶek (592 Manhattan Ave.) is from married couple Alexandra Siwiec and Radek Kucharski, who told the NY Times that the business will help to “maintain the cultural heritage” of Greenpoint against a backdrop of recently-closed Polish-owned businesses on Manhattan Avenue such as Bakery Rzeszowska (948 Manhattan Ave.) and Green Farms Supermarket (918 Manhattan Ave.) . END_OF_DOCUMENT_TOKEN_TO_BE_REPLACED

Bakery Rzeszowska (948 Manhattan Ave.) has closed after 34 years on Manhattan Avenue in Greenpoint. The Polish bakery was a go to for makowiec, freshly baked bread and authentic pączki near the Greenpoint Avenue subway for decades. A note posted on the front of the bakery’s building on Thursday gives thanks to their customers: END_OF_DOCUMENT_TOKEN_TO_BE_REPLACED

When Greenpointers received a tip last week that someone was allegedly passing out flyers identifying hate symbols following the discovery of hate stickers on McGuiness Blvd, we posted an image of the flyer to Instagram and began to receive many messages from local Polish residents that the Kotwica symbol should not be placed in the same category as the Swastika and other hate symbols. We also received messages insisting that the far right in Poland has recently used patriotic symbology during rallies, including the Kotwica. The local debate even received the attention of staff at the Polish Consulate in New York and the Greenpoint-based Polish and English radio station and news site, Radio Rampa, posted on the matter.

With the rise in hate crimes in NYC in 2018, along with the spread of hate symbol graffiti in Brooklyn, someone is passing out flyers in Greenpoint to educate on how to identify hate symbols. We reported on an incident from last Sunday in which a Greenpointer discovered a series of hate graffiti stickers along Mcguinness Blvd. Read more at greenpointers.com ——————————— Many Polish businesses display the Kotwika symbol. It was the symbol of resistance to the fascist forces attacking Poland, then became the symbol of independence against the Soviets. It’s a symbol of great pride amongst the Polish culture that has been co-opted by a small number of fascists today.

It’s a fact that the Kotwica is a symbol of the underground Polish resistance fighters who fought against Nazi occupation in the 1940s. The symbol to commemorate the resistance fighters is also found in Greenpoint on a flag during summer months at the Polish and Slavic Federal Credit Union on McGuiness Boulevard and on a mural on Eckford Street around the corner from the Warsaw music venue.

The Polish Kotwica symbol of the resistance against Nazi Germany and Russian Soviets has been misidentified as a hate symbol with the recent wave of hate crimes in Brooklyn. Earlier in the week we posted a picture of a flyer that someone was handing out in Greenpoint. The creator of the flyer placed the Kotwica symbol next to other well-known symbols of fascist groups, and we would like to clarify that the Kotwica is not a hate symbol. In fact, it can be found around Greenpoint in honor of the Polish resistance fighters who served. Every year it’s displayed on a flag at the Polish Slavic credit union on Mcguinnes Boulevard and is painted on a mural at Warsaw on Eckford Street. Scroll through and checkout the clip from @radiorampa, the Greenpoint-based Polish/English radio station.

END_OF_DOCUMENT_TOKEN_TO_BE_REPLACED

This Sunday Nov. 11, marks the centennial of Polish independence, and a series of cultural events in NYC will mark the occasion over the next two weeks. “Sto lat” translates to “100 years” in Polish and is the common phrase to wish someone happy birthday.

The U.S. helped secure Poland’s independence at the end of World War I when President Woodrow Wilson expressed America’s support for a Polish state in his Fourteen Points peace plan. Today, Polish and American relations are generally considered strong: President Andrzej Duda recently offered $2 billion toward constructing an American military base to be named “Fort Trump” in Poland.

END_OF_DOCUMENT_TOKEN_TO_BE_REPLACED

Sto Lat: 100 Years of Polish Independence and the End of World War I

“Sto lat” means 100 years in Polish and many Polish people will be celebrating the anniversary of the Armistice that ended World War I this weekend.

Sunday (11/11) marks the 100th anniversary of WWI , and with a special resonance for Polish people. One of Woodrow Wilson’s Fourteen Points, self-determination for small nations, meant Poland would re-emerge again as an independent nation after 123 years of being swallowed up by Prussia, Austro-Hungary and Russia.

100 years ago, Greenpoint had a huge Polish community, which sent many of its young men to fight in the Great War. Many of those local Polish lads did not come home. One of the fallen has always intrigued me. Frank Baliszewski, who lived in my house at 2 Clifford Place, died on October 4, 1918 from wounds he suffered in battle in France. I know little else about him, but I have often wondered about Baliszewski. His name still stands on a monument outside his parish church, St. Stanislaw Kostka (607 Humboldt St.).

END_OF_DOCUMENT_TOKEN_TO_BE_REPLACED

Green Farms Supermarket (918 Manhattan Ave.) was one of the local stores my Polish-born wife and I regularly shopped to get authentic Polish food, but the store’s last evening of business was just two weeks ago. Though it had an American name, we never called it Green Farms. For us the market was “U Chlopakow” and it was a vibrant piece of Polish Greenpoint.

The shelves were almost empty because the prices had been slashed and sadly only a few cans of Polish food, some mineral water and Polish beer remained. The owners, though, had not liquidated the store for lack of business, but because as owners of the building, the temptation to sell out and retire comfortably proved too great to resist. END_OF_DOCUMENT_TOKEN_TO_BE_REPLACED

Other businesses are not as faring as well. Budin (114 Greenpoint Avenue) has closed due to an ongoing dispute with the landlord  END_OF_DOCUMENT_TOKEN_TO_BE_REPLACED 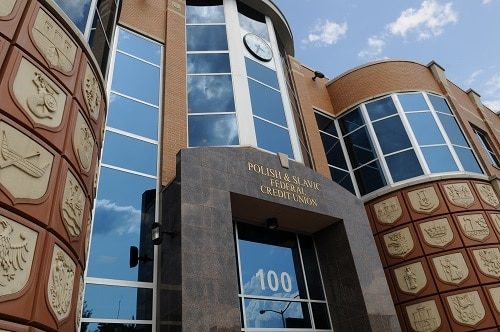 You may have noticed a Polish and Slavic Federal Credit Union (140 Greenpoint Avenue and 100 McGuinness Blvd)  booth this weekend at our Winter Candyland Holiday Market. That’s because the PSFCU is a major supporter of the Greenpoint community as a whole, celebrating over 40 years in the neighborhood!

The PSFCU owes it community-oriented nature to the way it’s structured. Unlike banks, credit unions are member owned, which means a credit union is “an integral part of the community it serves; profits earned by a credit union serve all its members and the local community they represent, including various community organizations (schools, churches, scouting and student organizations, etc.).” This year’s donations included Greenpoint organizations like the Slavic Arts Ensemble, and The Polonia NY Soccer Club

The PSFCU has been serving Greenpoint since 1976, aiding immigrants new to the neighborhood who were turned away from traditional banks when they applied for home loans. What we know today as PSFCU was established as the “Industrial and Commercial Federal Credit Union” by the founders of Greenpoint’s Polish and Slavic Center (177 Kent St. and 176 Java Street).  END_OF_DOCUMENT_TOKEN_TO_BE_REPLACED