A Chopin and Gershwin concert with pianist Paul Bisaccia happening this Thursday in Greenpoint was originally scheduled at Carnegie Hall, but the event was canceled following controversy over the main sponsor’s anti-gay background.

To bring the event to the neighborhood, the Greenpoint-based non-profit organization Town Square teamed up with local Polish Americans who recently started a grassroots initiative “Polish Friends of the Warsaw Public Library (US),” to help promote affordable cultural events in North Brooklyn where many Polish residents live.

PFWPL sent background info to Greenpointers on the event’s original cancelation and rescheduling:

The artists scheduled to perform discovered that the sponsoring organization of the concert, Gazeta Polska Community of America, was associated with profoundly anti-gay/right-wing Polish magazine (Gazeta Polska) that had distributed “LGBT-free Zone” stickers for shopkeepers in Poland to place in their windows. All the artists started dropping out – including Paul Bisaccia and Carnegie Hall eventually canceled it.

We felt we should offer a response, as Polish Americans, and we decided to invite the artists to Brooklyn to perform the original set here at St. John’s (an LGBT-affirming congregation), since Chopin is so important to Polish history and the country’s historical struggle for self-determination. We saw a link to the current LGBT struggle for acceptance in Poland. 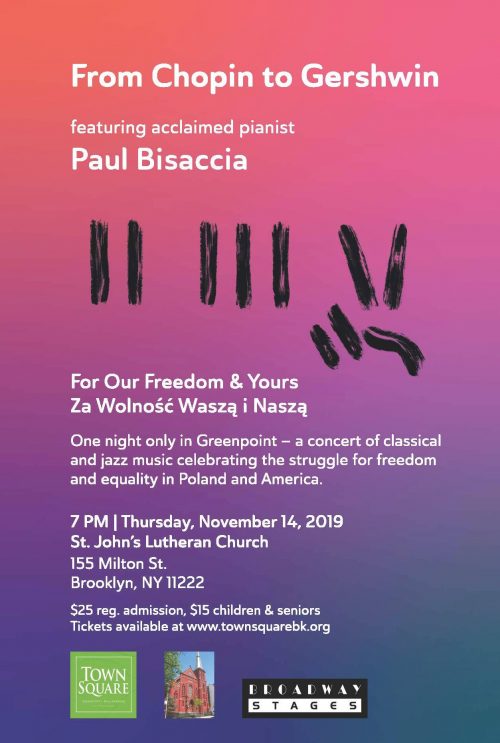