How McGuinness Boulevard Was Created

Maybe it is just me, but I find McGuinness Boulevard ugly. Huge trucks and streams of traffic wiz by the four-laned, soulless traffic artery. The newer apartment buildings lack the quaint charm of many of Greenpoint’s other streets, but this was not always so.

Once McGuinness Boulevard was not a boulevard at all, it was named Oakland Street; a narrow charming cobblestoned lane lined by wood frame 19th-century homes typical of our area.

Oakland Street would become a victim to a vision of New York City as a city of cars and trucks. The destruction of Oakland Street was only a small piece in the grand scheme of Robert Moses who built the BQE, the Tri-borough Bridge, and the Cross-Bronx Expressway. Thousands of homes across the city fell victim to Moses’ vision.

END_OF_DOCUMENT_TOKEN_TO_BE_REPLACED

The first Greenpointer was a woodworker: Norwegian immigrant, ship’s carpenter and master carpenter of the City of New Amsterdam, Dirck Volckertszen, built the first house here Near Franklin and Calyer Streets in 1645. Before settling locally, Volckertszen had often crossed the East River from Manhattan to cut local stands of timber used to build some of the first houses in New Amsterdam. Saftuik is a local woodworking shop that follows an old tradition in Greenpoint, but pioneers something new and socially responsible as well.

There is another connection between Volckertszen and Saftiuk- getting into trouble with the law. Volckertszen was often arrested and had multiple appearances in court; once for stabbing a man in the stomach in a bar brawl. He was also a reputed smuggler and might well have been a fugitive from European justice.

Saftuik would warm the cockles of old Dirck’s heart because it trains formerly incarcerated people to create one-of-a kind- home furnishings from discarded wood and other reclaimed materials. Saftiuk is the brainchild of Sebastian Saftuik Paulson, who grew up in the very woodsy North of Michigan where he developed his talent for carpentry and a social conscience.

So how did Greenpoint get to be the woodworking capital of New York City anyway? It all goes back to wooden shipbuilding. In the 1850s, there were 12 shipyards that lined the East River waterfront, building clipper ships and schooners, as well as requiring tons of wood. Mountains of wood were floated into Greenpoint and the waterfront resounded all day long with the sounds of wood saws and hammers. Naturally, lumberyards became important businesses. END_OF_DOCUMENT_TOKEN_TO_BE_REPLACED

The Namesake Behind McGuinness Blvd: Learn about “The King of Greenpoint” at Shayz Lounge Tonight! (10/18) 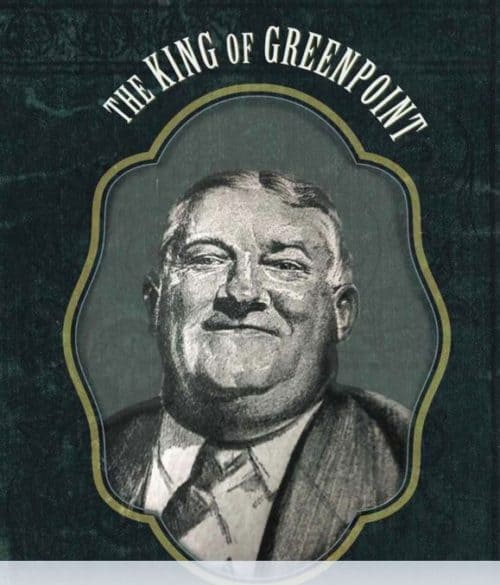 In a neighborhood where we like to keep it real, Pete McGuinness’ legacy lives on in much more than McGuinness Blvd. He was larger than life and one of the most colorful characters in local Greenpoint lore.

Pete McGuinness was an a 300lb ex-boxer politician who got us the G train, McCarren Park Pool, two parks, a bridge and more. During prohibition, he proposed distributing alcohol seized by the police to local hospitals saying, “It is a criminal shame to allow whiskey to lie while people who are lying at death’s door could be saved by it.” And if you thought today’s political climate is divisive, news headlines read that “fists may fly” between McGuinness and an opponent in a run for Greenpoint’s Alderman at City Hall back in 1928.

This is just a small glimpse of the character and life of Pete McGuinness and there is so much more interesting information in local historian Geoff Cobb’s latest book “The King of Greenpoint.”

Tonight he will be reading and will answer questions during a fun night of history and booze at Shayz Lounge (130 Franklin St) starting at 7PM! RSVP here.

Check out Geoff Cobb’s first book “Greenpoint Brooklyn’s Forgotten Past,” which “unearths a wealth of local history” and read his articles on Greenpointers!