The first Greenpointer was a woodworker: Norwegian immigrant, ship’s carpenter and master carpenter of the City of New Amsterdam, Dirck Volckertszen, built the first house here Near Franklin and Calyer Streets in 1645. Before settling locally, Volckertszen had often crossed the East River from Manhattan to cut local stands of timber used to build some of the first houses in New Amsterdam. Saftuik is a local woodworking shop that follows an old tradition in Greenpoint, but pioneers something new and socially responsible as well.

There is another connection between Volckertszen and Saftiuk- getting into trouble with the law. Volckertszen was often arrested and had multiple appearances in court; once for stabbing a man in the stomach in a bar brawl. He was also a reputed smuggler and might well have been a fugitive from European justice.

Saftuik would warm the cockles of old Dirck’s heart because it trains formerly incarcerated people to create one-of-a kind- home furnishings from discarded wood and other reclaimed materials. Saftiuk is the brainchild of Sebastian Saftuik Paulson, who grew up in the very woodsy North of Michigan where he developed his talent for carpentry and a social conscience.

So how did Greenpoint get to be the woodworking capital of New York City anyway? It all goes back to wooden shipbuilding. In the 1850s, there were 12 shipyards that lined the East River waterfront, building clipper ships and schooners, as well as requiring tons of wood. Mountains of wood were floated into Greenpoint and the waterfront resounded all day long with the sounds of wood saws and hammers. Naturally, lumberyards became important businesses.

After the Civil War, wooden shipbuilding started to decline, but two huge new industries arose that needed wood: oil refining and the sugar industry. Today, oil refineries use steel drums and sugar is bagged, but until the 1890s both industries shipped their products in wooden barrels and our area literally produced tens of millions of barrels. Many locals became coopers, or barrel makers, who had mastered the art of making watertight barrels.

One of the spinoffs of the barrel making businesses was water towers which are made in almost the same way as wooden barrels. For years, one of the biggest water tower builders were Rosenschweig Water tower Company on Berry and N. 9th streets in the Northside. Many of the water towers across the city were built by this Northside firm.

So where did all this wood in Greenpoint come from? you may ask. Well, a century or more ago whole forests in the Adirondacks were felled, lashed together and shipped down the Hudson River, but one local man wanted to get rich by sending down tons of lumber from Nova Scotia, Canada.

In 1888, a Greenpoint lumberyard owner, James Leary, floated his famed Joggins raft to Whale Creek (now Newtown Creek) in Greenpoint from Joggins, Nova Scotia. The 595-foot long wooden raft was 38 feet deep and the mass of logs was bound together with iron chains and steel wire and was almost as solid as the trunk of some giant tree. Leary used some of the timber for his shipyard, large amounts for his dock construction contracts, and the rest for sale at his timber yard. The raft safely arrived in Greenpoint to cheers and astonishment at its size after a trip of 700 miles from Nova Scotia, instantly making Leary a rich man. 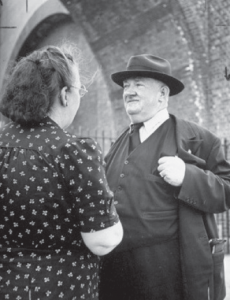 That same year, in 1888 Pete McGuinness, of Boulevard fame, was born on Eagle Street. As a young man, he became chief foreman in Orr’s Lumber Yard at the foot of Green Street. Pete’s job involved moving hundreds of pounds of lumber a day and the hard labor built the already stocky McGuinness into a powerhouse; his excellence in the lumber business, however, was more than physical. The management also respected his honesty, his rapport with the men, his intelligence and his toughness These lumberyard management skills would later prove to be the basis of his political success. 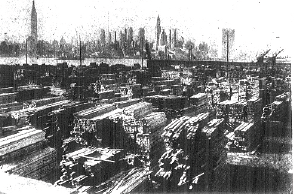 But the ex-boxer could use his fists on occasion too. Once, a ship was delivering a bad batch of wood. Pete refused to accept the wood, even though a dozen sailors threatened him. One of the sailors stupidly threw a punch at McGuinness who responded in kind. He quickly knocked out five of the startled group and lectured those still conscious on the need for honesty in business.

McGuinness once explained his love of working in a lumberyard. “Working in a lumberyard is like being in a health resort all year long. You’re out there in God’s good air all the day long, and from the smell of the different woods, you might as well be in a forest. And another thing you’re in with the most splendid people. I never knew higher-class type men than lumber handlers.”

Years later at the start of the Cold War he told a group of reporters his suggestion on peacetime military training. “If they was to leave this conscription thing up to me” he said, “I’d have the boys putting in a couple of years in lumberyards. It builds up every muscle in your body. Lumber handlers are the toughest men on earth. Bejesus, if the Russians or somebody knew they’d be up against lumber handlers, they wouldn’t start no trouble.”

Perhaps because of its proximity to the lumberyards, our area became a center for woodworking. Today, however, many of these small woodworking shops are leaving the area, driven out by the high prices of renting space. It is sad because woodworking has more than three centuries of history locally and there are still a number of craftsmen who produce locally. Let’s hope they remain and continue this old Greenpoint tradition.