If I had to pick one house in Greenpoint to set a horror movie in it would be the big old house set back off the street at the corner of Oak and Guernsey. The red brick facade, spooky wooden double doors, cast iron railings at the building’s entrance, as well as the iron fence and gate at lawn’s edge all are original, dating to the house’s construction in 1887.

The house has a fascinating history and it is connected to an equally fascinating man who had the presidency of the United States stolen from him in 1876: Samuel Tilden. Tilden is probably one of the people who gets the least credit for making Greenpoint great. Tilden was an absolutely brilliant corporate lawyer who knew a good investment when he saw one. He bought a huge piece of land before the Civil War in Greenpoint that covered an area from Calyer Street to Milton and east to Leonard Street including the land that St. Anthony’s church now sits on. Tilden did a lot for our state. He broke the corrupt Boss Tweed ring and helped write our state Constitution. In 1876 he really should have been elected president, but lost when his party, the Democrats, cut a dirty back room deal that ended reconstruction and sold him out. END_OF_DOCUMENT_TOKEN_TO_BE_REPLACED

Late last August, David Yoo of Davey’s Ice Cream became the person to finally sign a 15-year lease at the long-empty former Mona Lisa Coffee Shop(74 Meserole Ave). With two schools across the street, the post office, and tons of street traffic, that corner of Guernsey St and Meserole Ave is one of the busiest in Greenpoint. After a year of construction, the teal storefront and hand-painted sign From Overall Murals are finally ready for customers. And to celebrate the opening, Davey’s is doing their traditional opening party and that means ice cream for everyone!! END_OF_DOCUMENT_TOKEN_TO_BE_REPLACED

A Peep Inside Cacao Market : A Place Where Chocolate Dreams Come True 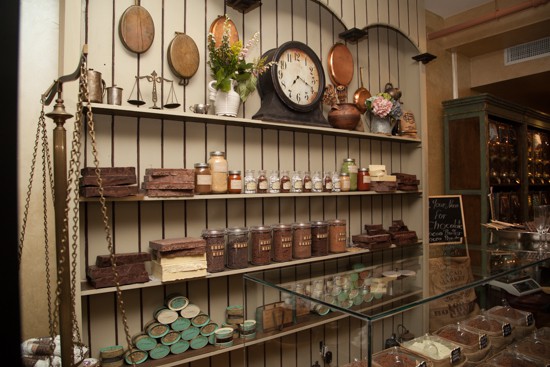 Greenpoint: home to craft brewers, small-batch ice cream makers, and luxury tea ateliers. And just when we thought things couldn’t get any more up-market, along comes the cherry on the top in the form of an artisanal chocolate shop.

Cacao Market opened this week on Guernsey street and is the newest venture by Maribel Lieberman, the Honduras-born owner of Soho’s chocolate boutique MarieBelle New York.

The new Greenpoint store is housed beneath the existing MarieBelle chocolate factory, which has been quietly churning out sweet treats since 2004. When the downstairs space recently became available it seemed the perfect opportunity to open a Brooklyn outlet. END_OF_DOCUMENT_TOKEN_TO_BE_REPLACED