Sadi Tekin Discusses Creating Tattoos, Illustrations, and Art in and around the Neighborhood

“Welcome to the magical world of Sadi Tekin,” the artist’s website proclaims. And magical it is — local artist and illustrator Sadi Tekin is a known for his enchanting and whimsy drawings that touch the heart and often go — per his recent venture into tattoo creations — skin-deep. We caught up with the Greenpoint artist (a recent presence at Greenpoint Open Studios) to discuss his Brooklyn dwelling, Kickstarter project, and upcoming projects.

Greenpointers: Do you live in Brooklyn, and if so where/how long have you been here?

Sadi Tekin: I’ve been living in New York since 2012, and four years of it was in Brooklyn. Now I’m in Greenpoint and loving it. END_OF_DOCUMENT_TOKEN_TO_BE_REPLACED

Heather Garland has been making art in Greenpoint since 2005, and as an artist she’s evolved alongside the neighborhood’s own transformation. Garland, a graduate of Pratt Institute, is a skilled and talented painter who blends her classic art background with the world of found objects.

Garland is fascinated by the functionality of objects and how their value changes when you consider their worth solely as art pieces. She mentioned an example: the bowl you place your cereal in literally feeds you, while an artistic bowl you might hang on a wall will feed your soul. Initially she started exploring painting on plates as a way to give herself a break from doing larger scale paintings.

Garland’s first plates were done quite fast, as a way to get a quick hit of satisfaction as she pursued pleasure through making artwork. Now her plates tend to be more intricate. Following this pursuit of pleasure coupled with her intellect, Garland assigns these plates a deeper value than their inherent functional one.

The titles of her works add a layer of meaning to the plates—like Abortion, a flower-like, fringe-infused plate artwork that is a part of the Nasty Woman exhibition at Knockdown Center (52-19 Flushing Ave.), curated by Garland’s friend, Roxanne Jackson.

END_OF_DOCUMENT_TOKEN_TO_BE_REPLACED

We recently discussed her process and approach when working in these various mediums, specifically her relationship to Syria and her family there during this now 5-year civil war. We also talk about Greenpoint, naturally, and how it reminds Gedeon of mid-90s Prague.

Greenpointers: What is you favorite thing about Greenpoint?

Christine Gedeon: What I love, especially about Greenpoint are the low buildings, the light, and the mix of cultures. The Polish community that was of course more present in the 90s and earlier, also for me had it’s charm, as I was living in Prague in 1996-97 and felt immediately comfortable in Greenpoint. If there had been a better connection to public transportation, I probably would’ve stayed there, but then again, so would many others, and that would’ve made it lose it’s character…

You were born in Aleppo, Syria, and raised in New Jersey… Can you tell us about the inception and process to create your work Syria..as my mother speaks… The 5-year civil war there is just devastating… can you give us some insight to the country and culture and how that fits into your work and everyday identity?

Yes, well, seeing what was happening as the war started, and how affected I was by it, I felt compelled to do a piece that had a more personal story, than what one was just hearing on the news… We left Aleppo in the 1970s when I was three years old, and moved to the U.S, for no other reason than my parents getting divorced, and there were more opportunities [in the U.S.] for my newly divorced mother. It was quite easy to move to the U.S. as Jimmy Carter was president, and my uncle sponsored us, so we obtained our green card right away, and became citizens some years later.

END_OF_DOCUMENT_TOKEN_TO_BE_REPLACED

Since 1999 Sarah Merenda has called NYC home though her travels have brought her all over the world. Growing up in Eastern Maryland and joining the family wall paper installation business as a young woman earned her an expert education in a trade that she later paired with a formal arts education in textile design. Sprinkle in a little grit and graffiti with a dash of Indian flair, stir together and you get MerendaWallpaper.

We were lucky enough to chat with her about her inspiration and process here in NYC, just before she left for another trip!

Greenpointers: You’ve traveled quite a bit… Even just in the USA: Baltimore, Atlanta, New York City… would you call NYC home? What makes NYC special?

Sarah Merenda: Yes, I feel like I have traveled more outside of the US then in it actually, but I would say New York City is my home. I’ve been living here since 1999.

I immediately felt at home in NYC the first time I visited when I was 15 and was inspired by the graffiti, the people, the ability to choose what you can do each day and be stimulated and learn from the cultures around me.

GP: In your travels, home or abroad, where would you say you’ve found the most inspiration?

END_OF_DOCUMENT_TOKEN_TO_BE_REPLACED

You may know Leon Reid IV through his street art or public art and now he has a new body of work conceived and developed in his Greenpoint studio over the last five years. Recently, I caught up with Leon at his studio to talk art, technology, and what it means to combine the two. END_OF_DOCUMENT_TOKEN_TO_BE_REPLACED 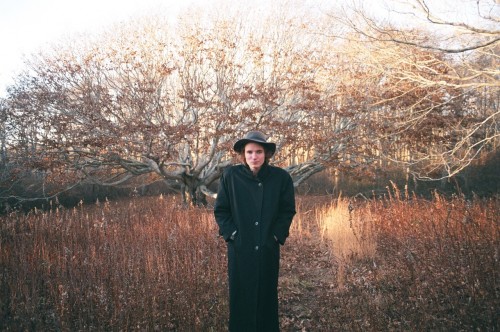 Originally born and raised in Brussels, Lewis Lazar is a Greenpoint-based painter and musician who draws elements of folklore into his visual artwork and photography journals. Throughout his career, he has had exhibitions worldwide in London, New York, and Nicaragua. Usually dabbling in watercolours, oil paintings, photography, etchings and Lino cut prints, Lewis creates to seek understanding of the world and communicate the acknowledgement of desires from needs, as well as disingenuous advertising when it comes to art and self-exposure. “It is not enough to know and to show, it also has to be lived and experienced,” he tells Greenpointers.
END_OF_DOCUMENT_TOKEN_TO_BE_REPLACED

Narayan Lockett is an artist expressing a dialogue between popular culture and his personal aesthetic, best described by his Instagram handle, “@postfeminism.” Working out of an independent screen-printing studio in Greenpoint for his t-shirt line Sensitive New Age Guy, his messages intertwine boyhood vulnerability and feminist empowerment. He founded Sensitive New Age Guy in 2014, also starting a music podcast to promote eclecticism and free-spirited fashion. END_OF_DOCUMENT_TOKEN_TO_BE_REPLACED

You’ve probably seen her work around Instagram. And if you haven’t, Jenna Bouma of East River Tattoo (1047 Manhattan Ave) is known for her signature style illustrations – characterized by bold, vintage icons with a dismal charm… all done without the help of a machine. Her commitment to hand poking purveys a traditional emphasis on taking one’s time and doing it well, despite a high-volume clientele. In the midst of today’s mindful action concerning “faster/cheaper” output (which by the way, her Instagram handle is “@slowerblack“), it’s another admirable reason to put her on today’s spotlight.

To check out more you can follow Jenna at @slowerblack on Instagram and the rest of the East River family at @eastrivertattoo.

A few weeks ago, painter Bryan Osburn was brutally attacked near his Greenpoint studio by a group of thugs who shattered his jaw and took his cell phone. Bryan has undergone extensive surgery to put his jaw back together and will need financial assistance as his body and mind heal.

106 Green has set up a fundraiser and the local artist community has rallied by donating artwork to help out one of their own. Donate, buy a raffle ticket, attend this Sunday’s event and show love the Greenpoint way! Here’s how you can help: END_OF_DOCUMENT_TOKEN_TO_BE_REPLACED

A Greenpoint Artist was Brutally Attacked and Needs our Help!

Boy oh boy, are things are getting rough on this northern tip of Greenpoint. If it wasn’t bad enough neighbors are having to deal with insane rent increases, head-splitting piling driving , sex-offender rumors, and Superfund sites, now folks need to watch their backs each time they go the to deli. Just ask Bryan Osburn, a 40 year old artist who was brutally assaulted by a gang of 4 thugs all for a cellphone, in front of God Bless Deli 2 on the corner of Clay Street and Manhattan Avenue. END_OF_DOCUMENT_TOKEN_TO_BE_REPLACED