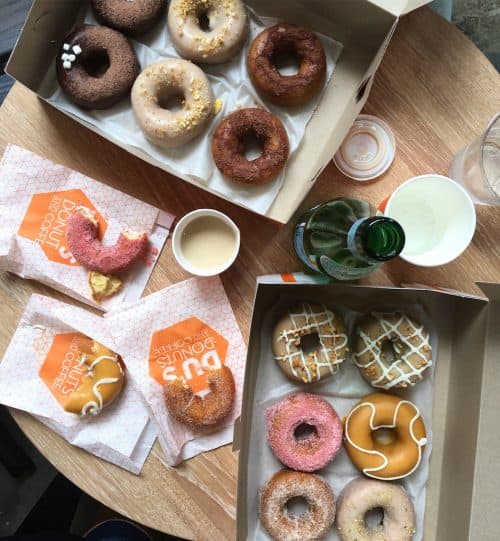 Greenpoint will always have our beloved Peter Pan, and on Wednesday, Williamsburg got its own doughnut shop. Du’s Donuts and Coffee, at the base of Williamsburg’s new William Vale Hotel, is easily one of the year’s most anticipated openings in the New York City food world. It marks the return of chef and molecular gastronomy poster boy Wylie Dufresne to the kitchen, after the closing of his world-famous wd~50 and Alder. Now, instead of edamame ice cream and freeze-dried corn, he’s putting his genius towards unique doughnut flavors alongside his pastry chef Colin Kull. Rest assured, the crowds will come. END_OF_DOCUMENT_TOKEN_TO_BE_REPLACED

60 Years In and Peter Pan’s Still Got It

Almost every visitor to Greenpoint has one specific stop: Peter Pan Donuts. The Manhattan Avenue shop is literally one of our claims to fame even without Tina Fey’s affections. There have been documentaries and shorts made about it. Their doughnuts have appeared on lists from here to Japan. Their summer ice cream sandwiches are things of beauty. And best of all, the price has still remained $1.10 for one doughnut, with a filling breakfast or lunch for under $10. As someone who lived around the corner for seven years, I frequently stopped by for a hangover breakfast or mid-afternoon pick-me-up (yes, doughnuts are snacks in my world). I’d noticed over the past couple of years, new flavors began appearing on their hallowed shelves, and they were definitely worth noting. END_OF_DOCUMENT_TOKEN_TO_BE_REPLACED

I Tried Paczki and You Can Too (only today!!!)

Today, February 27th, is Fat Thursday (Tłusty czwartek) and according to Polish-American tradition, it’s the one day a year that every bakery and pastry shop in town sell Paczki (pronounced “poch-key”). The desert is meant to be eaten the week before Ash Wednesday, a binge snack before the fast of Lent. I asked the Polish waitresses at Peter Pan why this is and they answered simply, “tradition.”  The girls explained that Paczki is eaten all year ’round in the home country, but this is the only day you can get it here. You have until 8pm tonight, or you’ll have to wait until next year.

So run, don’t walk to your nearest Polski food provider; most likely, they will be selling these doughy nuggets of joy today.  END_OF_DOCUMENT_TOKEN_TO_BE_REPLACED

Transportation Alternatives is advocating for increased awareness from drivers to cut down on accidents on dangerous intersections, like McGuinness and Nassau by lowering speed limits to 20 mph (which statistically lessens the likelihood of pedestrian fatalities).  Here’s to hoping. END_OF_DOCUMENT_TOKEN_TO_BE_REPLACED 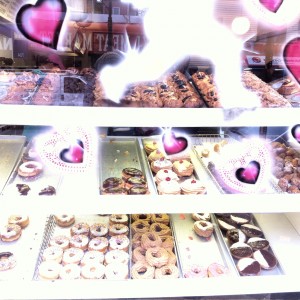 A few months ago I purchased this doughnut map that features 35 of the best places to get a doughnut in New York City. It was the best $10 I’ve ever spent. Since receiving the map, I’ve been traveling throughout the boroughs eating a shit-ton of donuts and probably gaining a few pounds, but whatever. I’m having the time of my life.

Yesterday I went to #1 on the map, Peter Pan Bakery (on Manhattan between Norman and Meserole). I had never been before. Why? Because I’m out of my goddamn mind, that’s why. The place is a 10-minute walk from my apartment and serves some of the most delicious doughnuts I’ve ever tasted, and I promise you, I’ve tasted plenty.

Are you aware that they have a doughnut with frosting and red velvet cake crumbled ON TOP of the doughnut?

Are you also aware that their donuts are only $1? And the more you buy, the less they cost? Ten donuts, for instance, costs $8 and change. THAT’S IT. 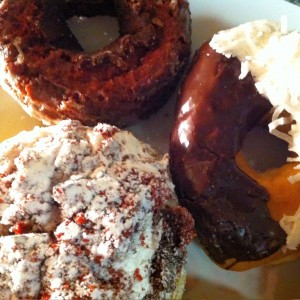 I was so overwhelmed by the variety of donuts and scent of sweets that I started convulsing. It wasn’t the cold air outside. It was the ‘nuts, man. This place is no joke. No wonder Tina Fey once said she wanted to violate them.

If you live in Greenpoint, please don’t make the same mistake I did. Get off your ass, head to Peter Pan and go get a doughnut….or seven. I bought seven. YOLO. 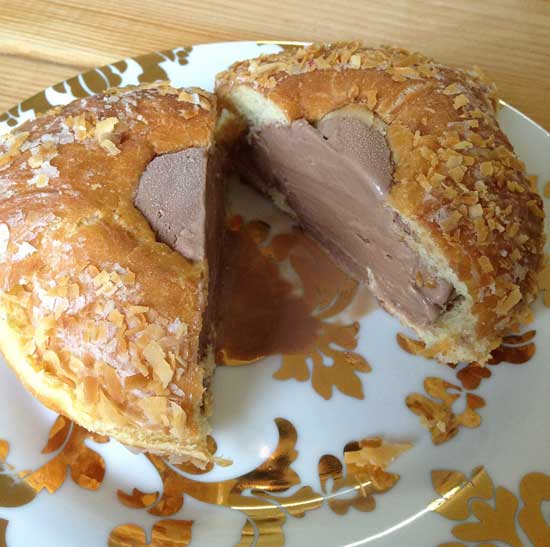 It’s something I’d heard rumors about for years, but never knew if it actually existed. Finally, this summer a hand drawn sign appeared in the window of Greenpoint’s own Peter Pan Donut Shop (727 Manhattan Ave.) – advertising the great white whale of summer desserts: the Ice Cream Donut Sandwich. It sounded like a joke. A donut of your choice cut in half and stuffed with a large scoop of Haagan Dazs ice cream. I can confirm that not only is it real, but it’s delicious. END_OF_DOCUMENT_TOKEN_TO_BE_REPLACED