Many artists’ studios feel like a cluttered curation, and sometimes they can be intimidatingly bohemian, but George Underwood’s creative haven in Greenpoint is surprisingly tidy and welcoming. The large prints on the walls and huge projector screen above, accompanied by a few audience seated chairs below compliments the fact that he is a devoted and driven photographer who is passionate about his work. Underwood, 30, views photography as more than just a hobby, but as a way to document modern day interactions in a fast-paced society. Being an only child of a single mother, he spent his alone time quietly observing places and people in his town, which sparked a love of photography through stilling those moments in time as an outside observer. From George’s own lens, literally and figuratively speaking, he captures how people interact with a space and with each other, surrounded by the technology ever so present in their lives. END_OF_DOCUMENT_TOKEN_TO_BE_REPLACED 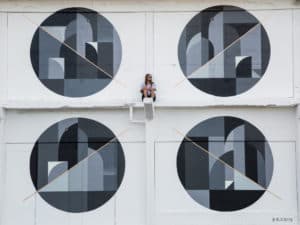 END_OF_DOCUMENT_TOKEN_TO_BE_REPLACED

GOS had a record-setting 350 artists open their studios to thousands of visitors. But don’t take my word for it, check out Instagram’s #GreenpointOpenStudios. END_OF_DOCUMENT_TOKEN_TO_BE_REPLACED

Give the Gift of Original Art at CALICORNUCOPIA 4!

It’s the holidays and if you stayed clear of the madness of black Friday and cyber Monday, you might still have a pile of people you need to buy gifts for. Or maybe it’s just time to treat yo’ self! Toasters and electronics are boring. Give and get some original art!

In its fourth installment, Calico Brooklyn has put together CALICORNUCOPIA, a Holiday exhibition of works by local artists priced at $300 or less. On opening night, I picked up a drawing “The Crush” ($80)  by Mike Hambouz, a gnome laser cut magnet ($40) by Adam Puryear, and a QR code ceramic ornament ($35) by Robert Raphael & Lauren Houston. END_OF_DOCUMENT_TOKEN_TO_BE_REPLACED

Between the Real and Virtual: UNCANNY Explores 3D at REVERSE

Remember Second Life? It’s a platform that gives users the ability to create 3D virtual spaces and interact with one another as avatars. When I first dabbled with it, I was drawn to the numerous possibilities. I imagined a new kind of online shopping where instead of looking at lists and product images, my avatar would walk down an aisle full of items and bump into other shoppers along the way. I created an account and explored various “worlds”. I attended a political debate. Then one night, I dressed up and went to a virtual beach club. The landscape was beautiful and the music was good. I “danced” for about 15 minutes before I realized the reality of the situation – that I was in my PJs sitting in my bedroom furiously tapping the CTRL key on a Friday night.

But does that make the experience less “real”? I met people from around the world in a space that inspired the imagination and I took the time to create the movements and image of an avatar. Self-expression plus interaction, however digital, was present and was arguably less inhibited by the limits of physical space. Through the work of five artists, this notion of “immersive experiences that oscillate between real and virtual space” is explored in REVERSE gallery’s UNCANNY, a group show about 3D virtual environments (28 Frost St). END_OF_DOCUMENT_TOKEN_TO_BE_REPLACED