Between the Real and Virtual: UNCANNY Explores 3D at REVERSE 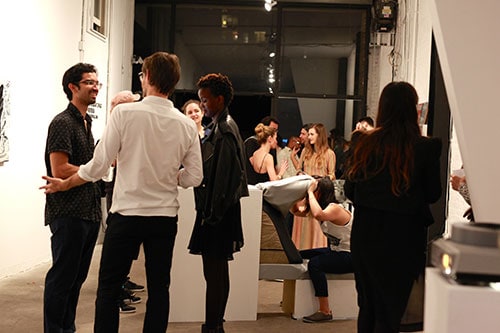 Remember Second Life? It’s a platform that gives users the ability to create 3D virtual spaces and interact with one another as avatars. When I first dabbled with it, I was drawn to the numerous possibilities. I imagined a new kind of online shopping where instead of looking at lists and product images, my avatar would walk down an aisle full of items and bump into other shoppers along the way. I created an account and explored various “worlds”. I attended a political debate. Then one night, I dressed up and went to a virtual beach club. The landscape was beautiful and the music was good. I “danced” for about 15 minutes before I realized the reality of the situation – that I was in my PJs sitting in my bedroom furiously tapping the CTRL key on a Friday night.

But does that make the experience less “real”? I met people from around the world in a space that inspired the imagination and I took the time to create the movements and image of an avatar. Self-expression plus interaction, however digital, was present and was arguably less inhibited by the limits of physical space. Through the work of five artists, this notion of “immersive experiences that oscillate between real and virtual space” is explored in REVERSE gallery’s UNCANNY, a group show about 3D virtual environments (28 Frost St). 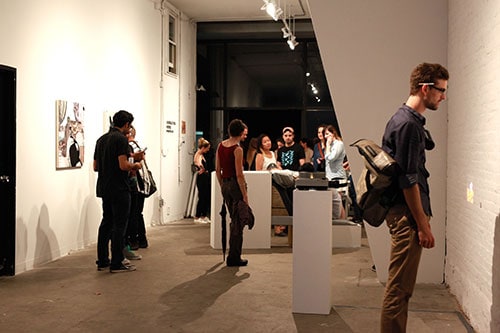 On opening night, I walked over to a lively crowd spilling out onto Frost street. Inside, there was a merry mix of minglers as well as lone visitors amongst the art. After boozing up a bit, I stumbled upon RandomAccessData, Eva Papamargariti’s “dialectical narration between visual and verbal references that explores the role of search engines and tagging in cyberspace.” Via headphones, I listened to a cacophony of unstructured tags while a psychedelic flow of images unfolded before me. It was like a digital visual and auditory version of Leopold Bloom’s stream of consciousness, and I felt dragged through some seemingly chaotic thoughts. In the end though, the disparate elements are weaved together through the common themes of “distribution and reproduction of images, data flow…and real identities versus digital identities in cyberspace.”

Alien ship could work as an antithesis to RandomAccessData in that the animation and accompanying sound was on some level soothing, but not quite. In line with the show’s namesake, Giselle Zatonyl’s work imitates reality enough to reach the point of the “uncanny valley,” effectively drawing a sense of unease. It reminded me of a Thailand seascape with jagged rock formations but in this digital rendition, there was something eerie about the sculptural entity that merged in and out of the water.

In a short conversation with Alfredo Salazar-Caro, I learned that Triptych AKA Miami Booty Bass revisits earlier motifs of power and mysticism and brings contemporary elements to it. The three animated portraits in triptych form is an homage to early Christian art and displays imagery like church steeples alongside USB drives. It’s a conversation between two different times of old world religious iconography and iconography now.

81 Points of View (Autoplay) by Sebastian Schmieg is perhaps a conversation between obsolete technology and modern devices. A “media-archaeological sculpture… where as media technology becomes smaller and eventually invisible… the sculpture’s mode of operation turns out to be the actual subject matter.” Indeed, the carousel slide projector took center stage here more than the projection, especially as the “transparent set-up” was missing on opening night. The reality of technical difficulties. 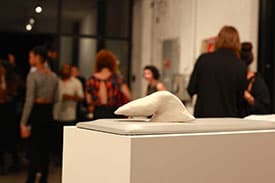 Leo Castañeda described Item 93201 as a dialogue between painting, sculpture, and virtual reality. He flexed some mixed media muscle in this installation, having his paintings in the physical space as well as his sculpture encasing a virtual space that he rendered digitally. You peer into it through a VR headset and encounter objects like the sculpture itself and the painting that is hanging in the gallery. You might re-evaluate where the self is and ask: what came first? Are the paintings derived from the virtual world? Or is the virtual derived from the painting? You may wonder whether you are a man dreaming you are a butterfly, or whether you are a butterfly dreaming you are a man.

In UNCANNY, you veer between the realm of actual space and virtual space, time is stretched, and you encounter the kind of artistic geekery that I can’t help but find appealing.

UNCANNY is curated by Helena Acosta and is on view until tomorrow (Saturday 9/26). As part of the exhibition programming, Alfredo Salazar-Caro will be teaching an Intro to VR and Video Games workshop (9/26 and 9/27) at REVERSE (28 Frost St). REVERSE gallery is open Wednesday through Saturday from 1:00 pm to 7:00 pm or you can make an appointment by emailing [email protected]