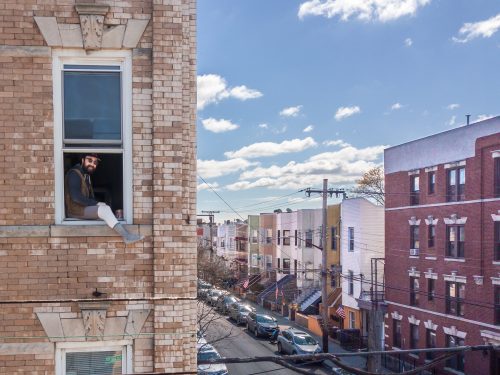 Waiting out the pandemic, photographer Johnny Cirillo has spent recent weeks indoors along with the rest of his fellow Greenpoint neighbors adhering to social distancing guidelines.

His new photo series captures friends in their quarantined state from their apartment windows, balconies and fire escapes.

While his projects such as the weekly Fashion Sundae photo series on the Greenpointers website are on hold, Cirillo has started to film drone videos (much to the excitement of his son Cassius) of Buzz Lightyear making sure all is well in the area, which served as inspiration for the portrait series.

Apparently Greenpoint hired a space ranger to watch over the neighborhood and make sure you STAY INSIDE! He has a laser if you think about being funny and hanging around

“While I was flying Buzz, one of my friends came out from the third floor on his balcony and I took his portrait. When I showed it to my wife, she thought it was awesome,” he said.

Initially reaching out to local families, Cirillo said he found most had temporarily decamped from Greenpoint: “If I reached out to 20 families, 15 had left,” he said.

From there, Cirillo contacted friends who live on the upper floors of their buildings, capturing the excitement, or lack there of, of life on pause.

More neighbors and friends have since reached out to have their quarantine portraits taken, and Cirillo says he would like to continue the series. For those interested, he recommends sending a message on Instagram: