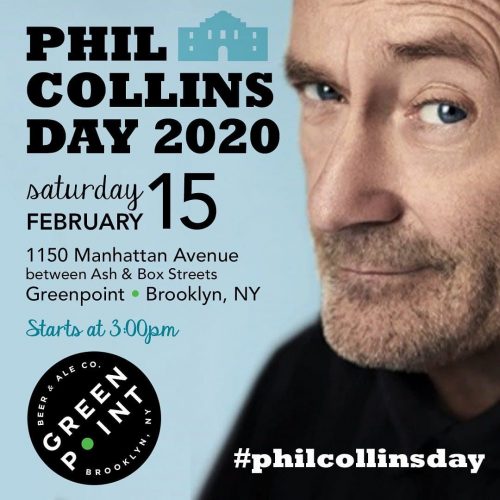 The event seemed to have reached its apex in 2011 when a full-fledged parade processioned through the streets of Greenpoint featuring a marching band playing instrumental versions of Collins’ hits.

In recent years there has been a PCD drought, but an anonymous and locally famous driver dubbed “Phil Collins Guy” has circled the neighborhood blasting at window-shaking-volumes the timeless Collins hit “In The Air Tonight,” helping to keep the collective admiration of the former Genesis singer a local topic of discussion.

“I remembered the event from years ago and I was talking with my friends about it last spring,” says Steve Holland who progressed from reminiscing about the day to actively working to bring back this year.

Holland, a Greenpoint resident and organizer behind this year’s celebration, and he reached out to the original PCD promoter, Heather, (who has since moved away from NYC) in order to receive her blessings for the 2020 edition of PCD.

A rep from Collins’ Rhino Records label reached out to Greenpointers following an initial post on Instagram announcing PCD, and the label provided vinyl records, box sets and other merch for a raffle. All proceeds from the raffle will go to Collins’ charity the Little Dreams Foundation.

The event this Saturday is free and open to the public and there will be live music to help everyone sing along to their favorite Phil Collins tunes.

Although Holland doesn’t know the identity of Phil Collins Guy, he says that the local legend is surely invited to help celebrate on Saturday.