VF: They are, but we do everything out of this space.

VF: We’re always farm-to-table, as far as catering goes, and there is definitely a Mediterranean influence, like we have here at Pheasant. But ultimately catering is about what people want — some people want Asian food for their catering, and we can do that. It depends on who the client is. The core part of the catering business is on-set catering, a lot of photoshoots, for breakfast and lunch. That’s why it works with the restaurant — Little Pheasant is here at 4:30 in the morning and out by noon, and then our Pheasant cooks come in. It’s constantly running. Little Pheasant also does events at night — weddings, all that kind of stuff — but that only makes up about 20% of the catering business.

GP: How about your pre-Isa days, how did you end up there?

VF: Originally I’m Canadian, born and raised in Vancouver. There, I kind of did the classic route. I did an apprenticeship at a restaurant 21 years ago, so I’m classically French trained. I worked in restaurants around Vancouver and then I took a little break, moved to French Polynesia. My father’s French, so I’m half French — my whole family is in France, really, I don’t really have a lot of family in Canada. I spent a lot of my summers on my grandparent’s farm in France. Because I have a French passport, I was able to go to French Polynesia and work.

After that I worked a lot on private yachts, so I traveled around the world a little bit, cooking for the rich and famous, whatever.

GP: Anybody notable that you’re allowed to talk about?

Anyway, I took the money I had saved working on the yachts and I bought a little restaurant in a small town called Tofino on Vancouver Island. I lived there for four and a half, five years, before I came here on vacation to see some friends. I met my wife-to-be [now wife, Cat Alexander], fell in love, sold the restaurant, and moved here right away.

I needed a sponsor and a friend of ours worked at Isa, and I got a sponsorship through the restaurant.

GP: What was your intent opening Pheasant?

We wanted to have a nice neighborhood restaurant with a non-pretentious setting, but with good food. Ethical, happy, feel-good-about-what-we’re-doing food.

VF: The sourcing of our products, and generally making sure that we take care in everything we do. Cat with the wines [Pheasant maintains an extensive list of natural wines, curated by Alexander], me sourcing our ingredients, and all that kind of stuff.

But also trying to sell it at a value. Which is not easy, you know, but we try. That was what we wanted to do, and here we are two and a half years later.

GP: If you had to reduce the entire ethos or philosophy down to one or a couple words…

VF: I think its coastal Mediterranean food sourced in a local, sustainable manner.

GP: Ok, so, I’m glad you brought up “Mediterranean”. That encompasses a huge —

GP: So many things. I wanted to ask about that, was that conscious?

VF: It was on purpose. Now, one day if I want to put a Greek dish on the menu, I can. If I want to do a Moroccan or an Italian dish… I can kind of run the gamut. It gives us a broad area to pick from.

But also we have a burger with kielbasa on it, because Greenpoint is right next door and there’s really good kielbasa, so why not, right? When you open a restaurant, you have to have some kind of vision or direction, and so we thought we would paint a broad stroke so we’d be able to kind of blur the lines a little bit if we needed.

GP: And it seems like you’ve done exactly that, blurred the lines.

VF: Yes, very much so. Especially now. In the beginning, I was really strict about it, but now — as it goes, I feel like we’re more of a European instead of strictly a Mediterranean. But the design of it and everything is still Mediterranean.

Then there are other dishes that we bring back every year, like the endive salad on the menu right now — that’ll always come back every winter because people love it, but I’m not going to serve citrus and endive in March, that just doesn’t make any sense.

So yes, its seasonal, but its half and half, because I still want to have those staples for everybody, our regulars who come in once a week.

GP: Is there a dish that you’re most excited about or proud or right now?

VF: I’m really excited about the new carrot dish, but I also really like our go-to dish, our most popular dish that outsells everything, which is the octopus. I’m really proud of that one, it’ll never come off the menu.

VF: I don’t. I really just try to stay with honest food that I grew up eating. It’s classic, there’s nothing that’s going to be weird that’s unapproachable on the menu. I feel like that’s important. Fads come and go, but good, solid, honest food is going to be around for a while.

GP: And what, exactly, is natural wine?

GP: Earlier I asked Chef Vince which wines he’s pair with his new carrot dish and the octopus, and he directed me to you.

LS: With the carrots I’d suggest the Orsi Vigneto San Vito. It’s more of a cold weather white wine that goes nicely with the carrots. The Orsi has a little heft and character, and eventually some floral notes, that go well with the warm spices of the carrots.

For the octopus, I would go with the Villa Calicantus, which is a medium bodied red blend that has a little bit of a kick at the beginning, sometimes a slight effervescence, and some funkiness. I would either do that or the Cantina Margo, which is a pretty full-bodied orange wine. 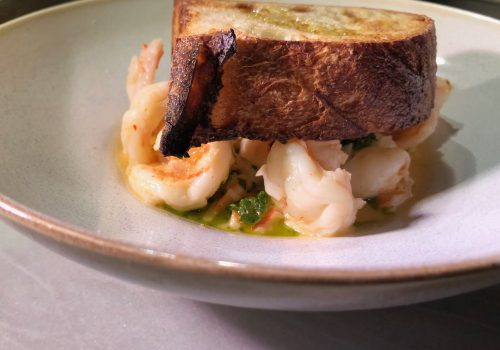 Pinch of dried round Calabrian chilies

Chunk of bread, toasted (we use the sourdough rye from Bakeri)