When you speak to anyone who was a Dodger fan you feel their love for the team and the wound they felt when the team left for Los Angeles. The Dodgers left Brooklyn in 1957 and many die-hard fans could never come to terms with their departure. Part of the mystique of the Dodgers was a legendary local band that helped create an unrivaled and unforgettable part of being at the ballpark: the Sym-Phony band. Old Dodger fans recall that Ebbets Field had a unique character, packed every day with the most enthusiastic and loyal fans a team could have. One of the most cherished sights and sounds in those games was a group of rather poor musicians from Greenpoint and Williamsburg. They called themselves the Sym- PHONY (accent on the last two syllables!) to differentiate themselves from professional musicians, but despite their missed notes, they were a loved feature at Dodger games.

Lets digress for a moment and talk about why the Dodgers were so loved locally. The Dodgers were for many years little better than an average team, but Brooklyn loved them with a passion that is hard to describe. They were affectionately called “Our Bums,” because they could never seem to win a championship, but they had a passionate, even fanatical local following.

During the Dodgers, Brooklyn years played the players were not millionaires like today’s stars. Many of them had to work in the off-season to make ends meet. The players lived in the community, shopping in local stores and praying in local houses of worship just like everyone else. Part of the love that people in the community had for them was their ordinariness.
We bought our house from Vic La Magna who grew up in Greenpoint and worshipped the Dodgers. LaMagna and a large group of Greenpoint boys would often ride their bikes to games Ebbets field in Crown Heights to watch the Dodgers, but the real thrill was waiting until after the game to see the players appear. The players in those years felt that it was a privilege to be paid to play a kids’ game and they had to give back to the community. The Dodgers would not only sign autographs but would talk to the kids, offering them suggestions on how to master the finer points of the game. They might stay a half-hour to forty-five minutes, never letting a young fan leave without an autograph. 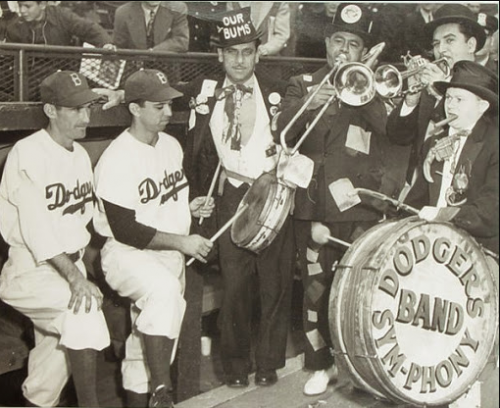 According to Lou Dallojacono, one of the band’s members, the sym-PHONY appeared at Ebbets fields every day from 1939 until the Dodgers left in ’57, he told Street Play:

The first year they wouldn’t let us in with our instruments, but we found ways of getting around it,” said Lou. “The first guy would pay and go in. He’d then throw down some twine and hoist the instruments one at a time up into the stands.”

“When Branch Rickey took over, he saw how popular we were and began to let us in for free. He gave us our own row in section 8 (affectionately known as the “loco section”). There about 10 of us in the band and we’d rotate depending on the time of the game and who worked nights or days. We had a bass drum, cymbals, trumpet, sax, sometimes a trombone. The crowd loved us.

We’d do what we could to rattle up the other team and have some fun. We’d play our little ditties, start-up chants or make some funny sounds with those instruments. We had a whole repertoire of songs too. We’d start with Take me out to the ball game. When our pitcher was taken out we’d play, Who’s Sorry Now or Somebody Else is Taking My Place. When one of our guys got a base on balls, we’d break into would you like to take a walk.
We had a whole bunch of songs and routines, but I think we’re best known for the song we always played for the umps, “Three Blind Mice.”

Years later, Jackie Robinson’s widow Rachel Robinson recalled the sym-PHONY in the NY Times. “The Sym-Phony was one of the things people loved about Ebbets Field,” Mrs. Robinson said. “They provided a kind a special character and loving warmth that few other ballparks had, so I’d recognize them anywhere.”

Sym- PHONY was one of the first bands to play for a professional baseball team,  if not the first. Today, many ballparks have paid musicians who try to enliven the crowd- a legacy to those off-key musicians from our area. The last of the band members Armand Soriano passed away in 2015, but he and the other band members have become part of the Dodger lore and baseball history.