Williamsburg Civil War hero and bare-knuckle fighter Sam Collyer won both the Medal of Honor and a lightweight world championship in the days after the War Between the States, but Collyer was a puncher and not a boxer. He won a few title defenses in the 1860s, but was later embarrassed in the ring by perhaps the greatest local fighter, McAuliffe in an 1888 match staged in a local theater, in which McAuliffe humiliated the former champ with his technical boxing prowess. 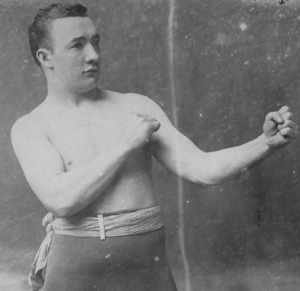 McAuliffe began as a cooper making barrels for the local sugar industry and sat at the same bench as another local boxing legend Jack “The Non-Pareil” Dempsey. The two Irish-born Williamsburgers became friends and sparred together while mastering the art of boxing. Dempsey became the first undisputed world Middleweight Champion in 1884, but he would not live long, dying of consumption at age thirty-two, but like his friend McAuliffe was inducted into the boxing hall of fame. McAuliffe would become one of seven fighters who was never defeated in the ring.

Five years later in 1889, Greenpoint heavyweight Jake Kilrain would lose in one of the epic battles in boxing history to legendary John L. Sullivan. The illegal bout fought outside in almost a hundred degrees of heat was the last bare knuckle heavyweight championship and no boxing match in American history had ever created so much excitement. Newspapers around the country carried stories about the two fighters for months.

The fighters fought under London Rules, something like mixed martial arts, which allowed the fighters to throw one another, adding elements of wrestling. The smaller Kilrain took a savage beating from Sullivan for over two hours until in the seventy-sixth round his seconds fearing Kilrain would die threw in the towel ending the fight and probably saving the Greenpoint fighter’s life, much to the anger of Kilrain who would later be inducted into the boxing hall of fame like McAuliffe and Dempsey. 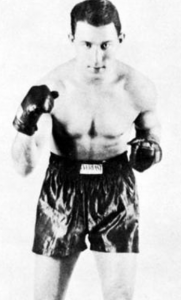 In the 1930s Williamsburg born Jewish scrapper Solly Krieger also won the world middleweight championship. On October 22, 1936, he won a brutal twelve round match against Oscar Rankins in Pittsburgh. People marveled at the beating Krieger was able to withstand and still keep fighting.

Krieger fought three bouts against the legendary Billie Conn, the world light heavyweight champion, winning his first, but losing his final two and his boxing crown. In the 1940s Conn said of Krieger, “This guy Krieger was the toughest…I ever fought. I ached for a week after my first fight with him. He could lick anything around now.”

Kownacki is still a long way from approaching the greatness of some of the local legends in boxing, but it is exciting to watch a local boxer awaken the great local boxing legacy North Brooklyn treasures.