Greenpoint’s Quirky Lunch Combo: Get a Massage and a Meal at the Same Time 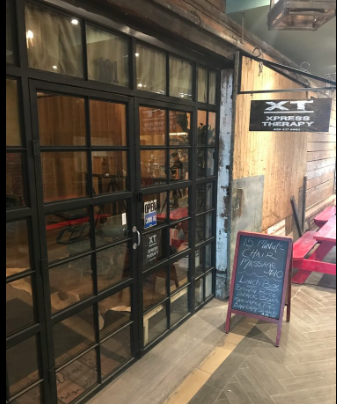 Much has been written about the power of taking a break. But the hustle and bustle of our daily lives often makes escaping (literally or even figuratively) difficult. Xpress Therapy (67 West St.) has introduced a solution—a spa, nestled amongst startups and art studios, with the goal of providing serenity and sustenance (yes, there’s food). And it can be done swiftly, if that’s the only time you’ve got.

But as you’ll quickly discover, this spot, which opened in December, is more than a place to get a peaceful nosh. You’re supporting Nestor Cora, a man of many titles: former Olympic basketball player, musician, masseur, and businessman with the pure and simple goal of “wanting to cater to the people that have jobs here.”

Step in to Xpress and get a 15-minute chair massage ($10) along with a delicious and healthy, freshly cooked lunch box to go ($8). There are a handful of other massages of various length and styles on offer (e.g., foot massage, hot stone, sports massage). The meal is hand cooked by owner and sole employee Nestor and inspired by the famed Angelica Kitchen in the East Village, which closed last year. “I offer a lunch box every day… I saw there was no place to eat in the building and I figured I could offer something. It’s a vegan dish but you don’t have be vegan to eat it,” he says.

So how and why does someone go from dribble and shoot on an international stage to rest and reboot in Greenpoint? After playing basketball with the Puerto Rican Olympic team in the 80’s he decided to call it quits. “My body had had enough,” he recalls honestly. He got a gig as a courier, but then after an injury and trying out his innate massage technique on friends and family he enrolled in the Swedish Institute of Massage.

With a degree in hand, he opened a studio in Chelsea and then most recently one in Williamsburg, where he got some notoriety in the NY Post for the scale of his operation. He offered massage, facials, events (yoga, poetry readings, music) and meals. However, Nestor admits he overextended himself with the big studio and perhaps had too lofty a goal, so Earth Wellness closed its doors in 2015. Xpress Therapy is a fraction of the size of the Williamsburg studio and, as of now, open for appointment only.

Throughout his career, he’s also been channeling his creative side with music. Last year his song “Summer of Hell” about the transit issues got picked up on Pix 11.  He continues to make music as a singer and songwriter, right now working on a piece titled “The Whole Damn World’s Gone Crazy.”

For Nestor his path wasn’t linear, but this confluence of experiences has helped him create this unique offering. “I feel I have the knowledge to help make people feel better. And that’s a powerful feeling,” he says.

Nestor doesn’t push his background or agenda on spa-goers. He doesn’t play his own music or give out brochures, recognizing the insecurities that often come with a massage. He notes, “massage can be intimate and invasive but a short conversation can break the ice and remove the vulnerability … I didn’t try to design my place for people, I designed it for comfort.”