Lately, one of the hottest tickets in Greenpoint is to the series of dinners being hosted by The Wild Honey Pie. The monthly event, which began last year, starts with a three-course dinner before a small set by an up-and-coming artist. The dinner party has been held at several locations around the neighborhood including Archestratus Books + Food on Huron Street. Needing to find a bigger space that can accommodate more guests and equipment, they’ve moved over to Le Fanfare (1103 Manhattan Ave). That’s where this month’s dinner will be held on the 24th with the local band Future Generations.

It also happens to be where last month’s dinner happened when the guest musicians were Wilder Maker. In need of a nice pre-Christmas night out, I checked it out with a neighborhood friend. As with the dinner on the 24th, $40 gets you everything you could need. 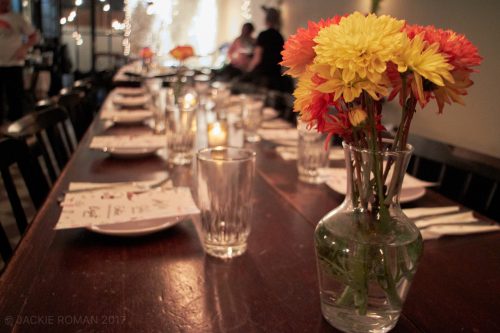 The family-style dinner was kicked off with a healthy beet and greens salad that was followed up by copious amounts of perfectly al dente trofie pasta in kale-based pesto. Keeping it to vegetables and pasta means getting a nice break from those comforting hearty winter meals you seek out during cold snaps, plus the vegetarians among us don’t have to feel left out. To end the meal, we were all served individual cups of airy tiramisu. The guests do get unlimited Brooklyn Brewery beer, but the bar is still serving. I went with a glass of dry sparkling rosé while my friend chose one of Le Fanfare’s cocktails and both went well with the dinner. 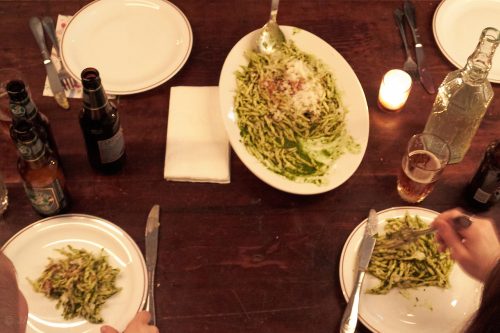 But the food is only half of the dinner. Most of the seating is communal, so if you’re a person looking to meet a few new friendly faces or an extrovert who thrives in these situations, you’d definitely be a welcome addition. Most of the attendees were other couples or friends, but there were a few solo diners so you wouldn’t feel entirely out of place. There are also a few four-tops and two-tops available, which is especially great to snag if you’re a couple on date night or attending with a group of friends. 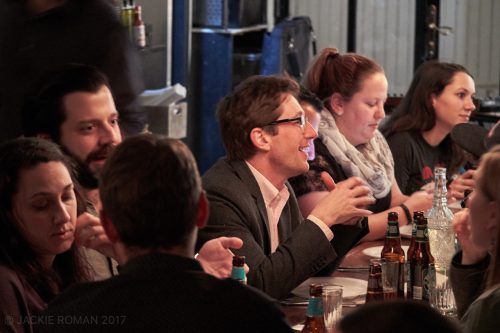 Once dinner is wrapping up around 9 o’clock, it’s time for the show to begin. If you’ve never been to Le Fanfare, they have a little space at the back of the restaurant perfectly set up for performances. With no bad seat in the house, everyone gets to sit back and enjoy the show with their dessert and/or après-dinner drink. As one of the leading sites for discovering new artists, you can thoroughly trust The Wild Honey Pie to chose artists with a wide appeal. Future Generations’ debut album was called “a joyous celebration of guitar rock meets electro-pop” by The Deli while Baeble Music compared “Eddie Gore’s pop-tinged vocal” to indie pop classics MGMT and Foster the People. Tickets just went on sale for this next dinner and it will sell out, so you’ll want to get yours now.

Added bonus event: If you’re really into live music, camping, and The Berkshires, The Wild Honey Pie recently released tickets for their sixth annual music festival, Welcome Campers. Happening over Memorial Day weekend, they take care of everything including arranging a bus with pick up/drop off at McCarren. $200 early bird tickets are on sale right now, but there are only 50 available, so get on it!