You can search for landmarks by category, address or area; by style, architect, building type or era of construction. I popped in Greenpoint, and discovered we have 10 designations, including individual landmarks and historic districts. So without further ado, I give you, The Hist List: Every Historic Landmark in Greenpoint! 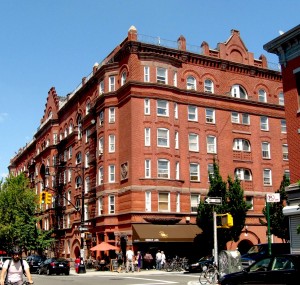 Let’s take it from the top. The northernmost designation lands on the Astral Apartments (184 Franklin Street). Charles Pratt’s 19th century workers’ housing earned landmark status in 1983. Local Historian and Greenpointers contributor Geoff Cobb gives the rousing history of the complex in his series, A History of Greenpoint in 25 Buildings, and the Landmarks Commission concludes in its designation report that, “the Astral Apartments is one of the most important 19th-century apartment houses in New York City; that is is one of the earliest model housing projects designed for the working class; that many of its features were a radical departure from then contemporary standards for workers’ housing and represent a significant step in the development of the American housing movement; that it was built by Charles Pratt, one of Brooklyn’s wealthiest citizens and perhaps its greatest philanthropist; that it was designed by the notable architectural firm of Lamb & Rich; and that it is a handsome and skillful rendering of the Queen Anne Style.” 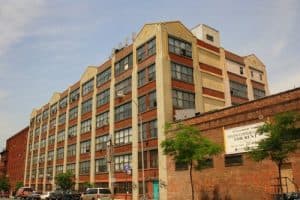 Home, Sweet Home! The Greenpointers office is located in the Pencil Factory, and much ink (or graphite?) has been spilled on this site over the history of the building (47-61 Greenpoint Avenue), and its surrounding historic district, which is celebrating 10 years as a landmark. While buildings in the district date to 1860, the Pencil Factory opened in 1924 and introduced the world to colored pencils. The Landmarks commission found, in part, that buildings in the district “provide a concise history of the development of industrial architecture in Brooklyn, as well as the company’s rise to national prominence; and that the intact and cohesive streetscapes provide the Eberhard Faber Pencil Company Historic District with a special sense of place.” 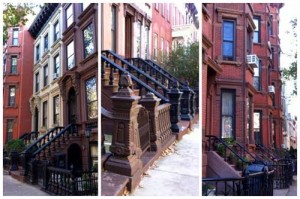 The Greenpoint Historic District, landmarked 1982, includes property on Java, Franklin, Kent, Milton, Noble, Calyer, Leonard, Oak, Guernsey and Lorimer Streets as well as on Greenpoint and Manhattan Avenues and on Clifford Place. The development of the area began in 1832 when  Neziah Bliss acquired land in Greenpoint and brought ship building to the neighborhood. In the 1850s, ship building became one of the most prominent industries in Brooklyn, and Greenpoint was the epicenter of the trade. The neighborhood grew along with the ship building industry, so that most of the homes in what is now the Historic District were built by and for the men working in that trade.

Greenpoint’s historic district differs from others is Brooklyn because it is linked to the industrial development of the neighborhood. In fact, the Designation Report notes that Greenpoint’s ship builders “built much of this country’s nineteenth-century merchant navy and ships for many foreign countries.” Further, as Greenpoint grew to become Brooklyn’s industrial center, “residents of the area contributed to the evolution of American fine arts,” and that they built their own homes in a variety of “vernacular styles” that reflects the “diverse nature” of 19th century urban architecture. 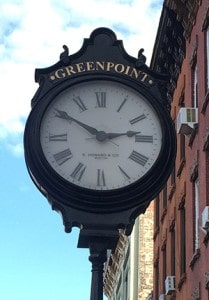 The towering timepiece at 753 Manhattan Avenue was landmarked in 1981. The LPC asserts that “one of the most important and essential parts of New York’s historical fabric is its ‘street furniture’ — lamp posts, street clocks, sign posts , and benches that enhance and maintain the intimacy and scale of neighborhood blocks.” Our streets have no finer pieces of furniture than imposing cast-iron sidewalk clocks, and the one on Manhattan Avenue is the last one standing in Brooklyn! Introduced in the 1860s, sidewalk clocks like this one were a popular form of advertising. Longstanding businesses would buy a clock and install it in front of their shops. This clock once advertised Bomelstein Jewelers. Today, the clock is named for its home, sporting a spiffy “Greenpoint” along the top. 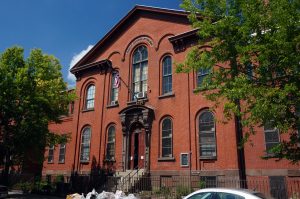 PS 34 (131 Norman Avenue) is the oldest continuously functional primary school in Brooklyn! The building, landmarked in 1983, was built in the Romanesque style in 1867, and designed by Samuel B. Leonard, Superintendent of Buildings for the Board of Education in Brooklyn 1859-1879. Additions were added in 1887-1888, by  James W. Naughton, who succeeded Leonard in his post. Together, the two men designed every public school in Brooklyn built between 1855, when the Brooklyn annexed Bushwick, Williamsburg and Greenpoint to become the third largest city in the country, and 1898, when Brooklyn became part of New York City.

The Pavilion in McGolrick Park, bounded by Monitor and Russell street, and Nassau and Driggs Avenue, is the elder statesman of Greenpoint landmarks, having earned that status in 1966. The Landmarks Commission was so taken with the Pavilion, it notes that the structure, “reminds us of the Grand Trianon at Versailles with its coupled columns and the arrangement of windows in the end pavilions.” Who among us has not felt like royalty in McGolrick Park?! Though the structure itself was built in 1910, it seems that the association with the French Aristocracy does not end there. The report goes on to say, “This park shelter is of particular significance as it represents a piece of architecture which virtually controls the landscape…this type of radial landscaping as determined by the form of the building is typically French and rarely encountered in America.” 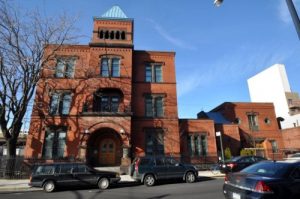 If you got mixed up with the law in 19th century Brooklyn, the 19th Police Precinct Station House and Stable (43 Herbert Street) is a prime example of where you would have been sent. The building, built 1891-92, landmarked 1993, is a “well-preserved example of the finely-detailed Romanesque Revival police precinct complexes that established a characteristic public presence in the neighborhoods of Brooklyn in the late nineteenth century.” 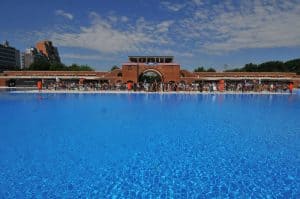 Enter the Power Broker. As Parks Commissioner under Mayor Fiorello Laguardia, Robert Moses built 11 public pool complexes across the 5 Boroughs, all but one opened in 1936. The McCarren Park Play Center (776 Lorimer Street) is the largest of them all!!! The complex, landmarked in 2007, was built with WPA labor under the auspices of New Deal legislation which promised to raise the national standard of living. Offering a relief from the heat of a New York summer, and a place for recreation, the McCarren Park Play Center stood out as a special amenity in Greenpoint and Williamsburg, which were both deeply underserved neighborhoods at the time. 1936 was dubbed the Summer of Pools in New York City, as a new one opened every week. The opening ceremonies “featured parades, blessings of the waters, swimming races, diving competitions, appearances by Olympic stars, and performances by swimming clowns.” A crowd of 75,000 turned out July 31, 1936 to celebrate to opening of the McCarren Park pool. Despite all this revelry, the history of Moses’s pools is a fraught one. The complexes, ostensively for the public, began as largely segregated spaces, used predominantly by white New Yorkers.

Regarding the need for municipal pools, Moses told the New York Times in 1934, “It is one of the tragedies of New York life, and a monument to past indifference, waste, selfishness and stupid planning, that the magnificent natural boundary waters of the city have been in large measure destroyed for recreational purposes by haphazard industrial and commercial developments, and by pollution through sewage, trade and other waste… We must frankly recognize the conditions as they are and make our plans accordingly.” Soberingly, Greenpoint and Williamsburg still suffer from pollution (some of it produced by Robert Moses’ idea to extend the BQE through Williamsburg). In the summer of 1936, the Commissioner’s solution was a public pool. Moses was an avid swimmer, and gave special attention to the pool project as a whole. The Landmarks Commission places the 11 pools “among the most remarkable public facilities ever constructed in the country.” 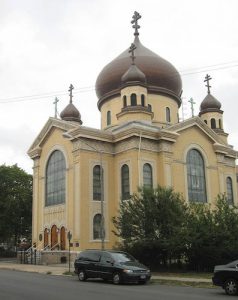 Russian Orthodox Cathedral of the Transfiguration of Our Lord

Cutting a distinctive profile at 228 North 12th Street, the Russian Orthodox Cathedral of the Transfiguration of Our Lord was begun in 1916, completed in 1921, and landmarked in 1969. In a remarkably succinct, one page, designation report the landmarks commission found that the church “is an outstanding example of an early twentieth century church executed in a Russian version of the Byzantine style, that it is well sited and monumental in scale, and that with its onion—shaped domes silhouetted against the sky, it adds drama and color to the local scene.” 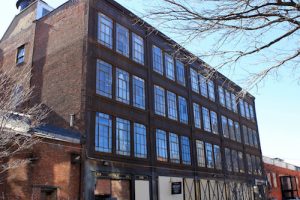 Rounding off our list, the Hecla Iron Works Building (100-118 North 11th Street) is technically in Williamsburg, but its significance to the city makes it too interesting to leave out. Hecla Iron Works, named after Mount Hekla, an active volcano in Iceland, was founded by Scandinavian immigrants Niels Poulson and Charles Michael Eger in 1876. After a series of fires in the late 19th century, Poulson and Eger built the present Hecla building as their headquarters and showroom in 1896-97. The building, landmarked in 2004, showcased the pathbreaking decorative ironwork the firm offered.

But that’s not all that earns this building its historical bonafides. In fact, the firm had deep impact on the look of New York’s built environment. Chances are, if you look around, you’ll spot some Hecla Iron Work. Just some of the firm’s notable contributions include the fence at the Dakota, Macomb’s Dam Bridge and 155th Street Viaduct, the gates of the American Fine Arts Society, the truss work and balcony of the 14th Regiment Armory, the elevators and stairs at the American Surety Company Building, the elevators and grillwork at the New York Life Insurance Company Building, interior and exterior work at the New York Stock Exchange, the marquee and windows of the St. Regis Hotel, the marquees and grillwork at B. Altman’s Department Store, the windows at Grand Central Terminal and the original 133 entrance kiosks for the IRT subway system.