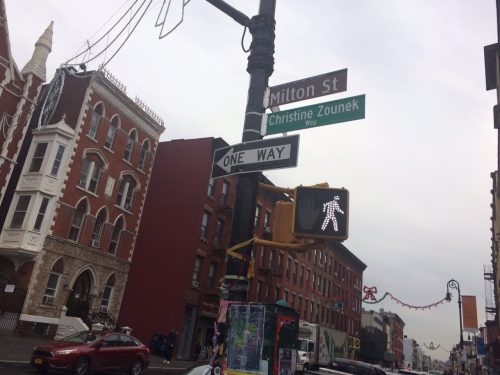 This Thanksgiving, I am deeply grateful to be part of the wonderful community here in Greenpoint. It is an honor to celebrate the work and legacy of Christine Zounek, a beloved Greenpoint resident who passed away in 2014. In September, Milton Street was co-named for Christine. Christine was head chef and guiding light at The Greenpoint Church Hunger Program, located at 136 Milton Street, now, appropriately, Christine Zounek Way.

The Hunger Program, a volunteer-based organization, serves dinner Wednesday evenings from 6 – 7pm, and runs a food pantry Thursday mornings from 8 – 11am. The Program serves over 800 people every month, and welcomes between 60 and 80 people every week for the community meal. The program and its volunteers “work really hard to provide the most delicious free meal you’ll ever eat. Our chefs are top-notch, and they take pride in serving gourmet food to everyone who comes through our doors.”

Christine Zounek was instrumental in making that meal delicious and special. According to Pastor Ann Kansfield of the Greenpoint Reform Church, Christine was involved with the program, “almost from the start,” when the church began running the soup kitchen in 2007. Each week “she made meals infused with love and care,” and “was an integral part of feeding our neighbors” for seven years.

Christine lived on Milton Street, and got involved with the Hunger Program as a way to do service for the community. She had a personal connection to those she served. Christine told the New York Times in 2008, “You get to know everybody and you look forward to them, and seeing them every week. These are the people I’ve been seeing on Greenpoint Avenue for 11 years, and now I know them all. I know all their names.” And they knew her, too. Pastor Ann explained, “her death left a huge hole in the community of Greenpoint. It was impossible to talk to her and not to leave the conversation happier than you were before.”

Christine saw herself in the people she served. According to Pastor Ann, “she would often say, ‘that could be me,’ or ‘that was me,’ and “she often connected the work she did at the soup kitchen to her continued sobriety. She often said the way she stayed sober was living a life of service to others.”

To honor Christine, you can make a donation in her name to support the soup kitchen, or says Pastor Ann, “she loved service, and if people want to give service by volunteering that would be wonderful, but being kind to a homeless person, or to someone on the margins of society, is the best way to honor her…Joining her in sharing her love for others is the best way to honor her.”

If you’d like to give service with the Greenpoint Hunger Program, you can sign up to volunteer here. The Program needs volunteers to help cook, set up, serve and clean from 2:00 – 7:30 p.m. on Wednesdays, and from 7:30 – 11:30 a.m. on Thursdays. The program also accepts donations, as it costs about “about $5,000 per week to host the meal and keep food pantry running.” You can donate here.