Romance is Not Dead in Williamsburg, or on Craigslist #m4w

We stumbled upon this beautifully written Craigslist missed connection and felt compelled to share it with our readers in hopes of tracking down the woman in question. In summary: a gentleman was in town from Seattle, met a well-read, NYC Marathon-loving dame at Egg (109 N 3rd St), and they shared a moment over the New York Times. If you are the Williamsburg woman this cunning linguist is looking for, please let us know; we’re dying to hear how this story ends. And for godsakes, go chase this fellow down in Seattle. All the good ones in New York are taken.

Conversation about the NYC Marathon at Egg on Monday, redux – m4w (Egg – Williamsburg)

If this was a fool’s errand before (and it was), it definitely enters uncharted realms of hopelessness now. But I feel compelled to try one last time all the same…

It was Monday morning, 11/6, around 10:00am or so when I walked into Egg in Williamsburg, and you were there alone by the door reading the Marathon section of the NY Times. I asked you where you’d found it, and you replied by telling me it was already there and giving it to me in one fell swoop. That was the first indication, however small, of your exceptionally kind and generous nature. It was then swiftly revealed in greater fullness in the course of our ensuing conversation by the manner in which you spoke, and the things that you said. Simple, common phrases like, “Enjoy your breakfast,” and, “Take care. It was nice meeting you,” assumed new layers of meaning and sincerity when you uttered them. You mentioned watching the marathon in Greenpoint and being incredibly moved by it, which further speaks to your generosity of spirit, too. Seldom, if ever, have I encountered someone whose graciousness is so unmistakable and pure.

I live in Seattle, and was only in New York to run the race. You, or anyone you know (who knows it is you of whom I speak), is unlikely to ever see this, and we’re unlikely to ever speak or see each other again. But I prefer to cling to the possibility of a different narrative unfolding, however remote and improbable. And stranger things happen via the Internet all the time. Is it really so absurd to hope for a little longer, at least, to be added to those wondrous annals of fortuitous occurrences? 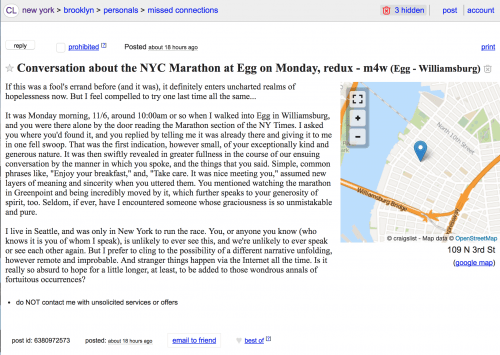