A lot of people drive cross country from New York to California, but few people do it with a larger social and political message as a goal. On August 8th, Australian-born local street artist and Northern Territory owner Jamie Toll and his wife—Colombian immigrant, actress and filmmaker Paola Baldion—will do just that, while making a completely unique trip. For two months they will travel across America providing free DNA tests to total strangers, and then on the return leg of their journey they’ll interview the recipients of the kits about their DNA discoveries for a documentary film the couple plan to make while on the road.

Jamie and Paola conceived the trip after the success of Paola’s You Tube video, which went viral garnering 30 million hits! They will partner up with the genetic research company myHeritage DNA to shoot the documentary project I Am Migration. 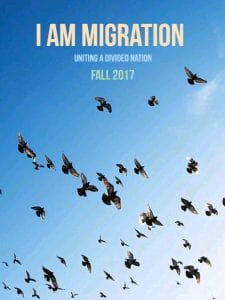 Their goal is to raise awareness and encourage the media to stop portraying immigration as a threat, as they believe that we are all a product of migration. The couple will travel to, and film in, the following cities: Paterson, New Jersey; Wheeling, West Virginia; Independence, Missouri; Brigham City, Utah; and Truckee, California.

Jamie and Paola are seeking families, neighbors or coworkers in those cities who are ethnically and culturally diverse but share the same surroundings. They are also casting people who claim to be 100 percent American or who have strong ties to one of the 5 towns they are visiting.

Like many Australian natives, Jamie did not know of his own ethnic makeup until he recently took a DNA test. His discovery that he was 62% Southern Irish shocked him and he is sure that many of the people he meets along the way will be equally as surprised by their findings. Hopefully the documentary film that they make will be as successful as Paola’s You Tube video. But one thing is certain—it will be the trip of a lifetime, and one that will open a lot of eyes.