More info – FREE. RSVP doesn’t guarantee entry, and they encourage everyone to arrive a early to claim a spot.

SUMMERSCREEN — MOVIES IN MCCARREN
If you’ve been anywhere near North Brooklyn during the summer, you’ve probably been to at least one SummerScreen in McCarren Park. It’s now been around for a dozen years, and as a favorite summer activity in the ‘hood, it’s still going strong. In addition to movie screenings, the evening includes musical performances too, so it’s a great way to catch some local acts you might not have seen before and kick back before the film starts. Also, there’s food trucks, booze and doggies! The screenings take place on Wednesdays in July and August, with doors at 6pm, music at 7pm and the films starting around sundown/8pm-ish. Bring blankets, chairs, pillows, snacks, cash and your pup!

More info – FREE. RSVP online to give organizers a headcount, and it’s not a bad idea to get there early to set up camp. 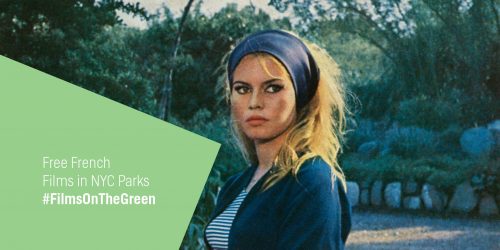 FILMS ON THE GREEN — FRENCH FILMS IN TRANSMITTER PARK
In its landmark 10th year, Films on the Green will present French cinema through the eyes of 10 guest curators and some of the most creative and compelling filmmakers, actors, and artists of our time. The works of Leos Carax and Jean-Luc Godard will be showcased in Greenpoint at Transmitter Park. The schedule: