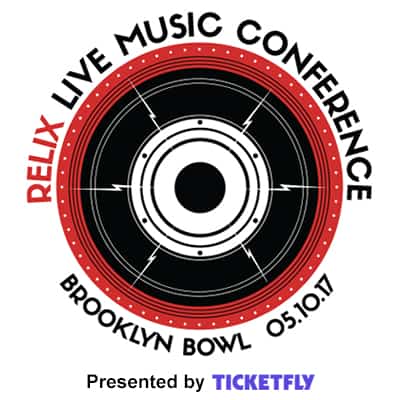 Yesterday Brooklyn Bowl (61 Wythe Ave) hosted the first ever Relix Live Music Conference, which featured a full day’s schedule of panel discussions and presentations capped with a very special keynote presentation. Sold out and live-streaming on Nugs.net, this new conference, spearheaded by Relix’s own Bradley Tucker, progressed without a hitch before a mixed crowd of music industry professionals, journalists, aspiring yuppies, intrigued hippies, and a smattering of NYU students.

The kickoff discussion, titled TALENT BUYING: Where It All Begins, featured panelists including Ben Baruch, Michael Dorf, AEG’s Don Strasburg, and Bowery Presents execs Jim Glancy and John Moore. Of course the question on everyone’s mind revolved around AEG buying up Bowery Presents and separately, subsequently opening Brooklyn Steel… Does this move continue the monopolization of the live music scene (in NYC) or is it an equalizer against the beast that is Live Nation?

No one seemed to have an answer, though I think it was Michael Dorf (City Winery) who seemed pleased that artists would have an option to work with someone other than Live Nation. And John Moore (Bowery Presents), faced with the immediate success of Brooklyn Steel, deftly navigated his talking points, saying, “The honeymoon has been great but I think it will be a couple of years before we can really determine how successful it is.”

Next up at the Relix Live Music Conference was the FESTIVALS panel, which immediately fell into the Fyre Fest boobytrap with panelist Janine Small leading the charge, saying that some of the Instagram models, nay “influencers” could (or should?) be charged with crimes by the FCC for their promotional involvement. But moderator Dean Budnick (Relix Media Group) was able to steer the conversation back on track: Festivals are all about logistics and location.

CID Founder and CEO Dan Berkowitz has spent 10 years figuring this out. “In its peak form,” Berkowitz says of a festival experience. “It’s a cultural happening.” And these latest Riviera Maya, Mexico shows CID has produced certainly demonstrates that. Berkowitz broke it down for us: “We built a stage, 15 feet stage right to the beach and 100 yards stage left to the jungle, a beautiful location, and then we filled hotels. Versus Fyre Festival, which was in a terrible location, prohibited by customs, in a small, isolated island. I bet a lot of their gear is still locked up in customs.”

Meanwhile, Robin McNicol at SuperFly, is producing a totally unique hybrid festival out in San Francisco in June called ClusterFest. And Dave Frey’s Lockn’ Festival is about to have its biggest year yet in Virginia this August with acts like Phil Lesh with Bob Weir, Joe Russo’s Almost Dead, String Cheese Incident, and just about every other jam band on Earth.

Following those panels the Relix Music Conference scheduled a trio of presentations: HeadCount Executive Director Andy Bernstein; Josh Baron, Biz Dev at SongKick; and META.is Founder/CEO Justin Bolognino (previously profiled in Greenpointers); each of whom lead fantastic presentations on the specialties of their business.

Andy Bernstein, HeadCount, who also wrote The Pharmer’s Almanac, showcased a few, very accessible ways to support local activism through concerts, first citing a $1 surcharge on tickets, which would be donated to local organizations. Last year, 60 million tickets were bought and sold in North America, which, with a plus $1 program, would be “enough to fund multiple revolutions,” Bernstein said.

Justin Bolognino, Founder/CEO of META, focused on the virtual, augmented, and otherwise technological aspects of the musical experience, but cautioned everyone that these techs are merely tools to support storytelling and experiences. “No amount of tech, VR, LED lights will make up for emotion and human storytelling,” Bolognino said. “The story must be the driver, the tech is just the car.”

After a short lunch, lovingly catered by Brooklyn Bowl’s Blue Ribbon Fried Chicken, the program for the Relix Live Music Conference returned to a series of panel discussions, including one titled PUBLICITY: Pressing Engagements.

While moderator Mike Greenhaus (Relix Media Group) did a good job of keeping the panelists on subject, quite frankly, there wasn’t much to wax poetic on: the goal of publicists is to keep their clients relevant, tell stories, and find new ways to poke journalists. Sure, there are various strategies to achieve this, one of which is the slow leak on social media, “the drip”, as described by Ken Weinstein (Big Hassle Media).

“The album is the Superbowl,” said Jonathan Azu of Red Light Management. “But there’s still a regular season.” And he added: “What management does is help artists see who is in the mirror.”

The AGENTING panel, moderated by Brooklyn Bowl’s own talent buyer, Lucas Sacks, seemed to fixate on the question of To Festival, or Not To Festival… One agreed upon piece of advice for talent, agents, and management alike: “Don’t worry about where you are on the poster,” one of the panelists said. “Worry about your set time.”

Everyone seemed very concerned with radius clauses in regards to festivals, like, for example, The Firefly Festival, whose radius clause “knocks out six markets.”

When asked about what’s next, leading Umphrey’s McGee into their 20th year, Iwinski said, “It’s just going to get weirder. If the fans get bored, if the band gets bored, well, then we’ll all end up selling insurance.”

Szufnarowski then asked what a manager does beyond ask for an increase in a play offers then quickly retracted his question, and apologized saying, “That’s something you ask on a bad date, like, ok, you talk for a while…” The crowd laughed and lightened the room but some panelists still chose to answer, namely, Vince Iwinski, who said managers “help the band realize when to take calculated risks,” for example ticket revenue share versus guaranteed payment.

And when an audience member asked for advice, we got some: “Be nice to everyone, because you never know when they’re going to come back in your career.” And another: “Work hard and get dirty with it, but it should be a fun time so be sure to get your rest.”

And then we had the KEYNOTE presentation, which was by far the most entertaining portion of the conference. Ron Delsener deserves his own talk show. For those of you who don’t know, Delsener is the promoter who booked David Bowie’s debut concert at Carnegie Hall on the Ziggy Stardust Tour in 1972. He booked Bob Dylan when he went electric at Forest Hills Stadium. He booked The Beatles at Forest Hills too, in 1964. The list goes on and on.

And there he was on stage with the highly accredited Peter Shapiro and rock journalist icon David Fricke sharing war stories and bragging rights over a bottle of scotch.

“First you have to be an ass kisser,” Ronny Delsener said, immediately charming the audience. What even was the question?

Lamenting the difficulties of the promoter business, Delsener said, “It’s like the movie theaters: the promoter only makes money on the popcorn. 95% of the door goes to the band.”

“That’s why we gotta do daytime conference!” Shapiro jabbed.

“We really are the banker,” Delsener said. “That’s why the bigger guys, Live Nation, AEG, are getting into the business.”

Delsener also delved into his earlier days on the road with The Ford Motor Company, hosting events and competitions on college campuses in the 1950s: the campus fraternity that could fit the most guys into the car, would win the car!

The Relix Live Music Conference keynote discussion also included a chat on rising ticket prices, the (terrible) sightlines of The Wetlands, the need for political activism within the music community, and the art market. David Fricke could barely get a word in as Delsener and Shapiro continued to playfully chide and jab at each other while putting a significant dent in that bottle of scotch.

Everytime Brooklyn Bowl came up, Delsener quickly cut Shapiro off, saying, “This isn’t an ad for your bowling alley.” Then once quickly adding, “But I have a bowling ball in the truck, because why not?”

Having started in the late 1950s and early 1960s, championing the No Nukes movement and hosting massive free concerts in Central Park, Delsener misses the activist element, saying, nowadays, “Everyone is too busy emailing each other. But now activism is more important than ever with this madman in office.”

Though these days Delsener is content working in real estate and collecting art, contemporary works by artists like Damien Hirst.

“You miss the shows though,” Shapiro said.

“Yeah,” Delsener admitted. “But now no one’s coming over the bar at me with a knife!”