Pizzeria La Ferrera is an intimate and casual pizza supper club hosted by Molly Baker (a graphic designer) and Jason LaFerrera (a software developer) inside a Greenpoint apartment. If you’re one of the lucky few who’s attended, you chowed down on one or more of the 256 pizzas—weighing in at 292 pounds—that they made last year (the pies weren’t all different, but still that’s a LOT of pizza). About 4-6 people attend each supper club event, and 6-8 pizzas are served at each one—which is an average of 1.4 pizzas per person. Mmmmmmm. Pizza. To find out how more about Pizzeria LaFerrera and to snag an invite to their next event, sign up for the mailing list here. After the jump, read their Year In Review—fun stats about all the ‘za they made last year.

-They used 2 gallons of olive oil, made mozzarella 4 times from scratch, went through 6 pounds of salt, used 14 pounds of sausage, drank 624 beers, and 54 bottles of wine were opened.

-One person traveled 3,964 miles to eat their cheesy goodness

-104 pounds of flour were used 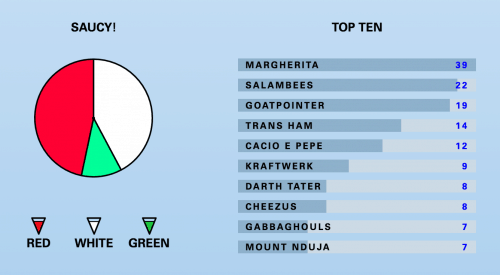